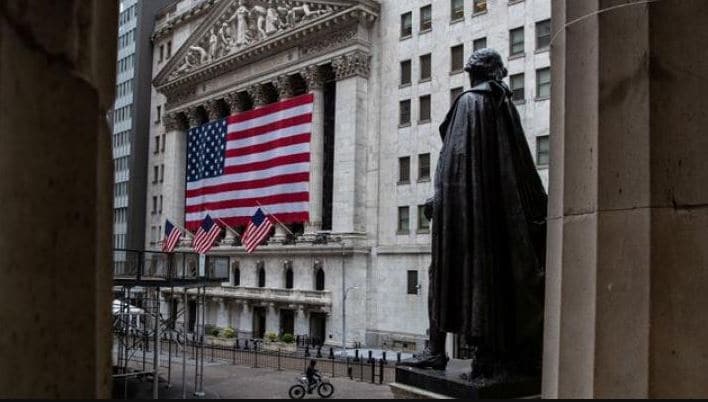 After the big sell-off the last two trading days, Friday and Monday, investors returned to the floor, buying equities on the cheap. Even though the whole picture of the global economy looks as gloomy as can be, investors continue to ignore the hard facts, all profit warnings, recession outlooks, etc. and pump up the markets.

But it is not only the poor economic prospects and sharply rising unemployment figures worldwide but also the ongoing tensions between the USA and China that are causing comfort pains. Investors should, therefore, be extremely cautious and not rush or even FOMO into the market.

On the positive side of things, corona headlines are lessening, and many countries are almost ready to open up slowly again.

Wall Street showed its friendly side on Tuesday. The Dow Jones opened firmer and in the meantime built up profits solidly. But the strong upward trend could not be maintained. In the end, a premium of 0.56 per cent to 23,883.09 points was on the board. The NASDAQ Composite was also able to gain: It closed the day 1.13 per cent stronger at 8,809.12 points.

The easing efforts in particular – also in the USA – created a good mood. In addition, oil prices, which at times rose by double digits, got investors in a buying mood. Stock market experts justified the fact that the prices did not remain at their daily high by pointing out that the rhetoric between the USA and China remains sharp. This feeds the fear of a resurgence of the Sino-American trade war.

On Tuesday, trading on the important Asian markets was suspended due to public holidays. There was no trading in Japan, mainland China and South Korea. In Hong Kong, prices followed positive indications from Wall Street, with the Hang Seng gaining 1.08 per cent to 23,868.66 units.

Investors on Europe’s stock exchanges also took action on Tuesday. The EuroSTOXX 50 had already firmed up at the opening and finally closed with a plus of 2.11 per cent at 2,875.91 points.

Nervousness on the European financial markets was caused in the morning by the ruling of the German Federal Constitutional Court on the European Central Bank’s (ECB) purchases of government bonds worth billions. The judges in Karlsruhe criticised that the ECB’s purchase of government bonds was partly in breach of the German constitution because the Federal Government and the Bundestag did not examine the ECB’s decisions.

The euro came under massive pressure, partly due to the court ruling from Germany. The European common currency fell to $1.0826 in the meantime and was only able to recover slightly to $1.0845 by the evening. In the morning, the euro was still trading above 1.09 US dollars. The yield of ten-year German government bonds rose slightly and at times was minus 0.517 per cent. At the same time, the yield on ten-year Italian government bonds rose to as much as 1.85 per cent. The risk premium on Italian papers widened.

Oil prices rose significantly on Tuesday. Traders cited hope for a smaller supply glut as the reason. A barrel of North Sea Brent crude costs $30.21 at the end of the day. That was $2.24 more than the previous day. The price of a barrel of US grade WTI rose by $2.92 to $24.02.

The Corona crisis has hit many industries hard. The tourism sector has been walloped at times. Now one of the world’s largest cruise companies, Norwegian Cruise Line, is warning that the company may not survive the pandemic.

For Norwegian Cruise Line, it is a pitch-black Tuesday. In a statement to the US Securities and Exchange Commission (SEC), the company is telling its investors that the end of the shipping company may have come. There are “considerable doubts” that the company is able to continue operations due to the COVID 19 pandemic. At least that was what the auditing company of Norwegian Cruise Line Holdings had found out.

Norwegian Cruise Line is not the only shipping company that is in considerable difficulties due to the Corona pandemic. But for example its competitor Carnival announced only yesterday that it intends to offer cruises again in August.

The end of Comdirect

The online bank Comdirect disappears from the stock exchange list after 20 years. Commerzbank integrates its online subsidiary. The Frankfurt financial institution is allowed to squeeze the remaining minority shareholders out of the company through cash compensation. The way for this so-called squeeze-out was cleared by the Comdirect annual general meeting on Tuesday with a large majority of votes (99.6 per cent). The remaining shareholders will receive 12.75 euros per share, slightly less than the Comdirect share was last worth on the stock exchange. Originally, Commerzbank only wanted to pay a settlement of 11.44 euros per share.

Commerzbank had announced in September that it wanted to integrate Comdirect fully. This is because business models are becoming increasingly similar in the course of digitalisation. The Commerzbank board of managing directors expects synergies of up to 150 million euros per year to be realised.