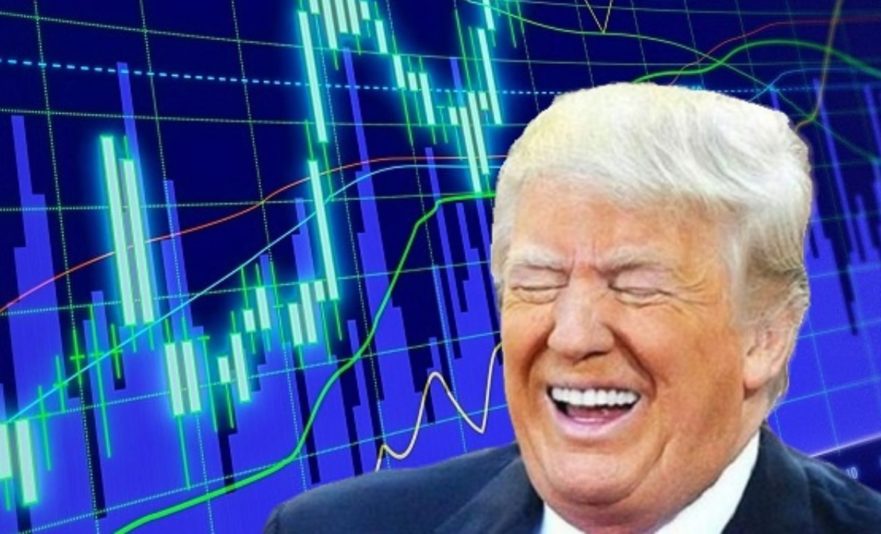 It started off as a promising day for the stock markets with prices and indices rising nice and smoothly throughout the day. The markets reacted friendly to the news that President Donald Trump was feeling better and had been discharged from the hospital. But during the late US session, it was no one less than Trump himself who sent the markets back down the elevator – once again with just one tweet.

Trump rejected the Democrats’ proposed next aid package of $2.4 trillion and postponed further negotiations until after the November elections. This was a strong damper for the stock market bulls, who until shortly before had clearly bet on the agreement of a further aid package.

The most important support for the markets in these uncertain times was the hope for an agreement between Republicans and Democrats on a new economic stimulus package. Treasury Secretary Steven Mnuchin and House Speaker Nancy Pelosi had discussed details before Trump took the sledgehammer out.

According to Federal Reserve Chairman Jerome Powell, the recovery of the US economy is still on shaky ground. The economy could be caught in a downward spiral if the virus is not effectively contained, Powell said in his speech.

Businesses and households need more support. “Too little aid would lead to a weak recovery, creating unnecessary hardship for households and businesses,” he warned. Even if, in the end, the steps were greater than necessary, they would not have been wasted. “The recovery will be more robust and progress faster.”

In line with the issues mentioned above, Wall Street took a hit and had to accept heavy losses at the end of trading.

At the start on Wall Street, the Dow Jones was still able to gain 0.23 per cent to 28,214.24 points and remained in the profit zone for a long time afterwards. Later in the day, the mood changed, the stock market barometer slipped into a clear minus and ended the day with a discount of 1.35 per cent at 27,769.80 points. In contrast, the NASDAQ Composite was already weaker during the trading period and extended its losses even further. The stock market barometer closed with a minus of 1.57 per cent at 11,154.60 index units.

In Japan and Hong Kong, things were looking up on Tuesday. The Nikkei finally increased by 0.52 per cent to 23,433.73 points. Trading in Shanghai continued to be suspended for public holidays. Most recently, the Shanghai Composite had lost 0.20 per cent to 3,218.05 points on Wednesday. Hong Kong’s Hang Seng index rose 0.9 per cent to 23,980.65 points at the close of trading on Tuesday.

Market participants continued to follow with excitement all news on the improvement of the health status of US President Donald Trump. Trump had been released from the hospital and returned to the White House. However, his doctors have not yet given the all-clear.

On Tuesday, investors on the European markets were in a buying mood until the close of trading. After a friendly start, the EuroSTOXX 50 temporarily slipped into the red but was then able to work its way back up and finally closed with a gain of 0.41 per cent at 3,233.30 points.

After a deep fall in the morning to 12,779 points, surprisingly robust industrial data from Germany ensured a substantial catch-up, at the end of which the leading German index climbed to 12,906.02 points, 0.6 per cent or 77.7 points more than the previous day. The TecDAX also changed its sign several times in the further course of the day after a firmer opening of the stock market, but in the evening it left trading with a loss of 0.41 per cent at 3,110.47 points.

Positive indications also came from the USA and Asia.

On the Forex market, the euro exchange rate today temporarily rose above 1.18 US dollars. In the afternoon it was trading only slightly lower at 1.1789 US dollars. The common currency thus continued its gains of the previous day. The euro was mainly supported on Tuesday by robust industrial data from Germany. The German industry had received more orders in August than expected.

On the commodities market, oil prices extended their significant gains of the previous day. Investors had previously become more optimistic concerning another US aid package for the economy, which was hit by the corona crisis. Most recently, the barrel price for North Sea Brent rose by 1.25 US dollars to 42.54 US dollars. The US variety West Texas Intermediate (WTI) even rose by 1.39 US dollars to 40.62 US dollars per barrel.

After further gains in the morning and afternoon, precious metal prices plummeted in synch with equities and other assets after Donald Trump’s latest infamous tweet. In the day, the gold price had risen as high as to $1,921 before being sent to just $1,875 per troy ounce at day’s end!

Similarly, cryptocurrencies were on the rise during the day, before falling sharply. Bitcoin lost 1.5 per cent to $10,500 on the daily chart. Ethereum and XRP even declined by over 3 per cent to $339 and $0.2450 respectively.

The German industry received more orders in August than expected. Compared to August, 4.5 per cent more orders were received, according to the Federal Statistical Office. Analysts had only expected an average increase of 2.8 per cent. Compared with February, when the pandemic had not yet hit Germany and the world, orders are still 3.6 per cent lower.

Other economic data also show positive trends for the industrial sector: the Ifo production expectations of German industrial companies for the coming months improved in September. The indicator rose by 5.2 to 20.8 points, according to the Munich-based Ifo Institute.

Due to the still extremely weak flight operations, the aviation industry is burning up around 77 billion dollars in the current half-year according to estimates by the airline association IATA.

This is almost 13 billion dollars per month or 300,000 dollars per minute, the international association announced on Tuesday. “We are facing some tough winter months for airlines, with cash flows always weak due to seasonal factors,” said IATA Chief Economist Brian Pearce. “We see airlines getting into trouble or even failing if they don’t get further government support or have the ability to tap the capital markets for more money”.

Because of the slow recovery around tourism and flying, the industry will probably continue to lose an average of five to six billion dollars a month next year. Despite cost savings of around 50 per cent, the airlines will have lost around 80 per cent of their revenues in the second quarter of 2020. IATA does not expect the industry to achieve a positive cash flow before 2022.