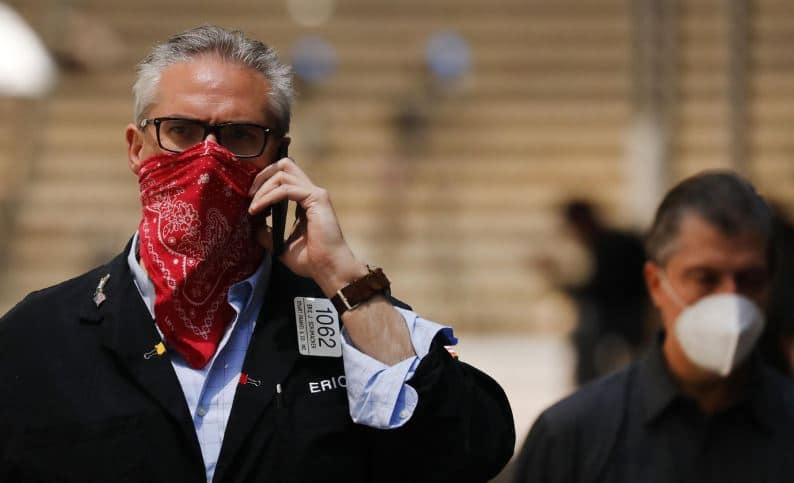 After the strong start to the week, the stock markets have today shifted back a gear. Recent horror reports about continuously rising infection numbers, especially from the USA, made more and more investors and traders nervous on today’s trading day. Some investors also cashed in and took profit after the stock market rallied in the past few days.

The possible consequences of the recent rapid spread of the virus continue to smoulder in the background as stress factors. In the USA, for example, the number of new infections has risen steadily since mid-June as a result of the relaxation of regulations. However, the fact that caution has currently increased again is probably also connected with the coming reporting season in the USA. The quarterly reports are likely to paint a rather bleak picture.

On Monday, the Asian stock markets did not find a common direction.

After the substantial gains on Monday and in the previous week, some trading centres experienced a setback. The sentiment was depressed by a six-week curfew over Melbourne, Australia’s second-largest city, due to a renewed “sharp rise” in coronavirus infections. Market participants put heavy selling pressure on Australia’s ASX index after the drastic measures were announced. Overall, Australia did not see high infection numbers, not even speaking about corona related deaths during the global health crisis, which makes the newly introduced measures appear strange at least.

After the strong start to the week, profit-taking occurred. Given the strong recovery in recent months, investors’ fear of “sensitive setbacks” is latently great, according to some market observers. Furthermore, traders were concerned about the spread of the coronavirus in the USA and other regions.

One of the main take-aways from today’s price action in the Forex and commodities markets was the meteoric in the price of gold. Hitting its highest level since 2011, alongside the eruption in buy-side flows in the Pound Sterling amid speculation of a revival in Brexit talks were the theme of the day.

In the currency market, the euro weakened somewhat on Tuesday. Disappointing economic data from the EU currency area weighed on the euro. In the afternoon, the European common currency is exchanged for 1.1286 US dollars, after trading above $1.13 during the Asian session.

Oil prices rose again somewhat on Tuesday. A barrel of Brent crude last cost 43.29 US dollars, 21 cents more than the day before. A barrel of the American type West Texas Intermediate (WTI) rose by 6 cents to $40.71.

Gold, the “anti-crisis currency”, continued its incredible ascend and rose by 0.5 per cent to 1,794 US dollars per troy ounce and reached its highest level in over eight years (November 2011).

In the cryptocurrency space, we are witnessing a renewed trend of altcoins outperforming the two largest digital assets by market capitalization Bitcoin and Ethereum. Especially Cardano is flying and even surpassed Bitcoin SV with a 25.6 per cent gain on the daily and a weekly increase of a whopping 56.2 per cent to now over $0.13. XRP, the most controversial digital asset, also continues to make big moves with a 7.6 per cent gain on the day to now $0.1980. Bitcoin, on the other hand, only posted a marginal value appreciation of 0.1 per cent to $9,270, while Ethereum managed to increase by 1.9 per cent to $240.

Deutsche Bank is teaming up with Google. The financial institution announced that it is entering into a global strategic partnership. A corresponding letter of intent has been signed. In the coming months, a multi-year contract is to seal the future business relationship between Germany’s largest financial institution and the US technology group. According to the agreement, Google will provide Deutsche Bank with cloud services and new technology-based products will be developed.

Passenger numbers at Frankfurt Airport continued to improve slightly last week but remain at a very low level due to the corona crisis. In the week from June 29 to July 5, the airport operator Fraport counted about 251,000 passengers at Germany’s largest airport, 83.3 per cent less than a year earlier, according to a list on the Frankfurt Group’s website. This was approximately 78,000 passengers more than a week earlier when the decline had been 89.3 per cent.

The number of aircraft movements fell last week by 71.2 per cent year-on-year to 3,074 takeoffs and landings. This figure also improved in a weekly comparison. Many airlines have been offering more flights again since June after passenger traffic had collapsed since the end of March due to global travel restrictions.

German ECB Director Isabel Schnabel sees signs that the recession in the eurozone could be milder than feared.

This was suggested by some positive “confidence indicators” from the past few weeks, she told the Dutch newspaper NRC Handelsblad. “Overall, however, we are within the range of our baseline scenario.” The ECB and also the EU Commission expect the eurozone economy to fall by 8.7% this year, but to recover in the second half of the year.

This is also supported by the so-called purchasing manager index of the IHS Markit institute. The barometer for the eurozone rose to 48.5 points in June from 31.9 points in May, thus approaching the growth threshold of 50 points. “This signals that the eurozone has been remarkably quick to extricate itself from its corona pandemic emergency,” said Markit chief economist Chris Williamson.