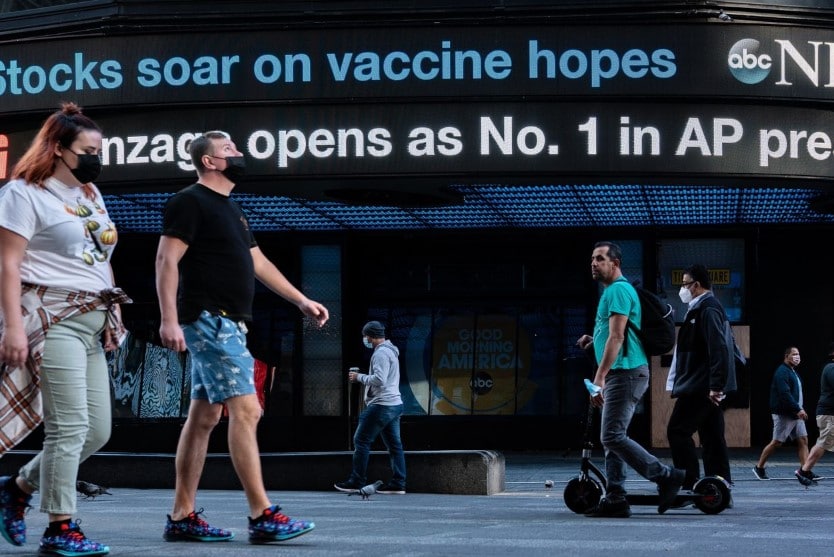 While in most other parts of the world investors and stock market participants have been somewhat cautious lately, the record-rally on Wall Street continues.

The apparent reason for the never-ending course fireworks is the corona vaccine hopes, coupled with additional hoped-for aid money from central banks and governments. That with all these hopes the actual situation is completely ignored, surprises nobody in this day and age. Many existences are facing economic ruin, health care systems are threatening to collapse, but market players are happier about the corona beneficiaries.

Coming Thursday, investors will be eagerly watching the ECB’s interest rate meeting. Due to the second wave of the pandemic, experts expected a comprehensive new crisis package. The guardians of the currency are likely to expand the PEPP bond purchase program by an estimated 600 billion euros. ECB President Christine Lagarde recently announced that she would react to the second wave of the Corona pandemic. “The ECB was there in the first wave, and it will be there in the second wave,” the Frenchwoman emphasizes.

Nevertheless, the ongoing corona pandemic and tensions between the USA and China weighed on market sentiment. After the US government had imposed new sanctions on the People’s Republic, the latter now announced that it was preparing retaliatory measures.

Meanwhile, no agreement was reached in the US Congress on an economic stimulus package. The negotiations for a Brexit deal are also causing uncertainty among market participants.

Fears that had already been expressed on the markets the previous day had come true: In the dispute over Hong Kong’s autonomy, the USA imposed further sanctions on Beijing.

The corona pandemic also remained a further burdening factor, as the number of cases of infection is rising again in individual Asian countries. But the situation in America and Europe is also seen as a strain on the global economy.

The European stock markets also saw a slight downward trend on the second trading day of the week. The EuroSTOXX 50 ended trading 0.12 per cent down at 3,525 points.

Also, at the German stock market, there was not much happening today. The Dax closed almost unchanged at 13,278 points. Inspired by the NASDAQ in New York, the TecDAX meanwhile closed 0.43 per cent stronger at 3,137.05 points.

There was no further progress in the Brexit negotiations: Two telephone calls between EU Commission President Ursula von der Leyen and Prime Minister Boris Johnson were unsuccessful – now the British Prime Minister is travelling to Brussels to meet Ursula von der Leyen in person. Besides, the Corona Pandemic and the associated restrictions on public life remained in the focus of investors.

The euro exchange rate tended to weaken in late US Forex trading. Most recently, the common currency was quoted at 1.2105 US dollars. On the other hand, the failure to achieve a breakthrough in the Brexit negotiations is weighing on the British pound. The sterling fell by 0.6 per cent to 1.3295 US dollars and 1.0972 euros.

Oil prices fell again slightly today, but there were no major price fluctuations. North Sea Brent oil traded 2 cents lower today at 48.77 US dollars. The US light oil grade WTI fell by 19 cents to 45.57 US dollars.

Gold climbed further and closed above $1,870 an ounce.

Cryptocurrencies were faced with strong selling pressure, even though the overall market sentiment for the digital assets space remains bullish. Bitcoin fell by 5.5 per cent to $18,150, while Ethereum lost 7.4 per cent to $547 and XRP dropping 9.3 per cent to $0.55.

The eurozone economy grew marginally less in the third quarter than previously assumed. As reported by Eurostat in its third publication, the gross domestic product (GDP) rose by 12.5 per cent compared with the previous quarter. The economists surveyed by Dow Jones Newswires had expected that the statisticians would confirm the 12.6 per cent increase reported in the second publication. Over the year as a whole, the GDP fell by 4.3 (second publication: 4.4) per cent.

Hopes for soon available corona vaccines have significantly brightened the economic expectations of German financial experts in December. According to the Centre for European Economic Research (ZEW), the ZEW sentiment barometer increased by 16.0 points to 55.0 points compared to the previous month. Analysts had expected an increase, but only to an average of 46.0 points.

During the summer months, Japan‘s economy recovered more strongly from the record slump in the wake of the Corona crisis than had previously been expected. The gross domestic product (GDP) of the world’s third-largest economy before Germany rose by 22.9 per cent in the third quarter – projected for the year as a whole – as the government in Tokyo announced on Tuesday following a second estimate. The government thus revised the first estimate slightly upwards. Previously only an annualized increase in the gross domestic product (GDP) of 21.4 per cent had been reported. Analysts had expected confirmation of the first survey.

According to revised calculations, non-agricultural productivity in the USA rose in the third quarter by 4.6 per cent over the previous quarter, seasonally adjusted and projected for the year as a whole. Economists surveyed by Dow Jones Newswires had forecast a confirmation of the preliminary figure of 4.9 per cent.

The US electric car manufacturer has announced a capital increase with a volume of 5 billion US dollars. Ten major banks will carry out the sale of the share certificates. With the fresh capital, Tesla wants to reduce its debt level and bring new car models to the market. This is already the second capital increase within three months. Besides, company boss Elon Musk announced to move from California to Texas. The Tesla shares closed with a plus of 1.3 per cent.