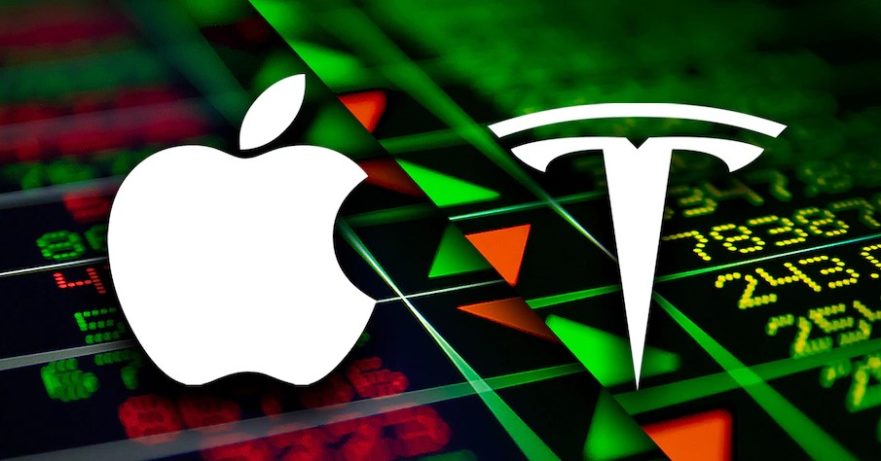 There were veritable price fireworks on the Nasdaq in New York with a price jump of over 4 per cent for the index as a whole. Tesla shares were in particular focus and gained a whopping 20 per cent in daily trading. Apple shares gained a good 4 per cent. Tech stocks had fallen significantly in recent weeks as investors worried about rising bond yields. These mean higher financing costs for governments and companies, which hurts the tech sector in particular.

The US Congress is about to pass the $1.9 trillion Corona aid package, which supported the market. Tomorrow, the US House of Representatives is expected to vote on the package, according to Democrats – the Senate had already approved it on Saturday.

Meanwhile, bond yields are coming back and are now well below the high for the year of over 1.60 per cent. On Monday, technology stocks were still under pressure due to the rise in market interest rates. On Tuesday, they recovered their losses with stabilisation in the bond markets, market participants said.

On the Far East markets, too, the majority of signs pointed to recovery on Tuesday. The Japanese benchmark index Nikkei ultimately gained 0.99 per cent to 29,027.94 points. Only on the Chinese mainland, the Shanghai Composite fell by 1.82 per cent to 3,359.29 points, while the Hang Seng posted a gain of 0.81 per cent to 28,773.23 units in the metropolis of Hong Kong.

After the losses of the previous day, the Asian markets partially recovered on Tuesday. Although economic data from Japan disappointed investors, the Nikkei 225 index remained firm. Experts had expected more robust data for the revised GDP in the fourth quarter of 2020 and household spending in January.

Investors in Europe took the momentum of the past few days with them and pushed the European indices further upwards. The EuroSTOXX 50 recorded slight losses at the start but was then able to change its sign and closed 0.61 per cent higher at 3,786.05 index units.

After the brilliant start to the week with a plus of 3.3 per cent, the leading German index continued to rise today. The DAX ultimately closed 0.40 per cent higher at 14,437.94 points. The TecDAX also ended the session with an increase of 1.71 per cent to 3,307.49 points.

The mood on the European markets remained little influenced by the Corona pandemic, as one market observer reported. Investors were now focusing instead on a strong economic recovery over the course of the year. However, rising yields in the bond markets continued to have a negative impact.

With the prospect of stronger economic development in the USA, the dollar had recently gained strength. In European morning trading, however, a slight countermovement set in on the foreign exchange market. The world’s reserve currency, the US dollar, was less in demand and came under pressure in relation to all other major currencies. The euro was last traded in New York at 1.1897 US dollars.

Oil prices ultimately fell in volatile trading on Tuesday. North Sea oil cost 67.66 US dollars per barrel in the evening, 58 cents less than the previous day. The price of American West Texas Intermediate (WTI) crude fell by 90 cents to 64.15 dollars. Despite the losses, oil prices are moving at elevated levels. The price of US oil had risen to its highest level since autumn 2018 on Monday, with Brent jumping above the $70 mark. One reason for the rising prices was the Yemeni Huthi rebels’ attack on Saudi Arabian oil facilities. However, the attack did not cause any significant damage to the oil facilities.

Amid a weakening greenback and DXI, the price of gold appreciated a lot today rose from a daily low of $1,682 to a closing price of $1,716 per troy ounce. Similarly, the silver increased against the US dollar to almost $26 per troy ounce.

Japan’s economy has continued its recovery in the final quarter of 2020, albeit slower than initially expected. According to adjusted data released by the government in Tokyo, the world’s third-largest economy ahead of Germany grew by 11.7 per cent over the year. Initially, official statisticians had calculated an increase in the gross domestic product (GDP) of 12.7 per cent. In the previous quarter, Japan’s GDP had already increased by 22.9 per cent. It was the first time in three quarters that the country’s economy picked up again after the island nation had previously slipped into a severe recession in the wake of the corona pandemic. Quarter on quarter, Japan’s economy grew by 2.8 per cent. On the other hand, Japan’s economy shrank by 4.8 per cent over the entire past calendar year.

The German economy increased its exports in January despite the Corona crisis. Exporters sold 1.4 per cent more abroad than in the previous month, adjusted for calendar and seasonal effects, according to the Federal Statistical Office (Destatis). Economists surveyed by Dow Jones Newswires, however, had anticipated a minus of 1.8 per cent.

The economy in the eurozone shrank somewhat more in the fourth quarter of 2020 than previously reported. As the statistics authority Eurostat announced in a third publication, gross domestic product (GDP) fell by 0.7 per cent compared to the previous quarter.