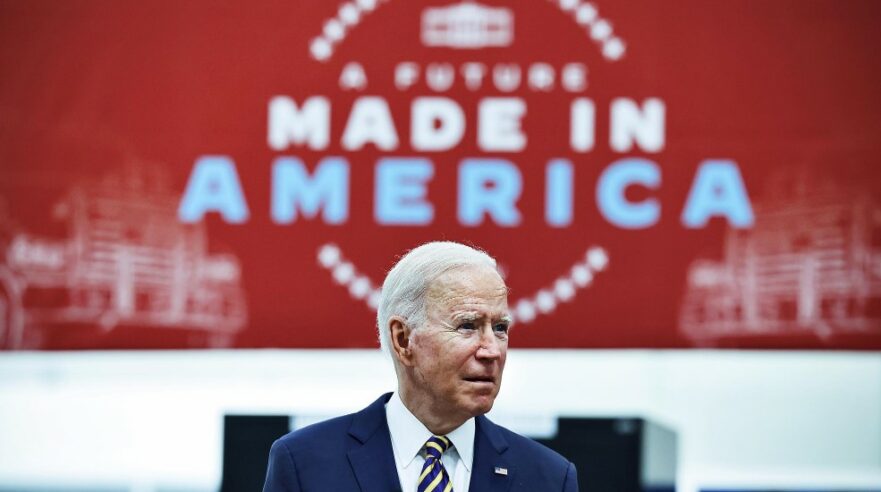 Today, the US Senate finally voted in favour of President Joe Biden’s billion-dollar infrastructure package with votes from both parties. Although the plan for the most extensive nationwide overhaul of roads, bridges and airports in decades cleared an important hurdle, House Democratic Leader Nancy Pelosi said her chamber would not take up the bill until the Senate had also passed a second $3.5 trillion package that is controversial among Republicans. This means that it could be months before the infrastructure package is presented to Biden for his signature.

Meanwhile, US investors acted with caution before new inflation data on Wednesday. Standard stocks remained the favourites. The Dow Jones and the S&P-500 reached new highs, while in Germany, the DAX fell just short.

Given the increasingly intense debate on the imminent reduction of bond purchases, tomorrow’s publication of the US inflation rate for July will be under particular scrutiny. The majority expects another five before the decimal point, and “the longer the five before the decimal point, the greater the pressure on the US Federal Reserve to act, experts say. Currently, the Fed is still buying bonds for 120 billion dollars a month.

Wall Street investors took a breather in today’s trading session. The Dow Jones opened with a marginal gain and extended this in the further course of trading. By the end of Tuesday trading, the index had gained 0.46 per cent to 35,264.67 points. The NASDAQ Composite, on the other hand, ultimately lost 0.49 per cent to 14,788.09 points, although it had risen slightly at the start.

The adoption of the enormous infrastructure package today was no longer a surprise. Cryptocurrency investors received the passing of the bill with positive amendments for the digital assets space with relief. However, the focus is also on the inflation data due in the middle of the week, as investors are hoping that this will indicate the future monetary policy of the US Federal Reserve. Recently, the Fed has repeatedly made it clear that it considers the rise in inflation to be only temporary and is thus calming minds. However, an increasing number of experts believe that the first tightening of monetary policy is likely soon.

Other than that, the focus was on the slowly winding down reporting season. The corporate news was received mainly positively by investors.

The focus was again on the coronavirus, plus statements by Atlanta Fed President Raphael Bostic. The chairman advocated that the Fed reduce its bond purchases more quickly than in previous phases.

The European stock markets recorded gains on Tuesday. The EuroSTOXX 50 started with a slight gain and ultimately closed 0.26 per cent firmer at 4,187.82 points.

The DAX ended trading 0.16 per cent higher at 15,770.71 points in Frankfurt. In addition, the TecDAX opened with a small gain and subsequently expanded it somewhat. In the end, it closed 0.19 per cent stronger at 3,839.36 points. Notably, both the MDAX mid-cap index and the SDAX small-cap index were able to reach new record highs in Tuesday trading.

The dominant themes were the quarterly figures presented by numerous companies and the upcoming price data from the USA on a coming day.

In the course of the week, five more DAX members – Telekom, RWE, E.ON, Henkel and Deutsche Wohnen – will present their results. In addition, there are numerous second-tier figures on the agenda – so unlike in the USA, the German reporting season is not yet drawing to a close.

The Fed’s prospect of a tighter monetary policy continued to drive the dollar today, while the euro weakened further. In US currency trading, the single currency was trading at 1.1721 dollars.

Oil prices increased significantly on Tuesday. Market observers spoke of a countermovement. Previously, oil prices had fallen considerably for two trading days in a row. A stronger dollar exchange rate burdened the quotations. Brent oil rose by 1.93 dollars to 70.99 US dollars, while WTI from the United States gained 2.18 dollars to 68.66 dollars.

Precious metals, and in particular gold, consolidated somewhat today but didn’t move in any direction decisively. The troy ounce of gold traded almost unchanged, just below the $1,730 mark.

Cryptocurrencies received the hoped-for tailwind from the US Senate, where the infrastructure bill was amended positively for digital assets. Especially altcoins remained on the front foot, while Bitcoin even fell back slightly to $45,700. The biggest gainer of the top 10 cryptos was Cardano, adding 14 per cent to $1.68. XRP and Binance Coin presented themselves very strongly as well, each gaining 7 per cent to $0.87 and $375, respectively.

Car sales in China continued to decline in July. On the Chinese car market, which is immensely important for German carmakers, vehicle sales fell by 6.4 per cent compared to the previous year, the industry association PCA (China Passenger Car Association) announced in Beijing on Tuesday. The decline was thus somewhat stronger than in June. The China Association of Automobile Manufacturers (CAAM) further reported a decline last week. According to the report, the number of vehicles sold shrank by almost 14 per cent to 1.82 million units compared to the previous year. Unlike the industry association PCA, the manufacturers’ association CAAM also includes commercial vehicles in its data and measures the sales of producers to dealers. However, CAAM also emphasised that despite the decline in June and July, vehicle sales in the first seven months were still up by almost one-fifth compared to the Corona-dominated previous year.

Non-farm productivity in the US grew by an annualised 2.3 per cent in q2 of 2021 from the previous quarter, according to preliminary calculations. Economists surveyed by Dow Jones Newswires had expected productivity growth of 3.2 per cent. A revised 4.3 per cent increase in productivity was reported for the first quarter, following a preliminary estimate of a 5.4 per cent gain. The US Department of Labour further said that unit labour costs rose by 1.0 per cent in the reporting period. Economists had predicted a rise of 0.8 per cent.

The economic expectations of financial experts for Europe fell again in August. The ZEW index of economic expectations declined to 40.4 points from 63.3 points in the previous month, according to the Centre for European Economic Research (ZEW). Economists surveyed by Dow Jones Newswires had only expected a decline to 57.5 points. At 22.9 points, the third decline in a row was slightly stronger than in the previous month.