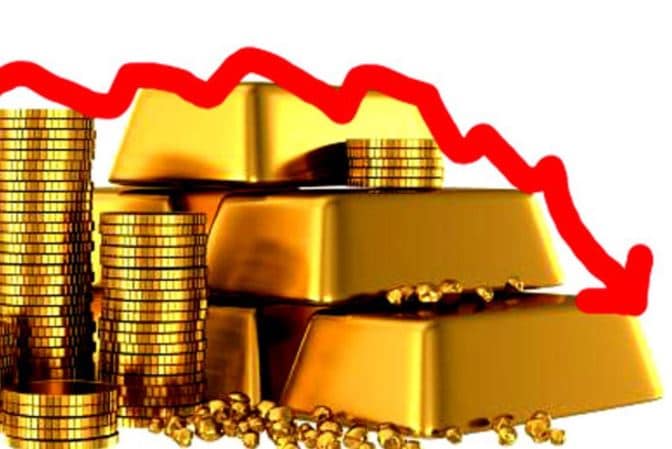 Solid economic data from Germany and a possible new economic stimulus package in the USA are again fuelling hopes of a rapid economic recovery. These factors drove prices higher today, and many places saw decent gains.

On the other side of the coin, however, is gold. With a cataclysmic sell-off of more than $200, the precious yellow metal even dropped below the $1,900 mark within the last 24 hours. On the weekly chart, this adds up to over 7 per cent in losses. Similarly, the little brother silver also continued its sharp drop and fell from over $29 close tho $24.

The mood on the US stock markets turned during the New York session, and the market closed, after a bright start, with losses.

The Dow Jones initially opened 0.61 per cent up at 27,961.64 and continued to expand its gains over the day. It even managed to break through the 28,000 point mark at some stage. Later in the day, however, the mood changed and the leading index slipped into the red, printing a minus of 0.37 per cent, closing at 27,688.29 points. The NASDAQ Composite technology index already started weaker and saw a more pronounced downward trend, finishing the day with a minus of 1.69 per cent at 10,782.82 index units.

In the meantime, hopes of an agreement between Republicans and Democrats on a new economic stimulus package grew in the markets, after representatives of both sides had recently expressed their willingness to return to the negotiating table. However, those hopes remain still on fragile feet, and negative comments from some Fed representatives about the current economic situation weighed on the markets.

Some of Asia’s stock exchanges recorded significant gains today. In Tokyo, trading was suspended on the previous day due to a public holiday, but on Tuesday the Nikkei 225 gained 1.88 per cent to 22,750.24 points.

In the USA, some hospitals reported declining corona case numbers, while traders see opportunities in the dispute between China and the USA, even though both sides imposed sanctions. An upcoming meeting sent positive signals. On the data side, the Chinese car market attracted attention, with low double-digit growth in July.

Europe’s markets posted strong gains on Tuesday. The EuroSTOXX 50 was on green ground throughout the entire trading day and finally closed 2.2 per cent higher at 3,331 units.

In the wake of friendly Wall Street, a surprisingly positive ZEW Index and positive economic data from China, the Dax 30 closed more than 2 per cent higher at 12,946 points. At times, it even climbed above the 13,000 mark for the first time since the end of July. Also, the TecDAX increased its initial gains and closed 1.8 per cent higher at 3,081 units.

While the balance sheet season continued to attract attention, investors are now also betting on an agreement regarding another US stimulus package. After US President Trump had decided on further corona aid at the weekend only by decree, the deadlocked negotiations between the parties are now moving again.

In the Forex market, the euro has finally weakened. The last hour before Wall Street closing, the common currency was trading at $1.1745. In Asian trading, it rose from a low of $1.1723 to $1.1808 in European trading.

Oil prices on Tuesday benefited from improved sentiment in the financial markets and rose. At the end of today’s trading day, a barrel of Brent crude was traded for 45.22 US dollars, 25 cents more than the previous day. The price of a barrel of West Texas Intermediate (WTI) US oil rose by 42 cents to 42.35 US dollars.

After the recent rally gold and silver are under heavy pressure on Tuesday. In the early evening, gold traded close to $1,900 per troy ounce – a minus of a good 5 per cent on the day. With this, the precious metal fell back to the old record from 2011, which had only recently been broken.

The cryptocurrency market followed traditional safe havens and posted losses today. Bitcoin and Ethereum both fell by 2.2 per cent to $11,400 and $382 respectively. XRP lost 4.4 per cent to $0.2840 while ChainLink was the only winner amongst the top 10 digital assets with a 7.1 per cent gain to $13.80.

Hopes for a rapid economic recovery in Germany have increased again, says the Mannheim Centre for European Economic Research (ZEW), citing its monthly survey. The barometer of expectations for the economic development in the next six months surprisingly rose in August to plus 71.5 points from 59.3 points in July and reached its highest level since the beginning of 2004. Economists had expected only 58 points for August.

Positive impulses also came from China – from the automobile market. On the world’s largest passenger car market, 16.4 per cent more cars were sold in July than in the previous year. This is the fourth consecutive increase. German car shares reacted with significant gains and led the Dax.

Since April, Facebook has removed more than seven million posts containing information about the coronavirus, which, according to the online network, could endanger people’s health.

Facebook has been taking a harder line on potentially dangerous information, such as alleged corona treatments, for some time. The company has also clashed with US President Donald Trump.

At the same time, the company admitted that the corona crisis made it more difficult to intervene in posts that indicate that users want to harm themselves. While automated software is used to detect hate speech, for example, the role of human auditors is still vital in these cases. The shift to the home office work has made their work more difficult.

The worsening of the Covid 19 pandemic in some of the markets it supplies has created additional demand for cookware supplier Hellofresh. Customers ordered more and more frequently. As a result, the company has now expanded its forecast for expected sales growth from previously 55 percent to 70 percent to now 75 percent to 95 percent The profit margin expected for this year has also been raised to nine to 11 percent, up from eight to ten percent previously.