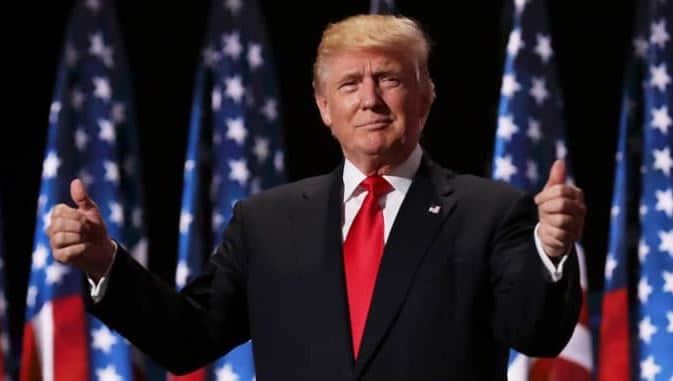 Another boost for the markets

In his planned speech on Tuesday evening, US President Donald Trump raised hopes for an agreement in the trade dispute with China. But then there was also a damper.

Concerning Europe, the powerful man in the White House was unyielding. In his eagerly awaited speech at the New York Business Club in the evening, US President Donald Trump lamented the European Union’s trade barriers. It was “very, very difficult” with the EU, Trump said. “The barriers they have are terrible, terrible. In many ways worse than China”.

Trump did not mention the threatened punitive tariffs on European cars. Before his speech, there had been speculation that the US president could again postpone the punitive tariffs by half a year. Trump’s government has been in cross-fire with the EU on trade issues for months. Brussels and Washington are negotiating a trade agreement. Trump wanted to decide on threatened higher tariffs on imports of cars from the EU by mid-November.

On the other hand, Trump signalled a rapprochement with China. A treaty could soon be concluded, he told the New York Business Club. The signing of a partial agreement is imminent. However, he would only agree to a treaty if it was good for the USA. If there was no agreement, US tariffs on China imports would be significantly increased. Neil Wilson, the chief analyst for online broker Markets.com, had previously warned against exaggerated expectations. “The president’s speeches resemble the throw of a darts arrow blindfolded.”

Although Trump’s communication supported the US markets, US investors did not really get out of cover even after the speech.

On the second trading day of the week, the Dow Jones moved around the zero line without any major fluctuations and closed almost unchanged at 27,691.86 points. The tech stocks performed somewhat more positively: The NASDAQ Composite said goodbye 0.26 per cent firmer at 8,486.09 points after the index had reached a new record high of 8,514.84 points. The S&P 500 also reached a new record high of 3,102.61 points in the course of trading.

The stock markets in Asia were friendly on Tuesday.

The EuroSTOXX 50 recorded a small increase to the sound of the starting bell. As the day progressed, it was able to climb more significantly to a new high for the year of 3,714.09 points. The index even reached a four-and-a-half-year high of 3,719 points at one point.

Next to the positive signals from Trump and the US markets, the balance sheet season continued to attract attention and created a good mood. Furthermore, favourable economic data boosted the buying mood of investors.

The euro exchange rate on Tuesday continued the losses of the previous week. After the common currency had stabilized the day before, it now slipped to 1.1003 US dollars, its lowest level since mid-October. Most recently, it was able to recover slightly from this with 1.1011 dollars. The European Central Bank (ECB) had meanwhile set the reference price at 1.1015 (Monday: 1.1041) dollars. Market observers spoke of a general dollar strength, which in turn had further burdened the euro.

Meanwhile, unexpectedly strong economic data from the Euro-Zone failed to boost the common currency. In November, the economic expectations of German financial experts had improved considerably. The indicator of the Centre for European Economic Research (ZEW) had risen by 20.7 points to minus 2.1 points and thus to its best value for about half a year.

Investors also continued to leave the safe harbours. Yields on the bond market, on the other hand, rose, with ten-year German bonds yielding minus 0.227 per cent. In September the yield was still at a record low of minus 0.743 per cent. The “crisis currency” gold is also becoming cheaper by the day. A troy ounce costs 1,452 dollars, 0.3 per cent less than the day before.

Nothing major occurred on the cryptocurrency market. Bitcoin is still sitting at approximately $8,800, while Ethereum is being traded at $186 and XRP just above $0.27.

Cannabis company Tilray presented its figures for the recent third quarter of 2019 on Tuesday after Wall Street closed. A loss of $0.36 per share was reported after a loss of $0.256 per share in the previous quarter. This was higher than expected, with analysts forecasting a loss per share of $0.265.

The Italian television group Mediaset increases its access to ProSiebenSat.1. The holding company led by the son of former Italian Prime Minister Silvio Berlusconi, Pier Silvio Berlusconi, increases its stake in the broadcasting group by ProSieben, Sat.1 and Kabel 1 from 9.6 per cent to 15.1 per cent. The subsidiary Mediaset Espana has secured a further 5.5 per cent. “ProSiebenSat.1 has considerable growth potential, and Mediaset is pleased to be able to strengthen its position as a major shareholder further,” the press release stated. The increase is a “milestone for Mediaset’s pan-European portfolio strategy”.

Trade with the Best Trading Platforms for Europeans Traders in 2019

The shareholders of Craft Brew should be bubbling with joy today: the share price of the Craft beer specialist jumps 122 per cent to 16.25 dollars. Major shareholder Anheuser-Busch wants to acquire Craft Brew for $16.50 per share or $321 million. So far, Anheuser-Busch owns 31.2 per cent of the company from Portland. In August, Anheuser-Busch had announced that it would not bid for the remaining shares.