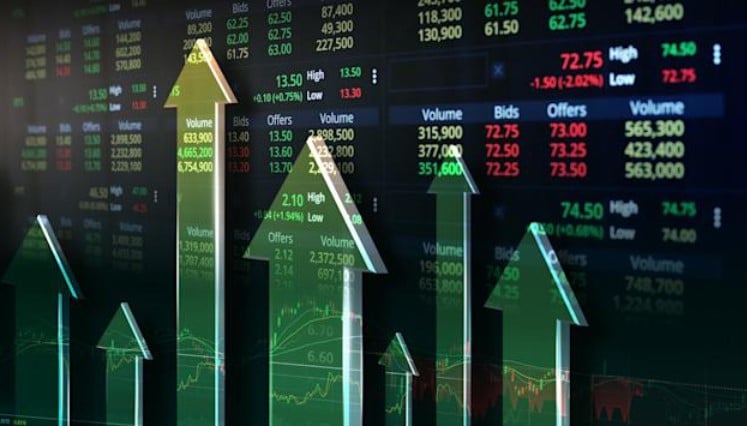 Shortly before the US reporting season’s kick-off, investors in the USA are digging in their heels. Both the Nasdaq technology exchange and the broad-based S&P 500 index rose on Tuesday and set new records. Only the leading Dow Jones index was unable to keep up, mainly due to index heavyweight Johnson & Johnson’s weak daily performance.

The big banks JPMorgan Chase and Goldman Sachs, among others, will present their business figures on Wednesday. Investors will be watching closely to see whether the companies’ figures and outlooks justify the high valuations on the stock market.

Even though the figures are traditionally published earlier in the USA than in Europe, the events will also significantly impact the European and other international markets. However, hardly any investors have the recent escalation of the conflict between Russia and Ukraine on their minds at the moment. Geostrategic risks are always unpredictable and can cause volatile price movements very quickly. The USA and NATO have currently pledged support to Ukraine because of the extensive Russian troop deployment on the country’s border. However, this evening, President Joe Biden proposed to Russian President Putin a summit meeting in a neutral third country to discuss mutual problems between the two countries.

In the USA, the indices developed unevenly on Tuesday.

The Dow Jones was in the red in the course of trading and closed at 33,679.44 points, down 0.20 per cent. Meanwhile, the tech stocks index NASDAQ Composite gained 1.05 per cent to 13,996.10 index points. Meanwhile, the NASDAQ 100 selection index reached a new record high. The broad market S&P 500 index, which includes both standard and technology stocks, also rose, albeit at a more moderate 0.3 per cent to 4141 points. However, it also marked a record high at 4148 points.

The US authorities have recommended some vaccination stops due to some cases of sinus vein thrombosis after vaccination with Johnson & Johnson’s vaccine, which is likely to set back the USA’s vaccination campaign somewhat and accordingly depressed investor sentiment. On the other hand, the all-clear came from US consumer prices in March. These were able to rise above expectations. Core inflation remained moderate, which is why market observers believe that inflation concerns should not increase for the time being. The monetary authorities will not feel pressured to withdraw the expansionary monetary policy.

The biggest stock exchanges in the Far East were also mostly able to gain on Tuesday. The Japanese benchmark index Nikkei closed with a gain of 0.72 per cent at 29,751.61 points. On the Chinese mainland, the Shanghai Composite index lost 0.48 per cent to 3,396.47 points, while the Hang Seng climbed a marginal 0.15 per cent to 28,497.25 index points on Hong Kong’s stock exchange.

After the slight setback of the previous day, the Asian stock markets stabilised somewhat. In Shanghai, however, a surprisingly low trade surplus combined with fears of tighter monetary policy put the brakes on.

The European stock exchanges rose slightly but were not yet able to benefit from overseas positive impulses. The EuroSTOXX 50 continued its consolidation phase and said goodbye 0.19 per cent firmer at 3,969.59 points.

The German stock markets also gained slightly. The DAX left the trading day with an increase of 0.13 per cent to 15,234.36 points. The TecDAX also rose, more significantly than its big brother, by 0.96 per cent to 3,487.03 points.

Investors held back given the current record level and the upcoming reporting season on the first quarter. This is also because potentially important economic and inflation data are due later in the week, including China’s growth data.

On the foreign exchange market, the greenback is currently weakened, not least by the Fed’s wait-and-see attitude, although the central bank’s inflation target of two per cent has been exceeded for the first time since February 2020. In this environment, the euro rose to 1.1949 US dollars in a volatile trading session after the US inflation data release.

Oil prices rose following data on Chinese foreign trade. This showed robust growth in March, giving a solid boost to the world’s second-largest economy. China is one of the world’s major oil importers. With an increase of 37 cents on the day, a barrel of Brent crude traded at 63.66 US dollars. US West Texas Intermediate (WTI) rose 33 cents to 60.03 dollars.

After dipping towards $1,723 per troy ounce, the gold price took a sharp u-turn in the evening and closed the session at $1,745.

Prior to the Coinbase IPO tomorrow, cryptocurrencies added yet another $15 billion to their overall market capitalisation to now 2.21 trillion US dollars. With this, the digital assets space is strengthening its position as an individual asset class more and more. Bitcoin gained 4.9 per cent to $63,300, while Ethereum rose 6.3 per cent to $2,293. XRP exploded again and shot up another 24.4 per cent to now $1.80, and its “little brother” Stellar Lumens gained 13.7 per cent to $0.67. Other cryptocurrencies, such as Cardano (ADA), Polkadot, Litecoin, ChainLink, Bitcoin Cash and even Dogecoin, posted large daily gains as well.

The US budget deficit rose to a record $1.7 trillion in the first half of the fiscal year. It was $660 billion in March alone, 454 per cent greater than in March of the previous year. The third round of stimulus caused federal spending to soar last month. Revenue rose 13 per cent to $268 billion in March, while spending jumped 161 per cent to $927 billion – the third-highest total ever recorded, after June and April last year. Higher government spending has provided the economy with some cushion against the devastation caused by the corona crisis. Still, it has also pushed up government debt relative to the economy to levels not seen since the end of World War II. Lower corporate tax revenues have contributed to the budget deficit.

Inflationary pressure at the wholesale level in Germany doubled in March for the second month in a row. According to the Federal Statistical Office (Destatis), wholesale prices rose by 1.7 per cent compared to the previous month and were 4.4 per cent above the same month’s level last year. In February, annual inflation had still been 2.3 per cent and in January 0.0 per cent. The strongest contribution to inflation in March was made by petroleum products (plus 13.7 per cent).

According to the ZEW, the index of economic expectations fell to plus 70.7 points. This was the first decline since November 2020, whereas economists surveyed by Dow Jones Newswires had expected an increase to plus 79.5 points. The index assessing the economic situation rose to minus 48.8 points. Economists had expected a rise to minus 52.0 points.

China’s foreign trade is experiencing robust growth, further boosting the second-largest economy. In March, exports, calculated in US dollars, increased by 30.6 per cent compared to the same period last year, as Customs reported in Beijing on Tuesday. Imports grew by an unexpectedly strong 38.1 per cent. Stronger global demand and the low basis for comparison last year after the sharp economic slump at the beginning of the corona crisis in China were responsible for the strong growth rates.