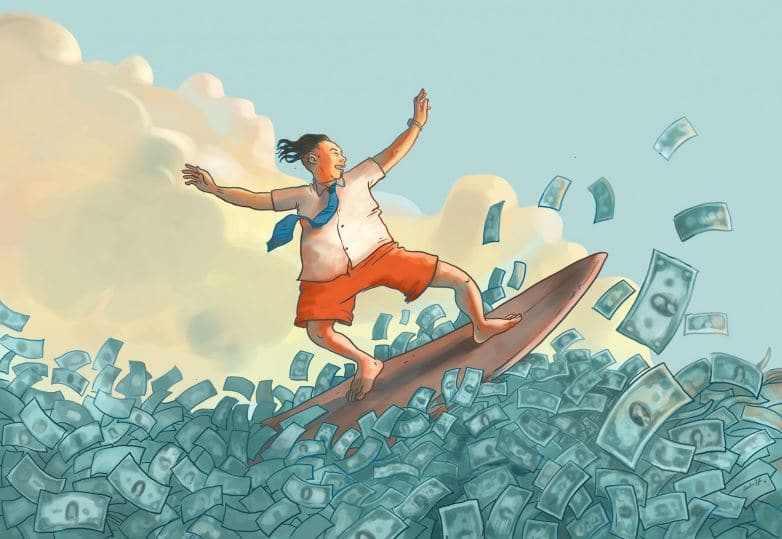 From Fantasy into Reality

The financial markets are a peculiar thing. After a quiet Easter weekend and an equally uneventful start to the week on Easter Monday, the markets got moving again today.

Among investors, hope has been raised that the global corona pandemic may have passed its peak in many places. Positive trading data from China also gave some encouragement to market participants. In addition, the balance sheet season is beginning slowly with the presentation of figures by heavyweights such as JPMorgan, Wells Fargo or Johnson and Johnson.

Although all experts agree that there is still a long way to go before the crisis returns to pre-crisis normality, the politicians are already discussing a gradual lifting of restrictions, which immediately sparked the imagination of the stock market. In Spain, Italy and Germany, the number of new infections is supposedly on the retreat. However, the pandemic has not yet been overcome, and experts are already warning against premature optimism and wrong decisions.

The contact restrictions in the fight against the virus crisis cost the US economy around 25 billion dollars a day in lost economic output, according to James Bullard, the head of the St. Louis Federal Reserve District. Nevertheless, there was another fireworks display on the US stock markets today. Investors thus seem to be looking very hopeful and far behind the crisis.

The Dow Jones gained 2.40 per cent in Tuesday trading to 23,951.20 points, and in the meantime, the US leading index had even jumped above the 24,000 point mark. The technology-oriented selection index NASDAQ Composite, which had already presented itself in a friendly light the previous day, rose by 3.95 per cent to 8,515.74 points.

Surprisingly positive Chinese export data have created a good mood on the Asian stock exchanges at the start of the week. The recent recovery thus continued.

The European stock exchanges also posted gains on Tuesday. The EuroSTOXX 50 started the day with a plus and ended the day 0.86 per cent stronger at 2,917.74 index units.

Early trading saw technical disruptions at Deutsche Börse, which affected XETRA trading until around midday. Since the early afternoon, however, trading then resumed as usual, and investors pushed prices higher.

The euro exchange rate was able to gain ground today. The common currency was last traded in US business at USD 1.0975. Market observers pointed to a generally friendly mood in the financial markets, which has also given the euro a boost, while the current US dollar weakness continues. The European Central Bank has set the reference rate at 1.0963 (Thursday last week: 1.0867) dollars.

Oil prices remained under considerable pressure on Tuesday despite the Opec cartel’s decision to cut back oil production. The members of the Opec oil cartel and other partners such as Russia recently agreed to produce a total of 9.7 million barrels less per day in May and June. Thereafter, production is to be adjusted to the collapse in demand due to the corona crisis.

The extent to which this agreement represents a definitive end to the price war remains to be seen, according to Commerzbank commodities expert Eugen Weinberg. In a commentary, he referred not only to the difficulty of implementing past Opec cuts but also to the lack of control and penalty mechanisms.

Meanwhile, gold is continuing to soar in the wake of the crisis even after the Easter holidays. Up to $1,746 was paid today for the troy ounce – the highest price since the end of 2012. Gold is currently trading at $1,737.

Cryptocurrencies are currently in standby mode, and no bigger movements in the top tier digital assets occurred since last week. A Bitcoin costs $6,800, Ethereum $158 and XRP $0.1860.

IMF forecast for the development of the global economy

The IMF today issued a severe warning about the consequences of the epidemic and predicted a severe global recession that would be sharper than the financial crisis of 2008/2009. Among others, the IMF expects economic output to fall by 7.0 per cent in Germany in 2010 and by 7.5 per cent in the eurozone as a whole.

Amazon shares reached a record high on Tuesday. Most recently, the increase was 5.28 per cent, making it worth $2,283.32.

The shares of the online giant are among the big winners on the stock market in the current virus crisis. Because many shops around the world have to stay closed due to the pandemic, people are making even more purchases over the Internet. Amazon is broadly positioned in online trading, i.e. it does not specialise in individual product categories. This also helped the papers.

Starting from their low of 1,626 dollars in mid-March, marked by the global stock market crash, which was the lowest price since March 2019, Amazon shares have now gained 38 per cent.

The Corona crisis has caused a slump in profits for the major US bank Wells Fargo. Due to heavy burdens from bad loans and write-offs on securities, first-quarter earnings shrank to 653 million dollars from 5.9 billion dollars a year ago, the San Francisco-based institute Wells Fargo announced on Tuesday. This means that the drop in profits was even more severe than that of rival JPMorgan. Provisions for bad loans shot up by $3.2 billion to $4 billion. Another $950 million was due to write-downs on securities. Group revenues shrank by 18 per cent to 17.7 billion dollars.