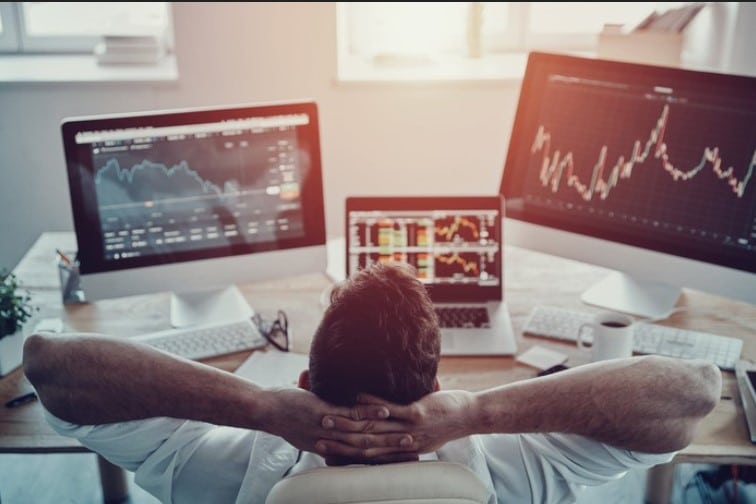 The belief in the tremendous economic upswing after the pandemic currently overrides all worries, fears and antithesis. Investors are jumping at the chance and driving the markets to dizzying heights. But is this all a grand illusion? A delusion that everything is better than it really is?

Neither new corona waves and lockdowns nor the current vaccination chaos are stopping investors in their belief in a better post-corona era. The stock market bulls were also encouraged today by solid corporate data, such as carmaker Volkswagen, whose shares rose strongly and led the DAX in this country.

However, some market strategists warn that whether the party on the stock market will continue in the short term will depend above all on tomorrow’s Fed meeting. However, it is unlikely that Fed Chairman Jerome Powell will cast doubt on the current status quo with his comments.

The US stock markets were mixed in Tuesday’s trading session but still tended to be friendly. The Dow Jones started the session almost unmoved at 32,966.75 points and fell slightly in the course. In the end, the US leading index left with a loss of 0.39 per cent at 32,824.90 points. Meanwhile, the NASDAQ Composite closed with a plus of 0.09 per cent at 13,471.57 index units. Thanks to the unchanged positive sentiment on the markets, investors continued to buy technology stocks, which are sensitive to the economy, and the broad S&P 500 even reached a high of 3,981.04 points.

Economic data on Tuesday again dominated the US markets. The pre-market US retail sales figures for February, which fell much more sharply than expected, were somewhat disappointing. However, the January figure was revised sharply upwards. The data should confirm the US Federal Reserve in its current course of continued support for the economy, they say. Consumer spending is expected to rise at the latest when the pandemic subsides, and more money flows from the US aid package.

Meanwhile, the markets are looking with increasing excitement to the interest rate meeting of the US Federal Reserve, the results of which will be announced tomorrow evening. Investor caution in the run-up to this important date for the stock market is very common.

After new records on Wall Street, markets in Asia were also more robust on Tuesday. The fact that US bond yields had trended lower the previous day caused premiums, especially in the technology sector. The slowing momentum of the Corona pandemic, which should allow for further easing in the economy, also improved investors’ mood.

Confidence continued to spread on the European trading floors today. The EuroSTOXX 50 was up 0.56 per cent and closed accordingly at 3,851.13 points.

After last week’s record chase, profit-taking had depressed the DAX at the beginning of the week. The suspension of AstraZeneca’s COVID-19 vaccine also caused uncertainty. On Tuesday, however, the German benchmark index was able to regain the 14,500 marks. The DAX finally exited trading 0.66 per cent higher at 14,557.58 points. Also, the TecDAX recorded gains and closed with a plus of 1.13 per cent at 3,386.27 points.

While the problematic issue of rising interest rates eased, economic confidence continued to dominate. Market participants are already looking ahead to the Fed meeting on Wednesday.

The focus was also on the ZEW index on the economic expectations of stock market participants in Germany.

A high level of uncertainty weighs down the foreign exchange market. According to traders, the suspension of AstraZeneca vaccinations in Germany and other key eurozone countries weighed on the single currency. Accordingly, the euro has remained under pressure in US business and was last quoted at 1.1905 US dollars.

Oil prices have come under some pressure in the face of rising demand concerns. In recent months, oil prices have recovered significantly from their sharp drop in the first Corona wave about a year ago. Recently, however, the momentum has slackened somewhat. In addition to demand concerns, experts point out that oil production is becoming more profitable for US shale oil producers as prices rise. Brent oil fell by54 cents a barrel to 68.34 US dollars. The price for a barrel of American West Texas Intermediate (WTI) crude oil fell by 73 cents to 64.66 US dollars.

Gold continued trading in a narrow range and only went up briefly to as high as $1,741. The precious metal’s closing price was almost unchanged from the opening price at $1,732 per troy ounce.

The cryptocurrency market moved up higher after a brief pause on Monday, with Bitcoin (BTC) gaining 3 per cent to $56,500. Major news that Cardano (ADA) will soon be listed on Coinbase Pro lifted the fourth-largest digital asset by market capitalisation by 20 per cent to now $1.22. Also, Ethereum increased by 1.6 per cent to $1,781, while XRP gained 6.2 per cent to $0.4620.

The economic expectations for Germany of financial analysts and institutional investors recovered more strongly than expected in March.

Economic expectations for the eurozone also improved in March. The corresponding indicator rose by 4.4 points compared with the previous month to 74.0. The indicator for the eurozone’s current economic situation increased by 4.8 points to minus 69.8.

Import prices in the United States rose more than expected in February. According to the US Department of Labour, import prices rose 1.3 per cent month-on-month after a 1.4 per cent increase in January. Economists surveyed by Dow Jones Newswires had forecast a consensus increase of 1.0 per cent. The development of import prices is an indication of inflation in the USA.

US shoppers held back sharply on retail spending in February, but sales are expected to strengthen as the pandemic subsides and more stimulus money is distributed. Total US retail sales fell 3.0 per cent from the previous month. Economists had expected a consensus decline of only 0.4 per cent. The retail data is considered an essential indicator of US consumer spending, which plays a vital role in the US economy, accounting for about 70 per cent of gross domestic product.