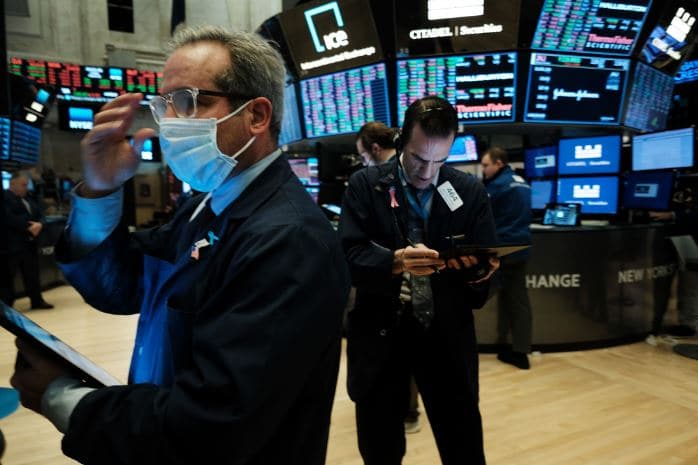 Optimists and pessimists once again fought a fierce battle in the market today and caused several changes of direction for many financial instruments. The focus on the Forex market was primarily on the euro and the precious metal gold, next to the US stock indices that reached new all-time-highs.

Many market analysts doubt that this record-hunt can continue since the markets are mainly pushed upward by only a handful of companies – mostly the tech giants. Today it was also Walmart who provided a substantial boost after presenting eye-watering growth numbers – especially in their online business.

On Wall Street, the stock indices took different directions. The Dow Jones had started marginally stronger and then slipped. As a result, the closing bell sounded for a discount of 0.24 per cent at 27,778.07 points on the price board. In contrast, the NASDAQ Composite technology index continued to rise after a friendly start. It temporarily reached a new all-time high of 11,230.61 points, mainly due to soaring Tesla and Amazon share prices. In the end, it closed 0.73 per cent up at 11,210.84 points. The market wider S&P 500 index also climbed to a new record-high at 3,395 points but fell back slightly afterwards.

The fact that new corona infections in the USA fell to their lowest level since the end of June was received positively. In addition, the negotiations on a new corona aid package could get moving again, as the Republicans apparently want to present a slimmed-down program draft in the Senate with funds for the US Postal Service.

However, the conflict between China and the USA had a dampening effect on stock market sentiment. The conflict was intensified by new US regulations directed against Huawei.

Investors in Asia’s major stock markets held back on Tuesday. The CSI 300, which comprises the 300 most valuable stocks in mainland China, rose 0.1%, while the Hang Seng in Hong Kong fell 0.1%. In Japan, the leading index Nikkei 225, closed 0.3 per cent lower at 23,040 points.

New record highs for several US-American indices did not stimulate the stock markets in the Far East. Investors are cautious about the minutes of the latest Fed meeting, which will be published in the evening. Besides, President Trump has now apparently cancelled the planned talks with China on the trade agreement until further notice.

Europe’s markets were looking for direction in today’s sessions. The EuroSTOXX 50 lost 0.14 per cent to 3,301.36 points at the opening and then oscillated between gains and losses – in the end, it was still 0.49 per cent lower at 3,289.64 index units.

The German stock market also went up and down on Tuesday: first, the Dax 30 plummeted, then it jumped above the 13,000 point mark, before drifting off again in the afternoon. The leading German index closed 0.3 per cent lower at 12,881 points. This means that the gains from the beginning of the week have been lost again.

On the foreign exchange market, the euro exchange rate rose to its highest level since May 2018. In European afternoon trading, the euro climbed to a peak of 1.1966 US dollars, and most recently it returned somewhat to $1.1936. The US dollar once again fell against all major currencies on Tuesday. Experts cite several reasons for the weakness, including the now also very low interest rates in the US, the political dispute over new corona aid in Washington, and the ongoing tensions between the US and China. Added to this is the uncertainty in the run-up to the US presidential election, which is scheduled for November.

Gold continues on its recovery path. Up to $2,010 was paid for a troy ounce on Tuesday – almost 1 per cent more than yesterday. At the beginning of August, the price had reached a record high of $2,075 but had fallen back significantly after that. Silver also continued to rise again today.

Digital assets took a hit today and consolidated after raking in recent gains. Bitcoin lost 3.9 per cent to 11,780, while Ethereum fell over 4 per cent to $410. XRP and ChainLink, which had both gained significantly in the last week, fell even sharper with 7.1 and 9.3 per cent to $0.2930 and $15.65 respectively.

The Swiss Lufthansa subsidiaries Swiss and Edelweiss receive their state-guaranteed loans. The German Economic Stabilization Fund (WSF) has approved the Swiss federal guarantees for loans amounting to 1.5 billion francs (1.4 billion euros), Swiss announced on Monday. The government in Bern had already promised the guarantee in May. However, Swiss state aid was dependent on the German rescue package for Lufthansa. Negotiations had dragged on.

After a weaker start, Lufthansa shares turned positive in Tuesday trading. In XETRA trading, the shares ultimately gained 1.06 per cent to 8.39 euros.

Passenger numbers at Frankfurt Airport have not been able to continue their recovery from the corona low. From August 10 to 16, the airport operator Fraport counted 353,289 passengers at Germany’s largest airport, 77.3 per cent fewer than in the corresponding calendar week in mid-August one year earlier.

The number of aircraft movements now fell by 61.3 per cent to 4,029 takeoffs and landings compared with the corresponding calendar week in the previous year. The volume of cargo and airmail fell by 13.7 per cent to 32,588 tonnes, following a year-on-year decline of 11.0 per cent in the previous week.

Nestlé strengthens its position in the field of medical nutrition. The Swiss food giant acquires the American IM HealthScience (IMH). The privately-owned Florida-based company, founded in 2013, sells products designed to help treat digestive and sleep problems. IMH is growing several times faster than the market. Currently, the company’s IBgard, FDgard, Fiber Choice and REMfresh products are available online and at retailers in the USA and Canada.

The US retail giant’s figures for the second quarter of the current year are impressive. The company increased its revenues by around 6 per cent to 137 billion dollars compared to the same period last year. The bottom line for Walmart was $6.5 billion in the quarter – a hefty 79 per cent increase. Adjusted earnings per share amounted to $1.56. Experts had expected considerably less, averaging $1.24 per share.