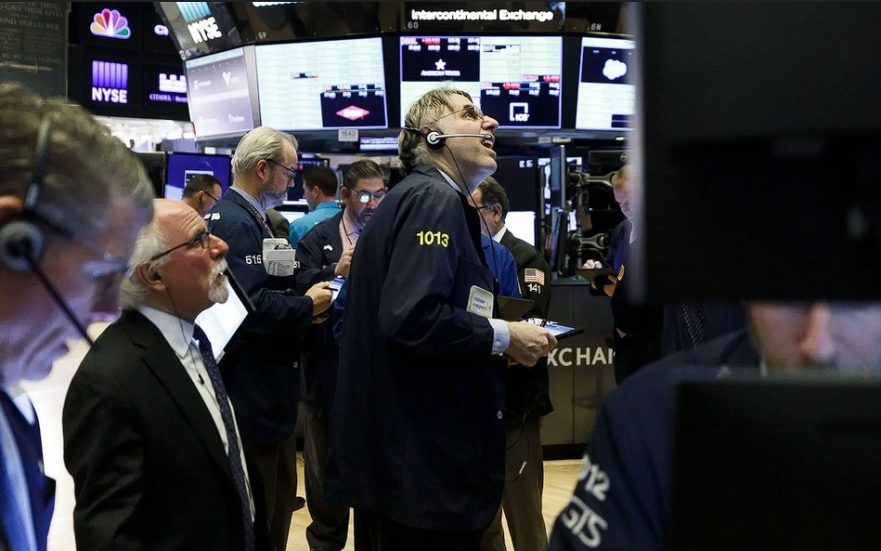 Once again, the stock market world was divided today. While on the one hand, corona news is warning the markets to be cautious, the hopes for a new trillion-dollar aid package in the USA are arousing the buying mood of investors.

So far, there has been no tailwind from the start of the reporting season, which offered light and shadow.

The US stock markets gained ground today. The Dow Jones ended the second trading day of the week with a plus of 0.40 per cent at 28,308.49 points. The technology-heavy NASDAQ Composite index managed to increase by 0.33 per cent to 11,516.49 points.

The US stock markets thus recovered on Tuesday from their losses of the previous day. Investors are still looking towards the negotiations on the economic stimulus package. On Tuesday it was supposed to be decided whether this will be launched before the US presidential elections on November 3 or only afterwards. Still, no decision was made until the end of trading.

Meanwhile, US President Donald Trump told TV station Fox News concerning the stimulus package that he would also approve sums above the $2.2 trillion demanded by the Democrats: “I want to make it even bigger than the Democrats”.

Once again, the stock markets in the Far East developed in different directions. The Japanese leading index Nikkei fell by 0.44 per cent to 23,567.04 points by the end of trading.

On the Chinese mainland, the Shanghai Composite turned positive in the course of trading and closed 0.47 per cent stronger at 3,328.10 units. In Hong Kong, the Hang Seng closed 0.11 per cent higher at 24,569.54 points.

Experts saw a wait-and-see attitude among Asian investors in the run-up to the US elections. The decision of the Chinese central bank to leave the one- and five-year loan prime rates unchanged was expected by the market but nevertheless boosted confidence in China.

Despite the recovery on the US stock markets, stock market prices in Europe fell due to the worsening coronal situation. The EuroSTOXX 50 opened with little movement, but then slipped more clearly into the red. It went down 0.45 per cent more easily at 3,227.87 points.

The Frankfurt Stock Exchange also tended to go downhill today. The Dax 30 gave way somewhat at the opening of the stock exchange and fell deeper into the loss zone in the day. It ended trading at 12,736.95 points, down 0.92 per cent. The TecDAX also extended its initial losses in the course of the day. In the end, it lost 1.35 per cent to 3,109.40 points.

The further increase in the number of corona cases is fuelling uncertainty and the fear of a renewed lockdown. Besides, investors turned their attention to the USA and the question of whether an agreement on a new economic stimulus package can be reached there today.

In the Forex market, the Euro has largely defended its daily gains in US trading. Most recently the common currency was quoted at 1.1830 US dollars. In early European trading, it was traded at around 1.1760 US dollars.

Oil prices have fallen slightly in the course of the year. Higher production volumes in Iran, the USA and Libya in particular put pressure on prices. The price of a barrel Brent oil fell by 16 cents and most recently cost 42.46 US dollars. The barrel price of West Texas Intermediate (WTI) fell by 17 cents to 40.66 dollars.

The price of gold, however, rose again. The troy ounce of gold costs $1,912 in the evening.

Regarding the producer price indices in Germany, price pressure at the producer level is continuing to ease. According to the Federal Statistics Office, producer prices fell by 1 per cent in September compared with the same month last year. In August, the decline in prices had still amounted to 1.2 per cent. Analysts had expected a rate of minus 1.4 per cent for September. Energy prices were once again responsible for the general decline in prices.

In the fierce dispute over the planned Brexit Trade Pact, Great Britain and the European Union insist on movement from the other side. Yesterday, the British Minister of State Michael Gove once again called on the EU to “fundamentally” change its position on the agreement. As things stand at present, however, he said that such an agreement could no longer be expected before the end of the Brexit transition phase. Brussels had refused to accelerate the negotiations and demanded compromises from the British side.

British Prime Minister Boris Johnson had accused the EU of not wanting a trade pact with Great Britain, which is why it is now assumed that there will be a break without a treaty at the turn of the year.

During the corona crisis, the US consumer goods group is profiting from the high demand for paper towels and cleaning agents. The Board of Management has, therefore raised its sales and profit forecast for financial year 2020/21. It now expects sales growth of 3 to 4 per cent instead of 1 to 3 per cent. Earnings per share are expected to increase by 5 to 8 per cent instead of 3 to 7 per cent. In the first quarter just ended (as of September 30), the company recorded an increase in sales to 19.32 billion dollars.

Lufthansa: billion-euro loss in the summer as well

In the typically lucrative summer season, Lufthansa has suffered a further billion-euro loss.

The Corona pandemic meant that numerous flights continued to be cancelled, while the company also had to refund 2.0 billion euros to customers for trips previously cancelled. However, liquidity is still assured, the state-supported group confirmed in a mandatory announcement to the stock exchange in Frankfurt on Tuesday.

According to provisional figures, the adjusted loss before interest and taxes in the third quarter amounted to EUR 1.26 billion – compared with EUR 1.7 billion in the spring quarter. This means that the operating loss for the year as a whole has already reached almost EUR 4.2 billion. At the end of September last year, Lufthansa had posted a gross profit of 1.72 billion euros. Within the space of a year, net debt increased by more than 2.2 billion euros to 8.93 billion euros. The stock market initially reacted with Lufthansa shares rising. After a plunge to 7.95 euros, they rose by 2.88 per cent to 8.22 euros.