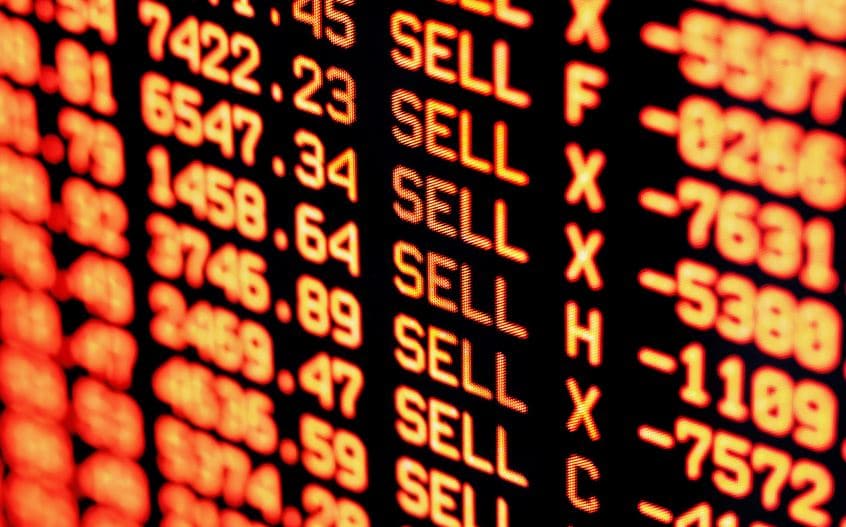 “Sell everything!” is back on

After the historic collapse of the oil price the day before, today, the global financial markets consequently took a hit, and heavy losses were hailing. But not only equities were sold off fast and furious once again but also commodities and typical safe havens such as gold with the US Dollar being the ultimate benefactor.

The markets witnessed yet another flash crash of oil prices, mainly WTI dropping from approximately $23 to $11.50, in just minutes. The recovery rally in the markets thus came to an abrupt end, and the collapse of oil prices continues to pull the stock markets down profoundly.

The US leading index Dow Jones 30 Industrial dropped by 2.67 per cent to 23,019.71 points in Tuesday trading, after having already lost 2.4 per cent the day before. The technology-oriented selection index NASDAQ Composite lost 3.48 per cent to 8,263.23 points. In the past two weeks, which were marked by partly significant gains, the US stock markets were able to recover noticeably from the virus-related crash.

The losses of the previous day thus continued on Wall Street on Tuesday. The oil price slump, which is becoming more and more apparent as the extent of the global recession becomes ever more apparent, continued to weigh on the markets. The American oil grade WTI was clearly in the red on the previous day. In addition, the corona pandemic and its spread remain in the focus of investors.

Concerns about a weakening of the US oil economy and its possible consequences also for the banking sector weighed on Asian stock markets on Tuesday. Added to this was the fear of political uncertainty in North Korea following reports that North Korean ruler Kim Jong Un is in critical condition after an operation. In the worst case, a power struggle in the country could loom. The South Korean Kospi Index has dropped nearly one and a half per cent.

The European stock markets also plummeted on Tuesday. The EuroSTOXX 50 already gave way at the start of trading and had to accept even more significant losses in the day. It closed with a substantial loss of 4.06 per cent at 2,791.34 index units. The French Cac 40 suffered similar losses, while the British FTSE 100 fell by three per cent.

After three consecutive winning days, the Dax fell by 4 per cent to below 10,300 points. In the end, the DAX was down 3.99 per cent to 10,249.85 points. The TecDAX showed a small minus at the start. In the day, the German tech stocks then moved significantly deeper into the loss zone. The TecDAX ended trading with a significant minus of 2.56 per cent at 2,832.10 points.

The euro did not make much movement in the Asian, European, or US trading sessions on Tuesday. About an hour before the close of trading on Wall Street, the common currency cost 1.0851 US dollars. The European Central Bank set the euro reference rate in Frankfurt at 1.0837 (Monday: 1.0860) dollars.

After the price of US crude oil fell below the zero mark for prompt delivery on Monday for the first time, the turbulence spread to other market segments on Tuesday. Not only did the price of American crude oil fall sharply, but the price of European crude oil was also pulled down. The American West Texas Intermediate (WTI) grade for delivery in June cost $11.59 at a low on Tuesday. In the evening, the price then stood at USD 13.74, still USD 7.68 less than the previous day. North Sea Brent was not spared the turbulence on the US oil market. It was also caught in the downward spiral on Tuesday. At its low, it cost 18.10 dollars. Most recently, the price stood at 19.60 dollars. That was $6.53 less than the previous day.

After the market switched back from risk-on to risk-off, the price of gold was increasingly affected by the “sell everything” mode and couldn’t hold its status as a safe haven. The price temporarily dropped as low as $1,661 but was able to recover to $1,688 at the end of trading.

Cryptocurrencies also felt the pressure but didn’t suffer as much as other asset classes during the broad sell-off. Bitcoin lost 0.4 per cent to $6,850, while Ethereum lost over 0.6 per cent to $171 and XRP decreased in value by 0.4 per cent to $0.1830.

Fewer and fewer passengers at Fraport

At Frankfurt Airport, the slump in passenger and cargo figures continued to worsen after the Easter weekend as a result of the corona crisis. From April 13 to 19, the airport operator Fraport counted 37,015 passengers at Germany’s largest airport, 97.3 per cent fewer than in the same calendar week the year before. In the week up to Easter Sunday, the decline had already reached 96.8 per cent.

The tobacco giant’s shares are traded in the USA at the opening of the stock exchange, around 5 per cent lower than in the previous year. Investors are thus reacting above all to statements by the Group on the future. For the year as a whole, “negative charges” are expected, it was said. Philip Morris was still able to deliver impressive figures in the first quarter. Sales amounted to 7.15 billion dollars. The company also surprised with positive results: Philip Morris earned 1.21 dollars per share in the quarter.