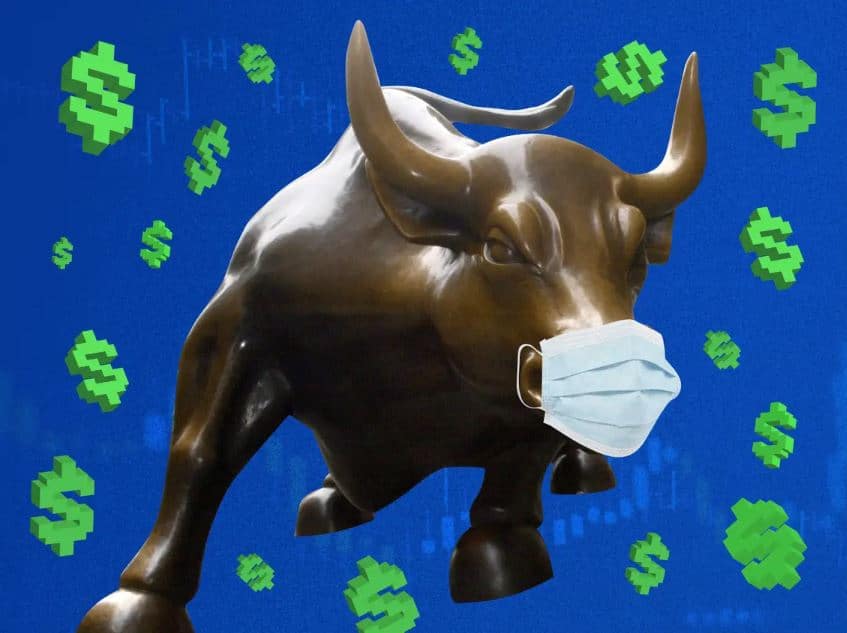 It was a colossal stock markets party in the last 24 hours with many markets and financial instruments soaring to new heights. The positive outcome of the EU money summit has been expected and appreciated by the stock market. The course has been set, and a new flood of fresh money is guaranteed.

Nevertheless, tomorrow, everyday life will begin again. The euphoria could then be followed by disillusionment, and it would not be the first time. A taste of back to reality was already seen in late US trading today, where markets started consolidating.

The US stock markets were split in two on Tuesday.

The Dow Jones ended trading 0.60 per cent higher at 26,840.40 points after it had travelled even higher. The NASDAQ Composite, on the other hand, which previously soared suffered a 0.81 per cent drop to 10,680.36 points at the closing bell.

Hopes for an economic recovery boosted the “old economy” stocks in particular today. The agreement on an economic stimulus package worth billions of euros during the EU summit also helped to increase the good mood. Nevertheless, the continuing high infection figures in the USA remained a drop of bitterness. Headwind also came from statements by Republican Senator McConnel, who does not believe in a quick new stimulus package. The reporting season also picked up speed again. IBM and Coca-Cola, among others, presented figures.

Asian stock markets rose on Tuesday in the wake of a predominantly strong Wall Street. Hopes for progress on corona vaccines and the EU’s agreement on billion-dollar stimulus packages also provided a boost.

Europe’s markets were still in high spirits today, celebrating the 1.8 billion euro financial package that was finally passed at the 4-day EU summit. The EuroSTOXX 50 was able to hold on to gains of 0.5 per cent at 3,405.35 index units.

The Dax 30 has continued its recent upswing and on Tuesday was above the 13,000 mark. At the end of a buoyant trading day, the leading German index advanced by just under one per cent, closing below its daily high at 13,171 index units. The index had already peaked at over 13,300 points but then failed to maintain this level. The TecDAXwas not able to hold its gains, having started with a plus of 0.47 per cent at 3,167.18 points. In late trading, it fell into the red and closed 0.5 per cent weaker at 3,136.59 points.

Following the agreement of EU heads of state and government on a corona reconstruction fund, the US dollar continues to come under pressure on the currency market. The euro rose to its highest level since the beginning of 2019 on Tuesday, with the single currency closing at $1.1532. Another big winner that continued its rally against the greenback is the Australian dollar (Aussie). After breaking the psychologically important $0.70 barrier, it’s travelling fast towards $0.72, currently sitting at $0.7130.

Oil prices rose on Tuesday. The generally more confident mood on the financial markets also supported the commodity market. Most recently, a barrel of Brent crude costs $44.64, a gain of $1.34. The price of a barrel of the American variety West Texas Intermediate (WTI) rose by $1.30 to $42.11.

Gold and silver are also still on a steep climb. The price of the ounce of gold rose to $1,843, while silver is trading at $21.16. Experts expect further increases for the two precious metals, not least because of the enormous amounts of money in circulation.

Trade with the Best Forex Brokers that accept PayPal

IBM has to make significant cutbacks in the corona crisis but is doing much better than expected thanks to a flourishing cloud business. Investors are pleased – the share price has risen significantly in post-trading.

In the second quarter, turnover fell by 5.4 per cent year-on-year to 18.1 billion dollars, IBM announced on Monday after the US stock market closed. The net profit collapsed by 46 per cent to 1.4 billion US dollars. Despite the sharp losses, the computer primitive exceeded the forecast of Wall Street analysts.

This was mainly due to strong growth in the lucrative cloud segment with IT services and storage space on the Internet. Here, revenues increased by almost 30 per cent. IBM has long been weakening in its traditional core hardware business with servers and mainframes but is nevertheless recording strong growth in new business areas such as cloud services, data analysis and artificial intelligence.

IBM’s share price initially reacted in the after-market, with a 6.3 per cent increase to 134.24 US dollars. The stock thus jumped back to a new post-corona high.

The US beverage producer Coca-Cola felt the effects of the corona pandemic in the second quarter. In the three months to the end of June net profits plummeted by almost a third to 1.8 billion dollars (‘1.6 billion) compared with the same period last year, according to a statement by its Pepsi rival in Atlanta, Georgia, on Tuesday. Sales decreased by 28 per cent to 7.2 billion dollars.

Demand fell sharply, especially from commercial customers such as restaurant chains, which had to close branches due to the pandemic. Despite the renewed corona escalation in the USA, CEO James Quincey believes that the company has the worst behind it. “We believe the second quarter will prove to be the most challenging quarter of the year.”

The provision for credit losses caused a drop in profits at the Swiss bank UBS in the second quarter of 2020 by eleven per cent to $1.23 billion. Analysts had expected $973 million. Credit loss expense rose to $272 million from $268 million in the first quarter and $12 million in the same period last year. Investment banking flourished as clients traded more securities in the face of stock market turbulence.