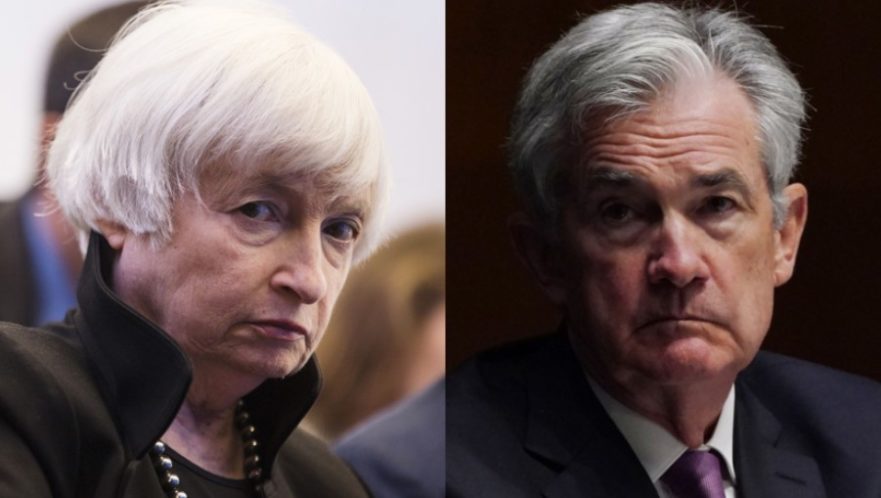 Interesting was Yellen’s statements on the planned additional economic stimulus of three trillion dollars. The Treasury secretary conceded that the long-term infrastructure programmes would probably be accompanied by “some revenue increases” to finance them. They should be used to create “good jobs” and improve the competitiveness of the economy. “Fair changes to the tax system”, in turn, should help with financing.

It is questionable, however, whether the full amount of the planned aid will make it through Congress, because this time the Democrats would eventually also have to secure the partial support of the Republicans, which is likely to prove difficult given the fact that, as part of the package, measures from the previous government, among others, are to be rolled back.

Fed Chairman Powell affirmed, among other things, that inflation would only pick up temporarily. As could already be read in a speech published in advance, the domestic economy recovered from the Corona slump faster than expected. However, the recovery was far from complete, which is why the central bank would support the economy “as long as necessary”, Powell said.

Besides, tensions between the world’s two largest economies, the US and China, remained a major issue today and weighed on trading sentiment.

Markets on Wall Street declined today. The Dow Jones had already started weaker and extended its losses more significantly. It ended the day down 0.94 per cent at 32,422.43 points. The tech index NASDAQ Composite also fell, closing 1.12 per cent weaker at 13,227.70 points.

Prices on Wall Street extended their losses as Powell said some assets had reached elevated valuations. In addition, the intensification of relations between China, on the one hand, the USA, the EU and Canada on the other, caused uncertainty in the markets. First, the Western countries imposed sanctions against Beijing, and then China implemented countermeasures. Market participants fear that the tensions will have negative economic consequences.

Despite positive guidance from the US stock markets on the previous day, the Asian markets fell back on Tuesday. High bond yields thus also weighed on markets in the Far East. Besides, the tightening of relations between China, the USA, the EU and Canada also caused concern among investors in Asia. After Western countries imposed sanctions on Beijing for its actions against the Uyghur Muslim minority, China reacted and imposed sanctions on the EU.

The European stock exchanges also fell in Tuesday trading. The EuroSTOXX 50 closed 0.18 per cent weaker in the evening at 3,827.02 points.

The leading German index DAX, on the other hand, was able to hold its ground and even closed with a marginal plus of 0.03 per cent at 14,662 points. The TecDAX gained somewhat more after its hardly changed start and closed with a gain of 0.27 per cent at 3,416.11 points.

Across Europe, high infection figures in the corona crisis and massive restrictions to contain the viral disease weighed further.

From Maundy Thursday to Easter Monday, public, economical, and private life in Germany is largely shut down to slow down a third wave of the “pandemic”. However, on the stock market, trading will be regular on Maundy Thursday, according to Deutsche Börse.

The initially gloomy, later mixed mood on the stock markets drove investors towards the greenback on the foreign exchange market. The euro came under pressure on Tuesday and gave back its gains from the start of the week. Most recently, 1.1854 US dollars were paid for the common European currency. The euro was mostly burdened by broad-based strength in the US dollar, and other currencies also suffered. The dollar benefited once again from its status as the world’s reserve currency.

The tension between Western countries and China also weighed on today’s oil prices. Among other things, this raises doubts about a rapid economic recovery and an associated increase in demand for raw materials. As a result, US WTI crude fell by 6 per cent to 57.94 US dollars per barrel. Brent oil also slumped 6.1 per cent to 60.38 US dollars a barrel. Oil producers such as Occidental and Callon suffered losses of up to 4.2 per cent.

Other commodities and precious metals came under renewed selling pressure as well. For example, the price of gold dropped more than $12 to $1,727 per troy ounce, and silver fell sharply to the key support level around $25.

Cryptocurrencies came under further pressure with the rising dollar strength as well. Bitcoin and Ethereum dropped an additional 2 per cent compared to the previous day to $53,700 and $1,658, respectively. Altcoins, such as XRP or Polkadot, even lost more than 5 per cent on the day, after rising a day earlier. Only THETA token gained a whopping 29 per cent to $13.50.

Unemployment in Great Britain has surprisingly fallen despite the Corona crisis. In the first three months to January 2021, the unemployment rate fell by 0.1 percentage points to 5.0 per cent, the statistics office ONS announced in London on Tuesday. Analysts, however, had expected an average increase to 5.2 per cent. According to the statistics office, 1.7 million people were looking for work in Great Britain. In the three months to December last year, the unemployment rate stood at 5.1 per cent, the highest level in almost five years.

The US current account widened its chronic deficit significantly both in the fourth quarter and in 2020 as a whole. In the final quarter, the deficit rose by 7.6 billion US dollars or a good 4 per cent to 188.5 billion dollars compared to the previous quarter, as the Department of Commerce announced today in Washington. Analysts had expected a somewhat smaller deficit. For the full year 2020, the current account deficit increased by $167 billion, or just under 35 per cent, to $647.2 billion. The development is due to a higher trade deficit and lower surpluses in the services and income balance.