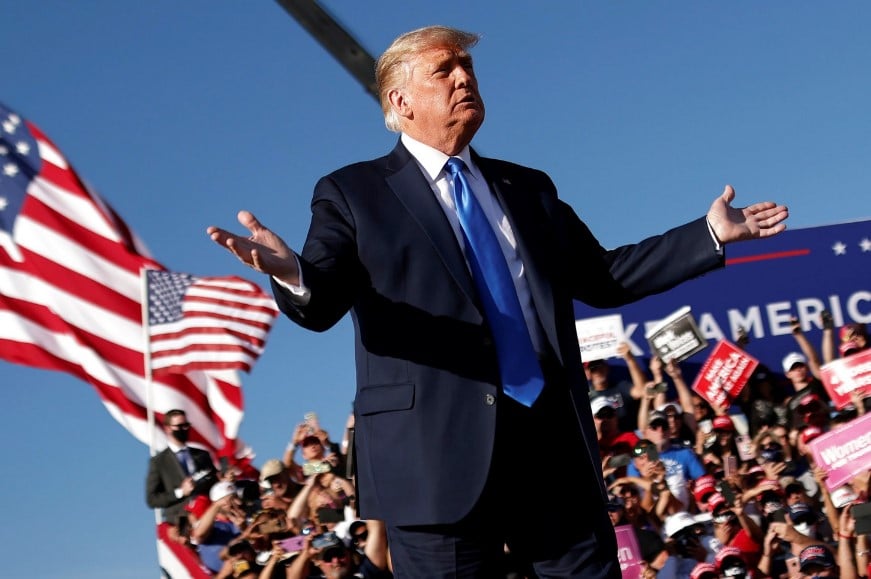 Investors are also reacting with joy to the news that an orderly transition to the Biden government is looming in the White House as a result of Donald Trump’s yielding. The stock market is also pleased about this because it hopes that this will speed up the process of an economic stimulus package. Some market participants commented that the scenario of a week-long hanging lot in Washington would thus gradually be priced out on the market.

But will this bet pay off? Somehow everything feels like the calm before a big storm, because the (still) incumbent President Donald Trump is still presenting himself all too confidently. Also, the idea that the coronary restrictions would soon come to an end sounds naive and unrealistic.

The US stock markets have left the Tuesday trading session with strong gains. The Dow Jones started trading with a plus of 0.52 per cent at 29,746.11 points and, for the first time in its history, passed the 30,000 point mark. The stock market barometer was able to take this historic reading with it into the end of the day and closed 1.54 per cent higher at 30,045.84 points. The NASDAQ Composite also recorded gains in Tuesday trading and left the market with a plus of 1.31 per cent at 12,036.79 points.

The news that US President Donald Trump would now admit defeat to Joe Biden in the fight for the presidential election on Tuesday provided a boost on the stock markets.

The markets in the Far East took different directions on Tuesday. In Tokyo, the Japanese leading index Nikkei closed at 26,165.59 points after a long weekend due to a public holiday with a gain of 2.50 per cent. This was the highest closing level since May 1991. The fact that central bank chairman Haruhiko Kuroda promised to stick to the ultra-loose monetary policy on a grand scale went down well with investors.

Tailwind was provided both by the hope of soon available corona vaccines and the fact that US President Donald Trump now wants to hand over official business to Joe Biden after all. However, the rising number of corona infections and the concern that the US could impose further sanctions on Chinese companies depressed the mood.

The European stock markets were firmer on Tuesday. The EuroSTOXX 50 closed 1.29 per cent stronger at 3,507.56 points.

Germany’s leading index, the Dax 30, left trading with a plus of 1.26 per cent at 13,292.44 points. It thus approaches the technical resistance line at 13,339 points. If this hurdle is overcome, the way would be clear for further price gains, chart analysts are convinced. Even the all-time high marked in February at 13,795 points would then come within reach again. In contrast, the TecDAX lost ground over the day, having risen at the start. Its closing level was minus 1.16 per cent and thus 3,018.53 points.

The prospect of the early availability of corona vaccines provided confidence and investors are thus hoping for an end to the severe restrictions on public life. Positive signals from the US and Wall Street also provided support.

The euro has gained slightly on the bottom line after another volatile Forex trading day. Most recently, the common currency was sold for 1.1880 US dollars.

Oil prices continued to rise on Tuesday, reaching the highest level since the first corona wave in the western world. North Sea Brent was sold for up to almost 48 US dollars per barrel, while US crude oil (WTI) was traded for over good 45 US dollars at its peak. These are the highest oil price levels since March.

The precious metals and gold, in particular, were once again under a lot of selling pressure. Gold dropped as low as to the $1,800 round-mark. Only then some buying-interest was triggered, and gold closed at $1,803 per troy ounce.

Cryptocurrencies, on the other hand, were once again capturing a great amount of attention, continuing their powerful ascend. Bitcoin finally received some attention again, leaving the $18,000 to $18,700 trading range and popping over the $19,000 hurdle, adding 3.2 per cent on the daily and is now eying its previous all-time-high. Ethereum shot up as high as to $620, while XRP ran up to the $0.80 mark. Both digital assets consolidated later during the day but are holding strong, and charts are pointing up further. However, today Stellar Lumens (XLM) had its truly stellar day and shot up from $0.12 to $0.19 in just 24 hours.

As expected, the mood in the top echelons of the German economy deteriorated further in November, although the assessment of the current business situation remained at a surprisingly high level. Given the foreseeable longer partial lockdown, however, the mood of companies in Germany continues to cloud over.

The ifo business climate index fell to 90.7 (October revised: 92.5) points, according to the Munich-based ifo institute following its monthly survey of around 9,000 managers. Economists surveyed by Dow Jones Newswires had expected a decline to 90.6 points.

The mood of US consumers clouded over more than expected in November. The corresponding barometer fell to 96.1 points from 101.4 points in October, according to the Institute Conference Board on Tuesday, citing its survey.

The high-flying US electric car maker Tesla’s rise on the stock market is causing the assets of company boss Elon Musk to continue to grow. In the billionaire ranking “Bloomberg Billionaires Index” the 49-year-old star entrepreneur has overtaken Microsoft co-founder Bill Gates and is now considered the second richest person in the world.

The figures in billionaire charts like the “Bloomberg Billionaires Index” or the “Forbes” lists are merely estimates based on publicly available information on assets such as stocks, real estate, art objects and other luxury goods. Musk ranks fourth in the “Forbes Billionaires List” with $110.5 billion in assets.

Mytheresa before US IPO

The German online luxury dealer wants to dare the jump on the parquet in the USA. Both the number of shares and the price range for Mytheresa’s IPO have not yet been determined, the parent company MYT Netherlands announced. The company, which sells clothing from 250 of the world’s largest fashion brands such as Prada, Gucci, Burberry and Dolce & Gabbana, could aim for a valuation of one to 1.5 billion dollars, according to a report by the news agency Bloomberg. A successful Christmas business could still drive up the valuation. As a result of the current crisis, online trade is flourishing, especially with luxury products.