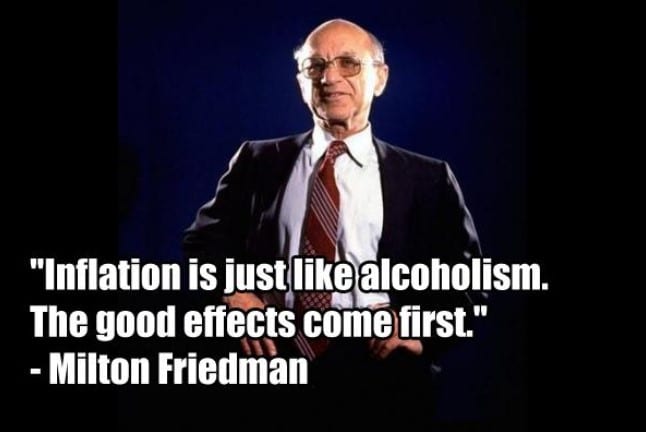 We live in strange times, where it gets harder and harder to make sense of the markets as equity markets have completely decoupled from reality. Well, clearly this insane disconnect was mainly caused by the Central Banks of the world when they decided to print even more money and add trillions of dollars, euros, yen, etc. to the nations’ debt within just the last few months. One thing we all should keep in mind is the following:

In 1980, Milton Friedman famously compared the effects of inflation to alcoholism: “Inflation is just like alcoholism. In both cases, when you start drinking or when you begin to print too much money, the good effects come first, but the bad effects only come later. That is why, in both cases, there is a strong temptation to overdo it – to drink too much or to print too much money.”

Slightly positive signals from the trade talks between China and the USA could not sustain the rally any further. Despite continuing US-Chinese tensions, both parties are sticking to their Phase 1 agreement. Meanwhile, consumer sentiment in the USA deteriorated unexpectedly sharply in August, which caused some headwind.

There were also price movements on Tuesday, among other things in connection with impending changes in the Dow Jones. Apple’s stock split will take effect on August 31, reducing the weighting of the iGroup in the leading index and requiring another tech stock to close the gap. Salesforce will, therefore, take the place of ExxonMobil.

On Tuesday, the signs on the Asian stock markets were different.

The Chinese markets were negatively impacted by the fact that there were no concrete results to be heard after the talks between China and the USA. The US Department of Commerce merely entitled the telephone conversation “constructive dialogue”. In Tokyo, the hope for a vaccine to arrive in the near future was held up high.

European markets were cautious on the second trading day of the week.

The EuroSTOXX 50 had started marginally higher, but in the afternoon the mood changed, and profits gradually crumbled. It ended 0.06 per cent lower at 3,329.71 index units.

The coronavirus, as well as the talks between China and the US, were again in the focus of traders and investors on Tuesday. However, economic optimism did not last long on Tuesday, after the German GDP was revised upwards to minus 11.3 per cent year-on-year.

The German stock market was also unable to keep its gains on Tuesday. The Dax 30 presented itself with a clear plus at the start of trading and was initially able to climb further. In the course of the afternoon, however, it relinquished its gains. Ultimately, the board showed a marginal minus of 0.04 per cent to 13,061.62 points. The TecDAX had started slightly higher and remained on green ground. It ultimately gained 0.45 per cent to 3,131.55 index points.

On the Forex market, the euro rose somewhat on Tuesday, supported by improved sentiment in the German economy. The common European currency was last traded in New York at 1.1831 US dollars.

Oil prices also rose slightly on Tuesday. Since the beginning of the week, oil prices have been moving in a relatively narrow trading range. A barrel of North Sea Brent is sold at 45.92 US dollars, 78 cents more than the day before. The price for West Texas Intermediate (WTI) rose by 68 cents to 43.30 US dollars.

Gold continued trapped in between a band of firm support and resistance levels. Having opened around $1,930, the price oscillated between $1,915 and $1,930, closing almost unchanged at $1,930.

The digital asset space remained under firm pressure, and most major cryptocurrencies decreased in value. Bitcoin lost 2.6 per cent to 11,300, while Ethereum dropped by 4 per cent to $383 and XRP reducing by 3 per cent to $0.2770.

The mood among US consumers weakened in August. According to the research institute Conference Board, the US consumer confidence index fell to 84.8, while economists had expected a level of 92.5. The previous month’s figure was revised downwards to 91.7 from 92.6.

The survey’s editor, Lynn Franco, said that consumers’ assessments of their finances and short-term outlook had deteriorated significantly.

The business climate in the German economy developed somewhat better than expected in August. The business climate index surveyed by the Munich-based ifo Institute rose to 92.6 (July revised: 90.4) points. This is the highest value since February. The economists surveyed by Dow Jones Newswires had forecast a level of 92.0 points. A value of 90.5 was provisionally reported for July.

The business situation assessment index increased to 87.9 (84.5) points, whereas 87.0 points had been expected. The business expectations index climbed to 97.5 (revised 96.7) points. The forecast had been 98.0, and the preliminary July value was 97.0. “The German economy is on course for recovery,” the economic researchers commented on the data.

Business with single-family homes in the USA picked up surprisingly strongly in July. The number of new home sales increased by 13.9 per cent to an annual rate of 901,000 units compared to the previous month, the Department of Commerce announced on Tuesday.

This is the highest level since December 2006, i.e. well before the financial crisis (which, as is well known, started with the detached US housing market). Experts had only expected growth of 1.3 per cent. The fact is that real estate financing is becoming cheaper again for broad sections of the population since the Fed cut interest rates to zero per cent. Doesn’t that sound familiar somehow?

According to the US airline and Lufthansa competitor American Airlines, it is threatened with massive job cuts if the government does not offer further assistance to the industry in the corona crisis. 40,000 to 100,000 employees would then reduce the total workforce, the management explained.

The US airlines have 25 billion US dollars in government support available until the end of September to pay salaries and secure jobs. Industry representatives and trade unionists are demanding a further 25 billion dollars for the period from October.

Massive job cuts were also announced today at the Australian airline Qantas and Finland’s Finnair. At Germany’s Lufthansa, too, there is an enormous personnel surplus.

Meanwhile, the death bell rings for ex-index member Wirecard. On Tuesday, the Munich Local Court opened insolvency proceedings against Wirecard AG and six of its subsidiaries. The insolvent payment processor is putting more than half of its approximately 1,300 employees in Germany out on the street and is on the verge of being broken up.

“The economic situation of Wirecard AG was and is extremely difficult given the lack of liquidity and the familiar scandalous circumstances,” said insolvency administrator Michael Jaffe on Tuesday.