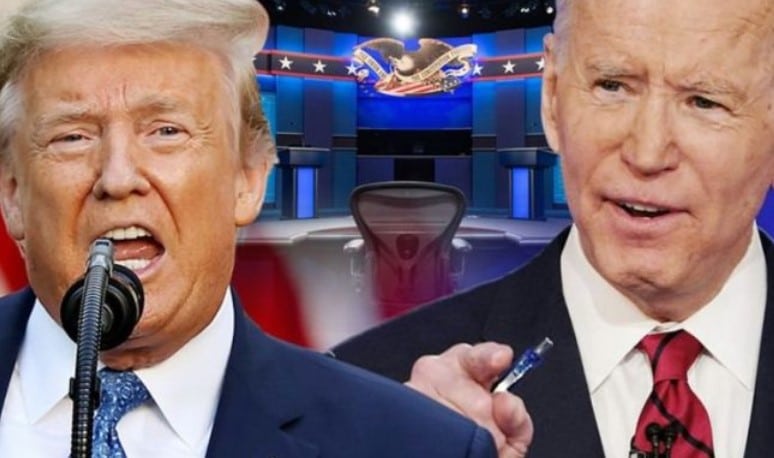 Ready for the first battle

The US election campaign is casting its shadow with the TV duel between Trump and Biden scheduled for tonight. Besides, the corona crisis continues to weigh heavily on the stock market. It is no wonder that after the previous day’s bull market, investors have been putting themselves on hold.

Speaking of the US election: Starting at 3:00 CET, the first eagerly awaited TV duel between President Donald Trump and challenger Joe Biden will begin. The traditionally highly regarded TV duels between the presidential candidates could be decisive for the election and are therefore a hot topic on the stock market. In any case, investors on Wall Street are holding back in advance, which means that other global markets should not expect a tailwind from New York tomorrow.

On the whole, politics in this country is also conveying unrest and concerns about the corona crisis. Chancellor Angela Merkel said today in Berlin, after consultations with the state premiers, that there is a significant increase in the number of infections, especially in metropolitan areas. A renewed shutdown, i.e. a widespread shutdown of economic and social life as in spring, must be prevented at all costs.

If the dynamic of new corona infections continues as it has recently, Germany could, according to Merkel, record 19,200 infections per day in three months. This shows the urgency with which the further spread of the pandemic must be countered.

On Wall Street, there was some restraint on Tuesday, as the US presidential election campaign cast its shadow.

The Dow Jones started little changed but then fell more sharply into negative territory, ending the day 0.48 per cent lower at 27,451.81 points. The NASDAQ Composite also started close to its previous day’s closing price and then fell slightly as the day progressed. It left trading 0.29 per cent lower at 11,085.25 points.

On Wall Street, the air was out on Tuesday after a recovery rally that lasted several days. The election campaign for the US presidency became more and more the focus of attention on Wall Street. Investors held back from the television debate between the two candidates Trump and Biden.

The Democrats’ draft for a USD 2.2 trillion economic stimulus package was met with scepticism by investors, as it is still considered difficult to implement in the market.

In Asia, the stock markets largely continued to rise on Tuesday after the substantial gains at the beginning of the week. The Japanese leading index Nikkei 225, closed 0.1 per cent higher at 23,539 points. In China, the CSI 300 index gained around half a per cent. By contrast, the Hang Seng Index of the Chinese Hong Kong Special Administrative Region fell by 0.5 per cent.

The European stock markets tended slightly downwards as investors decided to take some profits. The EuroSTOXX 50 closed 0.28 per cent lighter at 3,214.30 points.

Initial profit-taking is not surprising given the smouldering uncertainties. With the corona pandemic, the Brexit worries and the US presidential election already casting its shadow, risk appetite remains low.

Eurozone economic data provided some impetus in the morning. In September, economic sentiment in the Euro area had continued to recover from its severe slump. The Economic Sentiment Indicator (ESI) compiled by the EU Commission rose more strongly than analysts had expected on average. However, the common currency hardly reacted at all to the German inflation data of minus 0.2 per cent compared to the previous month.

The exchange rate of the euro rose on Tuesday on the Forex market significantly above 1.17 US dollars. In New York trading, the common currency reached a daily high of $1.1745 and was last traded at $1.1739. Commerzbank has recently seen the euro at an advantage again and lowered their vote for the US dollar from “Neutral” to “Underweight” on Tuesday. The arguments are the very expansive new strategy by the US Federal Reserve, the sharply reduced yield advantage, the budget gap that was high in corona times, the uncertainty ahead of the US elections and, conversely, rising confidence in the euro. They see the latter in connection with the agreed reconstruction fund.

Oil prices fell sharply on Tuesday and gave up some of their profits from the start of the week. A barrel of Brent oil fell by $1.30 to 41.13 US dollars. The price for US West Texas Intermediate (WTI) also fell clearly by $1.47 to 39.13 US dollars.

Meanwhile, the gold price continued to rise and by the evening had climbed to almost $1,900 per troy ounce.

Cryptocurrencies continued their consolidation phase with Bitcoin hovering around the $10,700 mark and Ethereum at $355. XRP lost slightly and is currently traded at $0.2410.

Consumer sentiment in the USA improved surprisingly strongly in September. The corresponding barometer rose to 101.8 points, after 86.3 points in the previous month, as the research institute Conference Board announced on Tuesday in its monthly survey. With their spending, consumers are the backbone of the US economy, which was hit hard by the Corona pandemic but has now started to catch up.

However, the head of the Federal Reserve District of Philadelphia, Patrick Harker, was cautious about the pace of recovery in the labour market. He said it would probably take until 2023 to reach pre-crisis levels. He called on Congress to provide additional assistance and is thus entirely in line with bank chairman Jerome Powell.

Tesla boss and SpaceX founder Elon Musk plans another IPO. As the entrepreneur announced via Twitter, he plans to take the SpaceX Internet division Starlink public in the coming years. However, this would only be possible with stable sales growth.

As he wrote, the market does not like “an unpredictable cash flow”, which is why it will take some time before the IPO can take place. Musk said that small investors are particularly important when it comes to jumping onto the trading floor. These were given special priority in the new issue.

Starlink is a project of the space company SpaceX with the goal of launching a total of 12,000 satellites into space over the next few years, with the help of which fast and reliable broadband Internet can be commercially offered worldwide. Up to now, the funds for this project were to be raised from the revenues of the SpaceX parent company, but an IPO would certainly be a welcome financial injection. As reported by the news agency AWP, Gwynne Shotwell, member of the SpaceX management board, had already considered a Starlink IPO in February.

The lithium-ion battery manufacturer Northvolt has received a $600 million capital injection. The investors included Volkswagen, Goldman Sachs and Spotify founder Daniel Ek, Northvolt announced. Northvolt intends to use the new money to expand its capacities and to expand research and development, among other things. Since its foundation by former Tesla manager Peter Carlsson in 2016, the company has raised 3.6 billion dollars in equity and debt capital. Northvolt wants to manufacture batteries for electric cars in Europe and thus compete with Asian suppliers such as CATL and LG Chem. The first “Gigafactory” in Sweden is scheduled to go into operation in 2021.