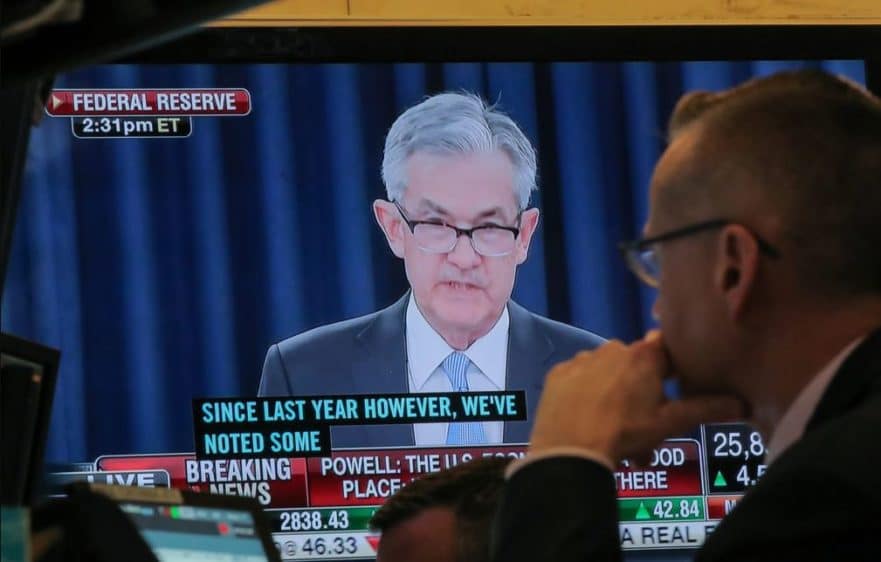 The calm before the storm?

The day before the Fed’s interest rate decision, investors played it safe and stayed in cover. For it is still unclear what the future holds for US monetary policy.

In addition to the prospect of a loosening of US monetary policy, investors expected the soon signing of the negotiated partial agreement in the customs dispute between the USA and China. “Investors are betting that US President Donald Trump will not risk the deal bursting, as pressure is already mounting before the next presidential election.

Most market experts are convinced that the Fed will continue to cut interest rates by 0.25 per cent. If the Fed takes a break after tomorrow’s rate cut – always the third since July – it will depend decisively on how well Powell explains the decision – otherwise, setbacks on the stock markets are probably programmed.

On Wall Street, too, the rally of the previous days was largely halted. The Dow Jones index also climbed briefly to a high of 27,165 points, but had to give up its gains by the close of trading in Frankfurt and fell back to 27,100 points.

The NASDAQ composite also started with a small loss, which it expanded in trading. It went 0.59 per cent lower into the evening at 8,276.85 index points.

The US reporting season also picked up speed on Tuesday. On Monday, Google’s mother Alphabet presented figures after trading and disappointed expectations. Beyond Meat also has a hard time with market participants, despite the black numbers, after the balance sheet presentation.

On Tuesday, the Asian stock markets were mostly down.

In China, the statement of Hong Kong’s head of government Carrie Lam encumbers. She warned that the protests if continued, could drive the Special Administrative Zone into a recession.

There were signs of a slight downward trend in Europe’s stock markets.

The EuroSTOXX 50 remained unchanged at the beginning of the meeting but soon fell slightly into the red. Even at the close of trading, it still showed a small discount of 0.12 per cent to 3,621.44 units.

The DAX had started the day close to the zero line, had fallen somewhat in the meantime, but at the close of trading was able to catch up again with the previous day’s close. It closed marginally 0.02 per cent lower at 12,939.62 points. The TecDAX also showed little change at the start of trading, but subsequently fell into the loss zone, where it remained throughout the trading day. He said goodbye to the evening with a minus of 0.46 per cent at 2,810.18 points.

The British Pound gained against most of its major counterparts after initial losses. The prospect of new elections supported the British currency. Britain is expected to elect a new parliament in December as part of the Brexit dispute. The largest opposition party, Labour, gave up its opposition to a new election. It wanted to approve the electoral law proposed by Prime Minister Boris Johnson this Tuesday, Labour leader Jeremy Corbyn said. This makes early parliamentary elections almost certain.

Gold closed almost unchanged after rising from $1487 to $1495 an ounce during the day. Oil prices also remained mostly unchanged. One barrel of Brent currently costs around $61.50.

Not much changed on the cryptocurrency market either. The overall market cap sits at around $250 billion. One Bitcoin is currently worth $9,450, one Ethereum $190 and one XRP $0.30.

After the failed merger with Renault, the car manufacturer Fiat Chrysler (FCA) has now found a possible new partner in France, according to a press report.

The Italian-American carmaker is negotiating with the Peugeot owner PSA, the Wall Street Journal reported on its website on Tuesday, referring to circles. Later, a similar message was published by the news agency Bloomberg. The companies did not want to comment on this at first. Both companies together would be worth 50 billion US dollars.

The news was well-received on the stock exchange. Fiat Chrysler dropped out of trading in New York at a premium of 7.5 per cent.

The report went on to say that an option is a transaction that takes place entirely through shares. Peugeot CEO Carlos Tavares would lead the company as CEO, while FCA Chairman John Elkann would play the same role in the new company. The talks would be in flux, and other opportunities could be discussed. There is no guarantee that a final agreement will be reached.

Good business with the cancer drug Keytruda also gave the US pharmaceutical giant Merck & Co a boost in the third quarter. Sales this year are expected to be between 46.5 and 47 billion dollars. Previously, the group had assumed sales of between 45.2 and 46.2 billion dollars. Earnings per share (EPS) adjusted for acquisitions, disposals, restructuring costs and other special effects should also climb to between $5.12 and $5.17, compared with the group’s previous forecast of $4.84 to $4.94 billion.

Competitor Pfizer also raised its sales forecast for this year. Now 51.2 to 52.2 billion dollars are expected. Earnings per share are expected to reach between 2.94 and 3.00 dollars. Already in the third quarter, Pfizer earned significantly more than expected with 0.75 dollars per share.