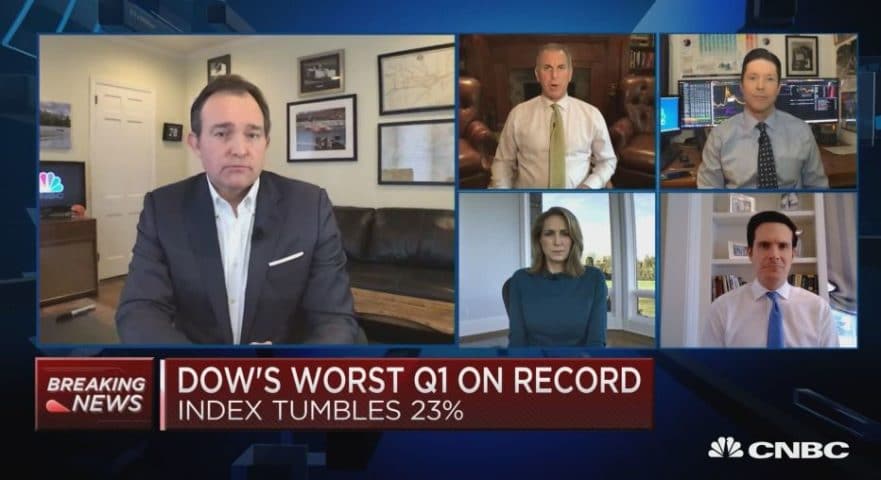 According to the International Monetary Fund (IMF), Europe’s economy is facing a severe recession this year due to the coronavirus pandemic. This is now a certainty given the widespread shutdown of public life, the director of the IMF’s Europe department, Poul Thomsen, wrote in a blog post. For every month in which numerous sectors in the major European economies continue to grind to a halt virtually, annual economic output would be about 3 per cent lower, he wrote. Yesterday, the “economic wise men” also predicted a deep recession for Germany.

According to US President Donald Trump, the US entry ban for visitors from Europe, initially limited to one month, to fight the coronavirus, is to be extended. This and similar restrictions would remain in force and possibly even be tightened, Trump said on Monday at an official press conference in the White House rose garden. He left open until when the entry ban, which was supposed to expire in mid-April, would continue. In terms of the number of confirmed infections, the USA is now the worst affected by the coronavirus pandemic worldwide.

The number of newly infected corona patients and the death rate in the USA continues to rise significantly. At the same time, it is not clear how well the measures taken by the government and the Federal Reserve can counteract the negative consequences. This caused further uncertainty on the trading floors on Tuesday.

Thus, of course, the Coronavirus spectacle remained in the focus of investors on Tuesday and prices once again fluctuated wildly.

On Wall Street, the first quarter of 2020 ended with losses once again.

The US leading index Dow Jones 30 Industrial was highly volatile in the course of trading, but in the end, the sceptics gained the upper hand and even sent the leading index below the 22,000 point mark at the end of the quarter. With a discount of 1.84 per cent, the index ended the quarter at 21,917.16 points. The technology-heavy NASDAQ Composite also lost again, ending the quarter down 0.95 per cent, with the index closing at 7,700.10 points.

On Tuesday, the omens were mixed on the major Asian stock exchanges. In Japan, the Nikkei fell by 0.88 per cent to 18,917.01 points at the close of trading. On the Chinese mainland, the Shanghai Composite finally gained 0.11 per cent to 2,750.30 points. The Hang Seng index in Hong Kong recorded a more significant increase of 1.85 per cent to 23,603.48 index units.

European stock markets were also volatile and mixed on Tuesday. The EuroSTOXX 50 was able to record significant profits in the morning. After a trip into the minus, it could finally gain again and went 0.77 per cent stronger at 2,786.90 points into the end of the day.

The German stock market changed its signs several times on Tuesday. First, the Dax 30 soared high to over 10,000 points, then it turned negative before picking itself up again and finally closing 1.2 per cent higher at 9,936 points. The TecDAX also gained strongly in the morning. Here too, the gains in the course of the trading session were only temporarily lost. In the end, a plus of 1.01 per cent to 2,597.98 units remained.

Nonetheless, in the whole of March, the Dax produced investors losses of more than 16 per cent.

The euro went on a moderate rollercoaster ride in US trading on Tuesday and has recently regained the $1.10 level. Just before the end of trading on Wall Street, the common currency, the euro, was trading at $1.1010. The European Central Bank set the euro reference rate at 1.0956 (Monday: 1.1034) dollars.

Oil prices rose on Tuesday and have recovered somewhat from recent losses. In midday trading, a barrel of North Sea Brent crude cost USD 23.64. This was 88 cents more than on Monday. The price of a barrel of American WTI rose by 1.54 dollars to 21.63 dollars.

The mood in China’s industry has brightened again after a record slump due to the coronavirus. The Beijing Bureau of Statistics announced on Tuesday that the official Purchasing Managers Index (PMI) of the manufacturing sector jumped from 35.7 to 52 points in March. The barometer thus signals growth again. However, market observers warned that the index might overstate the actual improvement. This is because it measures the net balance of companies that report an expansion or a decline. If a company resumes operations after an enforced standstill, this is shown as expansion, which says nothing about the absolute level of economic activity.

The prices of goods imported into Germany fell again in February. The Federal Office of Statistics announced that import prices had dropped by 2.0 per cent year-on-year. Analysts had expected a decrease, but only by 1.5 per cent. In January, producer prices were 0.9 per cent lower than a year ago.

New US economic data turned out somewhat better than feared. In the critical economic region of Chicago, for example, corporate sentiment clouded over only slightly in March despite the onset of the corona crisis. While economists had expected the sentiment to drop to 40 points, the Purchasing Managers’ Index declined by only 1.2 points to 47.8 points compared to February. The consumer confidence published by the research group Conference Board in March also proved to be more stable than expected.

Traffic at Frankfurt Airport is declining more and more due to the coronavirus pandemic. Last week, the number of passengers dropped by 91 per cent to under 119,000 compared to the previous year, which was again significantly less than the last week when just over 331,000 passengers were handled. The decline in air freight was much less severe. This amounted to slightly more than 33,000 tons. Compared to the previous year, however, this also represents a decline of 27.5 per cent.