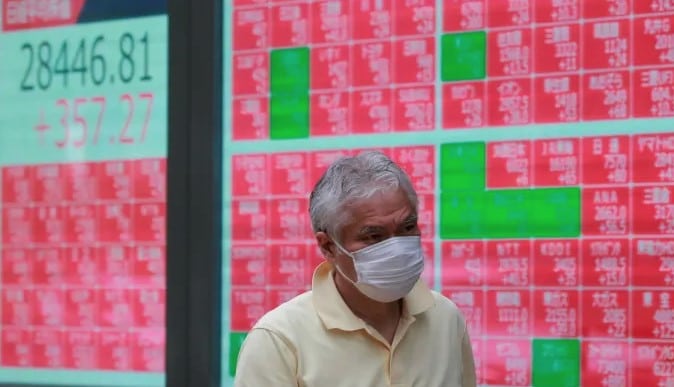 Things went a bit slower on the record-hunting New York Stock Exchange today. After a weaker start, all major US indices moved around their closing prices from Monday. The leading index, Dow Jones Industrial, which recently failed to keep up with the impressive rally in technology stocks, closed slightly down. The other major US stock indices also saw moderate declines.

Market participants spoke of profit-taking and renewed Corona concerns. Wall Street also had to cope with weak economic data from home and abroad. This already came in the morning from China, among others. Above all, the drastic drop in the purchasing managers’ index for the service sector surprised the experts. Corona-related restrictions and high commodity prices also depressed China’s industrial activity.

Investors in the USA held back on Tuesday. The Dow Jones was searching for direction for long stretches of the trading day, with the leading index ending the day at 35,359.08 points, a narrow loss of 0.12 per cent. The NASDAQ Composite did not see any major swings either – the tech index ended the day 0.04 per cent weaker at 15,259.24 index points.

On the corporate side, market participants focused their attention on Zoom Video Communications. Although the video service provider significantly increased sales and profits, it is becoming more cautious concerning its outlook.

The stock markets in Asia turned into the profit zone on Tuesday. The Japanese benchmark index Nikkei ultimately gained 1.08 per cent to 28,089.54 points. While the Shanghai Composite on the Chinese mainland was able to gain 0.45 per cent to 3,543.94 points by the end of trading, the Hang Seng in Hong Kong also ultimately climbed by 1.33 per cent to 25,878.99 units.

Asian markets closed higher on Tuesday – Chinese markets in particular initially slipped after weaker-than-expected purchasing managers’ indices for the manufacturing and service sectors in China in August but recovered in the day. The latter even dropped below the expansion threshold. In addition, further regulations in Hong Kong put renewed pressure on technology stocks.

Investors in the European markets were initially optimistic on Tuesday, but the good mood on the stock markets did not last. The EuroSTOXX 50 started trading with a marginal profit but ultimately ended 0.06 per cent lighter at 4,196.41 points.

The German benchmark index also gave up its gains and slipped into the red. At the sound of the opening bell, the DAX was still up and briefly even managed to climb back above the 16,000 point mark. Intraday, the gains became smaller and smaller until the leading index ultimately ended the day 0.33 per cent lower at 15,835.09 points. Although the TecDAX started the day on a firmer footing, it also felt the effects of increasingly poor investor sentiment and slipped into red territory. It ultimately closed 1.2 per cent lower at 3,900.62 points.

On Tuesday, the focus was on EU consumer prices (CPI) in the morning, which were expected to be 2.7 per cent higher than last year. In addition, unfavourable news for the global economy came from China – where the official Purchasing Managers’ Index (PMI) for the service sector had fallen below the expansion threshold of 50 points.

Experts also attributed the fact that investor sentiment tipped during the day to ECB comments, among other things. ECB council member Holzmann had spoken out in favour of reducing the PEPP programme in the fourth quarter. Investors were also concerned about a possible reduction in pandemic aid that he had mentioned.

Europe’s common currency reached its highest level on the foreign exchange market in the afternoon since the beginning of August. At its high for the day, the euro had climbed to 1.1845 US dollars but fell back to 1.1806 dollars during the NY session.

Oil prices struggled to find a clear direction today. Initial losses were almost completely made up in the evening. The cost of a barrel of Brent crude fell by 37 cents to 73.04 US dollars. The WTI barrel price declined by 28 cents to 68.93 dollars. The focus is on a meeting of the oil alliance Opec+, which is scheduled for Wednesday. Together with allied producer countries such as Russia, the oil cartel Opec wants to discuss future production. The expected development of oil demand is likely to be particularly important.

The gold price dropped intraday briefly to $1,801 before bouncing back to $1,814 per troy ounce.

In China, the official Purchasing Managers’ Index (PMI) for the service sector fell below the expansion threshold of 50 points to 47.5, the lowest level in 18 months.

Encouraging signals came from the German labour market. The situation continued to improve in August despite the summer break. According to the Federal Employment Agency (BA), the number of unemployed fell by 12,000 to 2.578 million compared to the previous month, according to Federal Employment Agency. The unemployment rate remained unchanged at 5.6 per cent. In addition, the number of short-time workers fell to 1.59 million in June.

The mood of consumers in the USA also deteriorated significantly in August. As the Conference Board market research institute announced in Washington on Tuesday, consumer confidence fell by 11.3 points to 113.8 points compared to the previous month. This is the lowest level since February. On average, analysts had predicted a decline to 123.0 points.