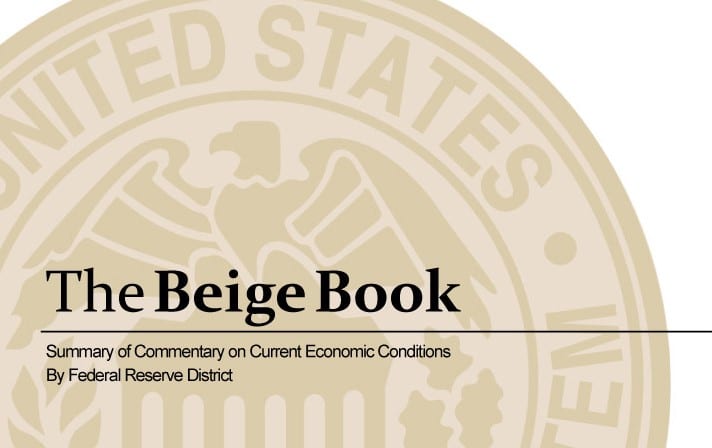 The Federal Reserve’s economic report hardly moved the US stock markets. There was little that was informative.

The Fed’s eagerly awaited economic report, the “Beige Book”, did not provide any new impetus for today’s stock market. The central bank noted that the economy had grown at a moderate pace between the beginning of April and the end of May, but at the same time, problems in the supply chains had a negative impact.

The economic participants surveyed were still optimistic and expected growth to remain solid. However, the situation in the labour market remains tense. The stock market hardly reacted to these rather general statements, which were not new. Investors had hoped for more concrete indications of whether and when the economic data would make a change in monetary policy more likely. Now, all eyes will be on Friday’s US labour market report (NFP).

The US stock markets made no bigger movements on Wednesday. The Dow Jones opened the session slightly firmer but only hovered around the zero lines in the session and closed with a marginal gain of 0.07 per cent at 34,600.38 points. The NASDAQ Composite was in the red territory at times but still managed to gain 0.14 per cent to 13,756.33 units by the end of trading.

Investors are currently oscillating between hopes for the economy and fears about interest rates, with the two sources of impetus currently more or less balancing each other out. In the evening, investors focused on the US Federal Reserve’s Beige Book economic report. According to the report, economic growth is accelerating somewhat. Unsurprisingly, the report also addressed price pressures once again.

On the corporate side, the quarterly reporting season is drawing to a close. For example, the video conferencing service Zoom presented figures for the past quarter after trading hours on the previous evening.

As of Tuesday, there were no significant movers Wednesday. The report on the situation in the US labour market on Friday is eagerly awaited. Some investors expect this to provide meaningful data on the state of the US economy and the development of the global economy.

The European stock markets were able to record moderate gains in the middle of the week. The EuroSTOXX 50 was almost flat at the start of trading but managed to climb in the day and ended the session up 0.41 per cent at 4,088.50 index units.

The Frankfurt stock market, like elsewhere, was anxiously awaiting the Federal Reserve’s economic report. In the process, the DAX achieved its third closing record in four days at 15,602 points, a moderate daily gain of 0.2 per cent. The TecDAX, on the other hand, slipped deep into the red and closed 1.43 per cent weaker at 3,363.35 points.

After the DAX set a new record high of 15,685 points on Tuesday, investors took it easy on Wednesday. Even though the slightly positive mood remained, the Corpus Christi holiday was already casting its shadow. It is, therefore, possible that some market participants were already thinking about the long weekend and did not want to position themselves in a risky way.

The exchange rate of the euro has largely recovered interim losses on the forex market. In the evening, 1.2210 US dollars was paid for one euro. The Turkish lira is currently experiencing another dramatic crash. During the night, one dollar was paid up to 8.80 lines at times, the highest price ever. Trading with the euro also reached a record low. Here, up to 10.75 lines had to be paid at times before the lira recovered somewhat. The record low was reached after President Recep Tayyip Erdogan called for interest rate cuts by the country’s central bank in a television interview.

After yesterday’s weakness, the gold price appreciated by almost 10 dollars to $1,908 per troy ounce.

Sales in the German retail sector fell sharply in April. The Federal Statistical Office cited the federal emergency break in the second half of April and the strong Easter business in March as possible causes. As the statistics office announced based on preliminary data, sales after deduction of inflation fell by 5.5 per cent compared to the previous month. Economists polled by Dow Jones Newswires had forecast only a 2.0 per cent drop. On an annual basis, sales in April were 4.4 per cent higher after adjusting for prices.

Industrial producer prices in the eurozone rose noticeably in April. Prices at the producer level climbed by 1.0 per cent compared to the previous month, as reported by the statistics authority Eurostat. Economists had expected such an increase in the consensus of their forecasts. Year on year, producer prices were 7.6 per cent higher. The estimates of economists had been for a plus of 7.4 per cent. For the EU as a whole, Eurostat reported a 0.9 per cent increase in producer prices compared to the previous month, with prices up 7.6 per cent year-on-year.

The economic recovery in the USA has continued, according to a report by the US Federal Reserve. According to the economic report (Beige Book), the economy grew at a moderate pace from April to the end of May. The speed of growth increased somewhat compared to the previous period. Vaccinations and the lifting of corona restrictions supported the economy, the Fed wrote. The effects of the increased vaccination rates were most noticeable in consumer spending. Especially leisure travel and restaurants benefited. However, the labour market situation remains tense. Many companies in the service sector are finding it more difficult to find workers after the Corona crisis. This is especially true for the low-wage sector. Price pressure has increased since the last report. Prices for construction materials and industrial raw materials, in particular, have risen significantly. Industrial production also continued to grow. However, problems in the supply chains had a negative impact. Nevertheless, according to the Fed, the economic participants surveyed are still optimistic and expect solid growth.