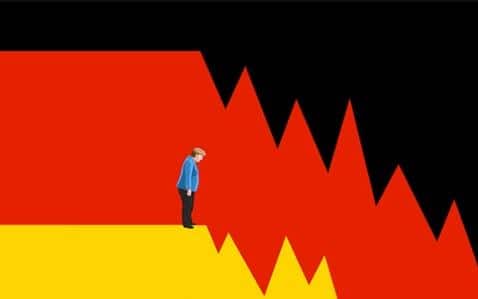 One day before the day of German reunification, the markets seem to be falling back into panic mode. The first autumn storm caused a major upheaval in share prices world-wide. The Dax fell below the 12,000 mark for the first time in four weeks – due to economic worries. Investors fled to gold.

The golden autumn on the stock markets is over for the time being: After the significant rise in share prices in recent weeks, sentiment has now noticeably deteriorated. In the first two days of October, the Dax completely lost its September profits again.

Fears of a global economic slowdown pushed the Dax down deep into the basement on Wednesday. It dropped by 2.8 per cent and slipped below the psychologically critical threshold of 12,000 points. The losses on the other stock exchanges in Europe were even more significant. The EuroStoxx50 fell by three per cent, the Cac 40 in Paris by 3.1 per cent and the London FTSE 100 by as much as 3.2 per cent.

The US industry is increasingly feeling the effects of the trade dispute with China. Weak economic data is fueling fears of recession – and causing severe losses on the stock markets. The Dax is accelerating its slide. Fear on the stock markets is back. After disappointing industry data from the USA on Tuesday, investors now fear a global economic slump. The approaching Brexit showdown is causing additional nervousness.

Additionally, the weak Wall Street accelerated the descent of Dax, Cac40 & Co. in the afternoon. Two hours before the close of trading, the Dow was about two per cent down. The market-wide S&P 500 and the technology-heavy Nasdaq 100 suffered similar losses, “The effects of the still ongoing trade conflict between the US and China seem to have arrived in the real economy,” IG market observer Christian Henke said. “The mood has become fragile,” said Craig Erlam of broker Oanda.

The mood in US industry has not been as bad as it has been since the financial crisis. The ISM Industry Index published the previous day fell to a ten-year low. The early afternoon job report published by service provider ADP also fell short of expectations. Instead of the expected 140,000 new jobs, “only” 135,00 new jobs were created in the US private sector. This is a bad omen for Friday’s official labour market report. The experts of the British bank HSBC now see the ISM index for the service sector, which is expected on Thursday, as the next test for the economy.

There are also fears that the conflict between the US and Europe will enter a new round. In the dispute over subsidies for the European aircraft manufacturer Airbus, the World Trade Organization (WTO) ruled that the US may impose punitive tariffs on EU goods worth 7.5 billion dollars. While the EU urged prudence, France announced that it would react decisively to any US tariffs.

Asian stock markets also fell on Wednesday. In Japan, the leading index Nikkei closed 0.49 per cent lower at 21,778.61 points. The stronger yen, which investors are currently visiting as a “safe haven”, had a negative impact.

There was still no trading on the Chinese mainland due to the “Golden Week”. Most recently, the Shanghai Composite fell by 0.92 per cent to 2,905.19 points on Monday. On the other hand, trading on the Hong Kong stock exchange resumed after a one-day break. The Hang Seng fell by 0.19 per cent to 26,042.69 units by the close of trading.

The massive slump in global indices and share prices naturally caused the gold price to rise significantly. Investors are fleeing back into the precious yellow metal, pushing the price above the $1,500 mark.

Oil prices also came under pressure again today, Wednesday. The Brent variety fell by more than 1 per cent to about $57.50 a barrel. WTI Oil also fell by about 0.90 per cent to $52.50 a barrel.

The imminent showdown in the Brexit dispute further unsettled investors. The pound depreciated by a further 0.4 per cent to 1.2249 dollars. Despite the weaker national currency, the British stock market also fell under the wheels. In the Brexit dispute, Prime Minister Boris Johnson presented his final settlement proposal for the European Union around noon. “Let’s go through with the Brexit”, he called out to the delegates at the congress of his conservative party in Manchester on Wednesday.

On the positive side, the heavily shaken euro was able to pick itself up somewhat. The common currency was quoted at 1.0950 dollars in the evening. On Tuesday, the euro had temporarily fallen to below 1.09 dollars, its lowest level since May 2017.

The cryptocurrency remained mostly unchanged with no major price movements in the top 10 digital assets such as Bitcoin, Ethereum or XRP.

Trade with the Best Brokers for Crypto Currencies

According to a decision of the World Trade Organization (WTO), the USA is allowed to impose customs duties on EU imports worth 7.5 billion euros in the dispute over subsidies for Airbus. The WTO’s dispute settlement body announced this in Geneva on Wednesday. In an initial reaction, the EU Commission warned that US tariffs would be short-sighted and counterproductive. For 15 years, the USA and Europe have been arguing before the WTO over billions in state aid for the aircraft manufacturers Airbus and Boeing, which the WTO has declared inadmissible in each case. According to the ruling, Airbus shares lost 1.3 per cent.

The Norwegian pension fund, the largest sovereign wealth fund in the world, intends to gradually divest itself of holdings in companies in the oil industry. A total of 95 companies are affected by the decision, according to the Norwegian Ministry of Finance. It is estimated that these investments are worth around 5.4 billion euros. The sovereign wealth fund will be fed with revenues from Norwegian oil and gas production. It manages almost one trillion dollars. About two-thirds are invested in shares.

The merger of two betting game providers creates the world’s largest provider of online betting and gambling games by turnover in Ireland. A smart move in a competitive market.

The owners of Dublin-based Paddy Power Betfair and Isle of Man-based Poker Stars want to merge their businesses, the companies announced Wednesday.

Flutter Entertainment is the result of an earlier merger of Paddy Power and Betfair. Following the merger with Poker Stars, Flutter Entertainment’s shareholders hold around 54.6 per cent of the new company. The shareholders of the Stars Group (TSG), to which Poker Stars belongs, hold almost 45.4 per cent. In the year 2018, the companies could have obtained a conversion of 3.8 billion pounds together. Thus the Flutter TSG lies world-wide in front. Vorbörslich the share of the star Group increased by more al 40 per cent.

With increasing numbers of bettors on the Internet and on smartphones, the merger is a smart move to survive in a competitive market. Other providers have also joined forces in the market.

Increasing requirements and taxes in the main markets, Ireland, Great Britain and Australia make the conditions of the companies for online betting and Internet games more difficult. The new company wants to benefit in particular from the looser rules in the USA.

Because of the strong criticism of Facebook’s planned digital currency Libra, some major partners are rethinking their participation in the project according to US media. The credit card giants Visa and Mastercard, as well as other financial partners, have been deterred by political resistance in the USA and Europe, the Wall Street Journal reported, citing insiders. According to the journal, Facebook has been rebuffed by some of the companies involved with the request to express public support for Libra.

The office lessor WeWork is coming under increasing pressure following the cancellation of the IPO. The rating agency Fitch now downgraded the creditworthiness of the company lower into the junk segment and threatened a further reduction. Without an IPO, WeWork would not have sufficient funds to implement its growth plans, explained Fitch. WeWork wants to cut jobs and slow down expansion. According to the Wall Street Journal, the new WeWork management is, therefore, considering slowing its growth in China.

WeWork’s high-flying stock market plans were a smashing failure. Potential investors were disturbed by the high losses and the role of the founder and former CEO Adam Neumann, who had to take his hat off after massive criticism.