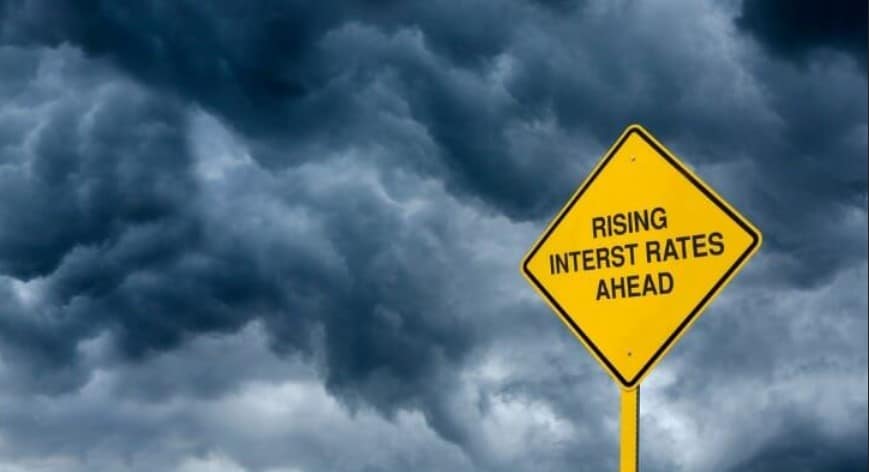 It was not only the corona theme that dominated the stock markets once again today. Both here in Germany and the USA, bond yields rose again and put a spanner in the stock market bulls’ works. The yield on the benchmark ten-year US government bonds rose to 1.481 per cent. A rise to more than 1.5 per cent is a strong headwind for the stock market in many analysts’ view. Rising bond yields mean higher financing costs for governments and companies.

The one-year high from last week was still quite a bit higher, at around 1.55 per cent, but the ups and downs of capital market rates seem to be continuing with the new rise. Rising growth and inflation expectations in the USA are seen as the trigger.

Technology stocks, in particular, again came under the wheels today.

The US stock markets went down sharply in the middle of the week.

After a weak start, the Dow Jones fought its way into the profit-zone but could not defend it permanently and closed with a loss of 0.38 per cent at 31,272.44 points. The NASDAQ Composite extended its loss from early trading, ending the day down 2.70 per cent at 12,997.75 index points.

Positive impulses were provided by US President Joe Biden’s promise to provide enough vaccine for all US adults by the end of May. According to original plans, this goal was not to be reached until two months later.

Investors also looked to Washington, DC, where the debate began in the US Senate on the next proposed economic stimulus package. In some respects, however, the aid programme differs from the package of measures last approved by the House of Representatives. After an agreement, the corresponding bill can be presented to Biden for signature.

However, Fed Governor Lael Brainard’s statements contributed to additional easing: Yesterday, she assured that the US central bank would not reduce its support until the US economy was in a stable position again. Most recently, investors were again concerned about rising bond yields.

Economic data included the ADP labour market report and the Markit and ISM purchasing managers’ indices for the service sector. While the US private sector added fewer jobs than expected in February, business activity in the US service sector increased last month, but at a slower pace than the previous month. The Fed’s economic report contained no surprises, so there was no reaction on the stock market.

Despite negative economic data from the USA, Asian share prices moved upwards on Wednesday. Favourable economic data from Australia, where GDP in the fourth quarter developed better than expected, and from China, where the Caixin Purchasing Managers’ Index for the service sector fell only slightly and remains in the expansion-indicating territory, provided support.

Europe’s stock exchanges presented themselves with slightly rising prices in Wednesday trading. The EuroSTOXX 50 finally went into the evening 0.11 per cent stronger at 3,711.98 points.

There was a rollercoaster of emotions on the Frankfurt stock exchange today. Hopes of further political easing in the corona crisis initially brought the leading German index to a new record high of 14,197 points. However, a volatile trading day ended unspectacularly, and the DAX gained just a moderate 0.3 per cent and closed at 14,080 points. The TecDAX started somewhat stronger but then slipped deep into the loss zone. In the evening, the minus was 1.36 per cent at 3,318.94 index units.

Like the Asian markets, the European markets initially resisted the weak US sentiment.

The euro fell back below the 1.21 US dollar mark in Wall Street trading on Wednesday. In the afternoon, the euro cost only 1.2061 US dollars on the foreign exchange market.

After retesting the $50,000 round-mark, Bitcoin managed to break through this crucial resistance barrier thoroughly today. Intraday, the most popular cryptocurrency, gained 5.9 per cent to $51,500, while Ethereum rose 6.8 per cent to $1,614. Many other top-tier digital assets also gained traction again and increased in value. Double-digit gains were seen, for example, for VeChain, Filecoin, Luna, Atom, Algorand and most impressively Enjin with an intraday plus of over 30 and a 7-day-increase of over 110 per cent.

Corona protection measures caused service providers in Germany to post declines for the fifth month in a row in February and remain in the contraction zone. The Purchasing Managers’ Index (PMI) for the service sector fell to 45.7 points from 46.7 the previous month, the IHS Markit Institute reported in a second release.

Activity in the US service sector grew more slowly in February than in the previous month. The non-manufacturing Purchasing Managers’ Index, calculated by the Institute for Supply Management (ISM), fell to 55.3 from 58.7 last month. Economists surveyed by Dow Jones Newswires had forecast an unchanged reading of 58.7.

Employment in the US private sector rose more weakly than expected in February. As reported by the ADP, only 117,000 jobs were created compared to the previous month. Economists had predicted an increase of 225,000 jobs. In January, the bottom line was that 195,000 jobs were added, 21,000 more than initially reported.

According to a US Federal Reserve survey, the US economy grew moderately in most districts from January to mid-February. According to the Beige Book economic report, the reason for this was the increasing distribution of corona vaccines. Historically low mortgage rates have continued to lead to robust demand for new and existing homes in most districts, it said. Looking ahead to the next six to 12 months, most firms remained optimistic. Several districts expected general price increases in the coming months.

With the Beige Book, the US Federal Reserve prepares for its next meeting. The Fed is currently trying to quell all speculation about an early tapering of bond purchases. Before Congress, Fed President Jerome Powell stressed that the Fed is still far from its goals. A reduction in bond purchases would require “substantial progress”. Until then, it would still take “some time”. Therefore, no substantial monetary policy steps are expected for the meeting on 16 and 17 March.