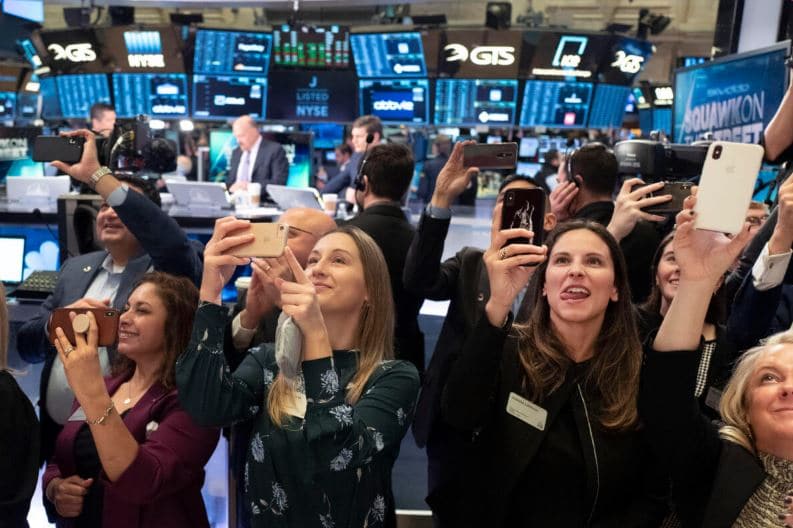 The stock markets continue to push forward as if there was no tomorrow or no more corona crisis. Those who currently think that the euphoria about a rapid economic recovery after the crisis cannot continue forever are clearly betting on the wrong horse. Because Dow Jones, S&P 500, Dax 30 and co. currently only know one direction – upwards and despite all the risks and warning signs.

The joy about the further loosening of corona restrictions and positive news about decreasing numbers of infections further boosted the good mood at many stock exchanges today, Tuesday. Risks are completely ignored. For example, Britain now has reported over 50,000 corona deaths.

Better than expected economic data from Europe and the US further supported the upward trend. However, although the worst losses in the labour market are likely to be a thing of the past with the reopening of many shops, offices and factories, economists still take a gloomy view: they estimate that about one in four employees who have been laid off or on leave since the lockdown in mid-March will probably not be reinstated. One reason for this is the expected wave of corporate bankruptcies.

Wall Street moved further north on today’s trading day. The US leading index, the Dow Jones, started at 25,906.88 points with a 0.64 per cent gain and then continued to expand. It ended today’s sessions with a plus of 2.05 per cent at 26,269.89 points. Meanwhile, technology investors remained somewhat more risk-averse: The NASDAQ Composite was able to increase by 0.78 per cent to 9,682.91 index points by the end of trading.

The riots surrounding the death of the African-American George Floyd had calmed down again. Besides, investors remained optimistic that the economy would quickly get back on its feet with the help of economic stimulus packages and financial stimuli from central banks. Also, the ADP labour market report came as a positive surprise: at 2.76 million, the decline in the number of jobs was significantly lower than the 8.75 million expected. The mood in the US service industry for May also rose more strongly than expected.

The rally in the US and Europe on Wednesday also boosted the Asian markets, and risk appetite was further increased.

The European markets continued to rush forward steeply today, Wednesday. The EuroSTOXX 50 increased by 3.5 per cent to 3,269.59 points by the end of the day.

“At the moment, the rally on the stock market does not seem to be wearing off at all,” said Deutsche Bank expert Jim Reid. At the same time, many market participants are currently counting on the European Central Bank to take additional measures to mitigate the consequences of the virus crisis in its interest rate meeting this Thursday. They were hoping for a significant expansion of the already 750 billion euro bond purchase program (PEPP). Meanwhile, the government’s deliberations on a major economic stimulus package, which began yesterday, have not yet led to a rapid agreement.

Continued optimism in the financial markets also helped to push the euro well above USD 1.12 on Wednesday. The euro was also able to maintain its high level in New York trading, ending the day at $1.1238.

Oil prices came under pressure on Wednesday after initial gains. Reports of a dispute between the central oil-producing countries over the fulfilment of production quotas weighed on the mood. North Sea Brent was last priced at $39.12, 45 cents less than the day before. The barrel price of the American variety West Texas Intermediate (WTI) fell by 42 cents to $36.39.

The price of gold is also weaker; one troy ounce of the precious metal is trading at $1,697.

At Airbus, the massive cutback in production due to the corona pandemic could, according to estimates from industry circles, result in a calculated surplus of about 14,000 employees. Meanwhile, the French-German aircraft manufacturer assumes that production – measured in terms of the workforce required – will remain 40 per cent below the level before the virus epidemic for two years, reports “Reuters”, citing insiders.

Currently, about 35,000 people are employed in production at Airbus. An insider also said that the development of output indicates that 15,000 to 20,000 jobs will be cut.

After the explosive growth in the corona crisis, the video conferencing service Zoom wants to become more firmly anchored in the lives of its users. This includes the plan to take over the telephone systems in more companies, as founder and boss Eric Yuan said after presenting current quarterly figures. Zoom recently recorded a jump in sales and profits – and also doubled its forecast for the current financial year.

In the 1st quarter of the fiscal year, which ended at the end of April, revenues rose from $122 million to $328 million year-on-year, the company announced after the close of the US stock market on Tuesday. The bottom line was a profit of around 27 million dollars – after only about $200,000 a year earlier. Investors, who have allowed the Zoom stock to rise from around 69 to 208 US dollars since the beginning of the year, reacted cautiously to the figures.

Internet giant Google must prepare itself for a possible class-action lawsuit in the USA worth at least five billion dollars for disregarding privacy settings. According to the complaint, which was filed in federal court in San Jose (California) on Tuesday, the company is supposed to collect data from internet users via Google Analytics, Google Ad Manager and other applications as well as website plug-ins and smartphone apps, even though they have set the settings to “private”.