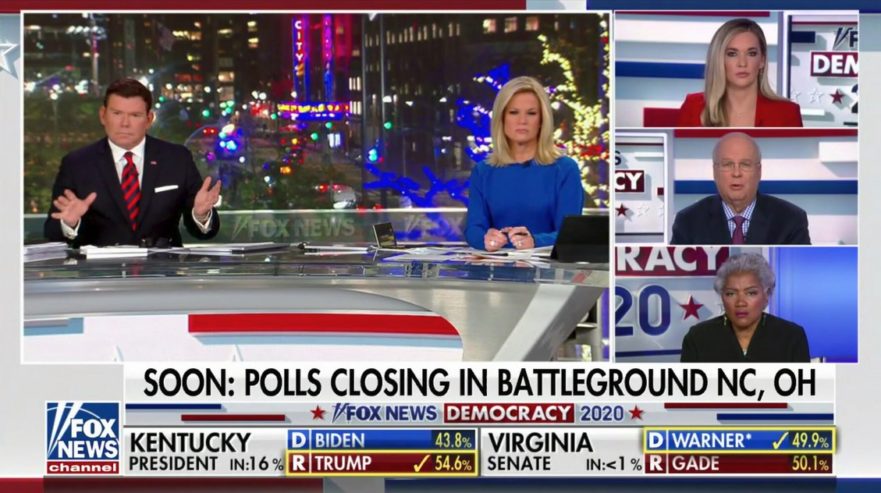 Oh what a night

Trump or Biden? It was and still is the thriller that many experts forecasted. In the USA, the worst possible scenario for the stock markets has actually occurred: a looming hanging game with a protracted election result. Even many hours after the last polling stations have closed, the race between incumbent Donald Trump and his challenger Joe Biden is still undecided.

As expected, uncertainty about the outcome of the US elections led to wild price fluctuations in the financial markets on Wednesday. In addition, the (still) incumbent President poured oil into the fire – also almost as expected – by declaring himself the winner early on and announcing that he would challenge the results if he lost.

Wall Street posted strong gains on Wednesday, betting on a Biden-win. The Dow Jones was able to increase its initial 0.12 per cent gain in the further course of trading and even exceeded the 28,000 point mark. In the end, it closed 1.34 per cent higher at 27,847.93 points. The technology-index NASDAQ Composite shot up by 3.85 per cent to 11,590.78 points, having already risen sharply at the start.

US President Donald Trump and his Democratic challenger Joe Biden are still in a neck-and-neck race with the White House. Even before the end of the vote count, the incumbent has declared himself the winner. If he is indeed confirmed in office, technology stocks are likely to benefit, as they would be less vulnerable to increased regulation.

However, many market participants are currently worried about a long hangover before a final election result is known. This uncertainty is typically a bad thing for the markets.

READ ALSO
Major Markets Event Today: What will the Fed do?

While investors were eagerly looking forward to the US, where the votes of the US presidential election were counted, the Asian indices were mostly up, anticipating a positive and smooth outcome.

European stock markets showed a clear upward trend on Wednesday. After a weak start, the EuroSTOXX 50 changed its sign several times and finally closed the day 1.8 per cent stronger at 3,156 points.

Investors on the European markets also looked to the USA with eager anticipation, awaiting the results of the presidential election. Hopes of a clear outcome do not appear to be coming true at present, however. While the polls in the run-up to the US elections still signalled a victory for Democratic challenger Joe Biden, a second term in office for US President Donald Trump cannot be ruled out at present.

The Forex market was also experiencing an up-and-down-hill ride today. Many currency-pairs fluctuated with wild swings as the votes for the US election were counted and updates released. The euro traded at 1.1723 US dollars in the evening.

On the oil market, there was a clear upward trend, with prices for North Sea oil Brent and the US grade WTI rising by over 3 per cent. The barrel of Brent oil is currently trading at 41.17 US dollars and the barrel of WTI at 39.13 US dollars.

The gold price went up and down as in forex trading. At the close of trading, the daily price was slightly lower at just under $1,900 an ounce.

The cryptocurrency space received a strong boost, following the stocks rally. Bitcoin skyrocketed by 4.6 per cent past the $14,000 mark, clearing the way for further gains. Ethereum also gained over 4 per cent to $402, while XRP and other so-called altcoins increased only slightly so far by round-about 1 per cent.

Little attention was paid today to economic data. The activity in the US services sector slowed down in October. The purchasing managers’ index of non-manufacturing industries, calculated by the Institute for Supply Management (ISM), fell to 56.6 (previous month: 57.8). Economists surveyed by Dow Jones Newswires had forecast a decline to just 57.5.

US companies created significantly fewer jobs than expected in October. As reported by the labor market service provider Automatic Data Processing Inc (ADP), only 365,000 jobs were created compared to the month of September. In contrast, analysts had predicted a plus of 600,000 jobs.

China’s services sector is accelerating its growth. The Caixin/Markit purchasing managers’ index published on Wednesday rose to 56.8 points in October from 54.8 in September, the sixth consecutive month. This was the highest level since June. The service sector accounts for around 60 per cent of economic output and for half of all jobs in the cities. Initially, the recovery of the economic sector lagged behind the upturn in the industry. But recently, business for service providers has been improving.

First loss in the history of Marks & Spencer

Lockdowns and business closures have left their mark. The British department shop chain has recorded the first loss in its 94-year history of stock exchanges because of the Corona crisis. The pre-tax loss in the first half of the financial year was £17.4 million compared with a profit of £176 million in the same period last year, the company said. However, analysts had predicted a loss of 59 million pounds. The Corona pandemic caused a slump in clothing sales in particular.

Today, the shares of Uber and Lyft are jumping up in double figures. The transport service providers can continue to contract their drivers as self-employed drivers in the US state of California. In a referendum held in parallel with the presidential election on Tuesday, voters in California, after counting 70 per cent of the votes, voted with 58 per cent in favour of a corresponding exemption, which, however, obliges the providers to provide additional services for the drivers. Uber and Lyft had threatened to withdraw from California in case of defeat.