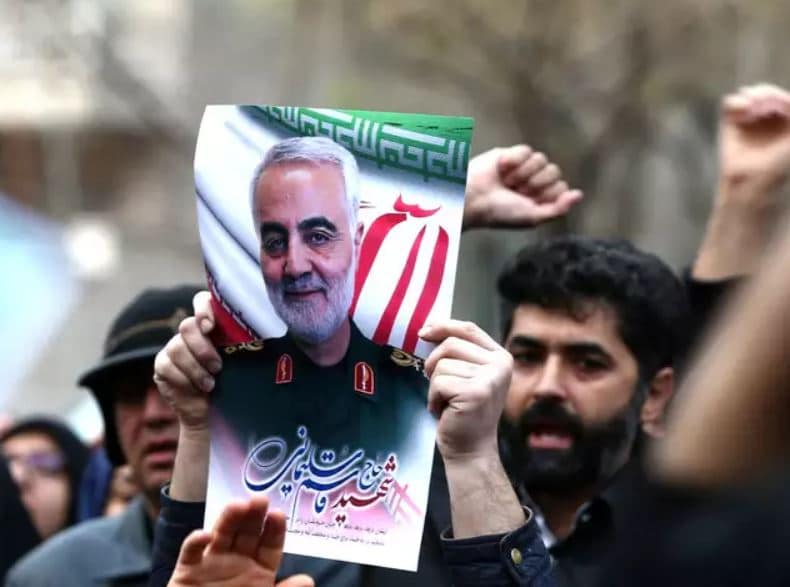 An Iranian retaliatory attack on US bases in Iraq on Wednesday morning again fuelled fears of further escalation and a possible new war in the Middle East. According to statements, however, the attacks were deliberate without any causality, and the USA did not react immediately with a hard counter-attack. On the contrary, US President Donald Trump de-escalated the situation in a highly anticipated evening.

He renounced a retaliatory strike against Iran after its missile attack from US installations but announced further economic sanctions against the country. At the same time, he referred to the great military and economic strength of the USA. This makes a negotiated solution possible for the time being. The markets reacted extremely positive to these signals after investors had sought for the typical safe havens in a crisis: gold, yen and the Swissy.

The Dow Jones opened Wednesday’s trading 0.10 per cent lower at 28,556.14 units and is now climbing into green territory. At its peak, the Dow rose to 28,810 points and finally closed with a plus of about 0.7 per cent at around 28,700 points. The NASDAQ Composite showed little movement at the start of trading with minus 0.01 per cent at 9,068.03 points, after which it climbed significantly into positive territory.

Major tailwind for Wall Street had also come from the labour market. The data from the private employment agency ADP for December underscores the extremely robust state of the American labour market. According to the data, 202,000 new jobs were created, while experts had expected only a rise of 160,000.

Asian stock markets went down in the middle of the week.

Tensions in the Middle East and the fear of a further escalation once again weighed on the Asian markets. On Thursday morning, however, the markets are expected to recover after the positive developments and Trump’s speech.

On Europe’s stock markets, the initial heavy losses were shaken off on Wednesday.

The EuroSTOXX 50 started lower and initially also moved in red territory. In the day, however, it left the loss zone and traded higher. In the end, the EuroSTOXX 50 gained 0.35 per cent to 3,772.56 index points. The Dax finally ended the volatile trading session at 13,320 points, a daily gain of 0.71 per cent. In the morning low of the day, the index had dropped to 13,000 points, and the daily high was reached at 13,334 points.

The euro was burdened by weak order data from German industry, among other things. In November, orders to this sector, which is vital for the German economy, had declined significantly. In particular, fewer orders came from outside of Europe. Bank economists were disappointed and spoke of continued industrial weakness. The American dollar received a tailwind from robust data from the US labour market. This put additional pressure on the euro.

Oil prices have lost initial gains, and after President Trump’s speech have turned more clearly into minus. The North Sea Brent crude fell by 4.2 per cent to 65.39 dollars per barrel, while US light oil WTI cost around 5.0 per cent less at 59.58 dollars per barrel.

The price of gold also fell sharply to 1,556 dollars per troy ounce. It had previously marked a new seven-year high at 1,610 dollars when investors started to seek safe havens.

Cryptocurrencies lost some traction on Wednesday. Bitcoin started off with gains to $8,350 but then lost all its gains and even ended the trading day with a loss of over 1 per cent at $8,000. Ethereum lost approximately 3 per cent and fell to $139 while XRP had to cop further losses of over 3 per cent to $0.2060.

With the billion-dollar acquisition, PayPal has secured Honey’s customer base of 17 million monthly users and the company’s bonus platform. This will provide the payment service provider’s corporate customers with simple and integrated options for offering discounts and vouchers to their customers.

Adidas shares rose above 300 euros on Wednesday for the first time in their stock market history. They left behind the previous record high of €296.75 at the beginning of August 2019. The share closed at the record high of 302.85 euros.

The shares of the sporting goods and lifestyle group thus continued the upward trend of Tuesday. The company had announced the day before the start of the third tranche of a share buyback this year worth up to one billion euros.

Hi-fi specialist Sonos, a pioneer in networked speakers in the home, is taking on Google. The company accuses the internet company of patent infringement in a lawsuit. Sonos emphasized that Google obtained information about Sonos technology while working together to integrate its music service – and then infringed the patents with its own devices since 2015. A Google spokesman rejected the accusation, telling the New York Times that the companies had been talking about the issue for years.

Sonos is specifically targeting Google’s Chromecast Audio device, which allows you to network speakers in different rooms, in a lawsuit filed in California on Tuesday. The patents deal with exclusive technologies for the interaction of several speakers, for example, when it comes to adjusting the volume or synchronizing music playback.