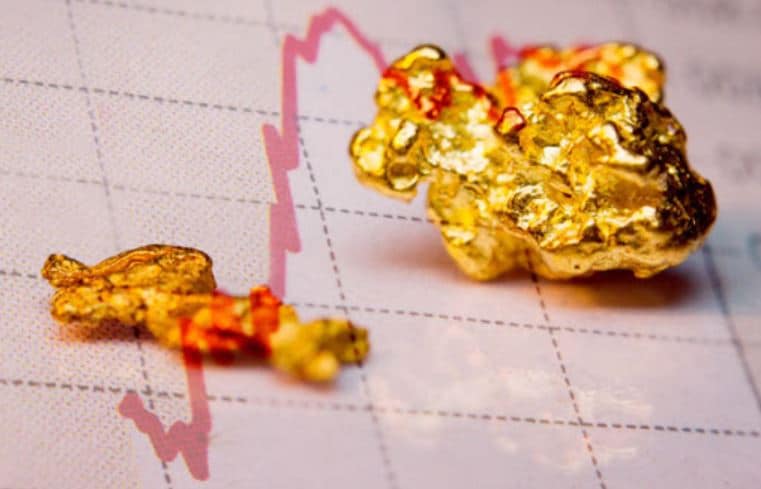 The narrative in the financial markets continues to build around the appreciation of the precious metal gold. The precious yellow metal crossed the $1,800 mark today and manages to hold steady above this important psychological mark.

No doubt, many market experts had long anticipated the current gold rush, especially since the intense money flood provided by almost every central bank on the planet of the past few months. Their seemingly unlimited money-printing policies signal to many investors to allocate more funds into safe-havens such as gold. But also other precious metals like silver and digital assets are getting more and more interesting to traders, money and portfolio managers but also the average joe, money-smart investor. More and more people start realizing that this “new world order” and the apparent coming of a “financial reset” are more than just conspiracy theories or intellectual concepts.

Nevertheless, today’s trading day was characterised by partly massive price fluctuations. As the economic calendar was almost empty, traders focused virtually exclusively on corona-related factors and media releases. Investors looked with great concern at the progress of the crisis in the USA. On the other hand, stock market bulls continued to put their money entirely on the economic recovery card, not least because of the seemingly never-ending stream of liquidity from the central banks.

The US markets on Wednesday were caught between ever-increasing new corona infections and positive statements from Fed members. The head of the St. Louis-Fed, James Bullard, made it clear that the US economy is already back on the right path. Also, the Federal Reserve Banker sees the unemployment rate at the end of the current year already back in the single-digit range.

The quasi-call to buy shares, which was widely reported in the Chinese state media at the beginning of the week, probably had a further impact. The fact that the Central Bank of Malaysia had lowered its key interest rate to a record low on the previous day to support the economy was also received positively.

European markets posted losses on Wednesday. The EuroSTOXX 50 started 0.32 per cent lower at 3,310.83 points and was also in red territory afterwards. At today’s close, a minus of 1.07 per cent at 3,286.09 index units remained on the price board.

Already the previous day, the stock markets made a setback, and on Wednesday this consolidation continued. Attention was paid to statements by Fed Vice Chairman Richard Clarida that the further development of the US economy depends solely on the corona crisis and that the rising infection figures are being watched with concern.

On the foreign exchange market (Forex), both the euro and the commodity currencies CAD and AUD made significant gains against the US dollar. At the end of trading on Wall Street, the common currency, the euro, is traded at $1.1337. In Asian and European business, the euro was still quoted well below $1.13.

On the commodity market, however, oil prices have fallen somewhat. In the afternoon, a barrel (159 litres) of North Sea Brent was traded for $42.94 – 13 cents less than on Tuesday. The price for the American variety West Texas Intermediate (WTI) fell by 14 cents to $40.48.

For the first time since 2011, the price of gold today rose above the $1,800 mark. Credit Suisse sees the price moving up to 1,850 US dollars per troy ounce, and Goldman Sachs is even more optimistic. The US investment bank believes that the gold price is reaching a record high of $2,000 per troy ounce in the current economic environment.

The digital asset class also continues the appreciate handsomely, whereby numerous so-called altcoins further outperform the best-known cryptocurrencies Bitcoin and Ethereum. Today, Bitcoin gained 1.3 per cent to $9,400, while Ethereum gained 2.7 per cent to $246. XRP, the digital asset mostly utilised by the San Francisco based Fintech company Ripple, rose by 2.9 per cent to $0.2040 on the daily, securing a 15+ per cent appreciation over the past seven days. The biggest gainer of the most valuable cryptocurrencies was XRP rival Stellar Lumens with a daily gain of 20.5 per cent to now $0.0920.

The new free trade agreement for North America has been in force for a week. The deal, known as the USMCA, replaces the 1994 NAFTA pact and affects almost 500 million people in the USA, Mexico and Canada. Starting today, US President Donald Trump and his Mexican counterpart Andrés Manuel López Obrador will meet. Canada’s Prime Minister Justin Trudeau will not attend the meeting as he will be in Ottawa for parliamentary and cabinet meetings, Canadian media quoted a spokeswoman as saying.

Europe’s largest household appliance manufacturer expects a lower operating loss in the second quarter than feared. The reasons are increased demand and cost reductions. The board of directors, therefore, assumes a minus of about 100 million crowns (9.6 million euros) after a profit of 1.22 billion Swedish Crowns last year. The Swedish rival of the US-American Whirlpool had warned in May of a substantial loss due to the effects of the corona crisis, after sales had slumped by 30 percent in April.

Apple and Amazon reached new record levels this Wednesday. On Tuesday, other well-known company shares had joined the record runners: Microsoft, Tesla and Google’s Alphabet mother. Also, the software and Photoshop provider Adobe, as well as Facebook and Netflix.

Apple took second place in the Dow on Wednesday at the closing bell with an increase of 2.3 per cent to $381.37. The market value of the entire company now amounts to 1.65 trillion US dollars, making it the second most valuable company in the world after Saudi Aramco. For comparison, all 30 companies in Germany’s leading index Dax together have a market value of the equivalent of around 1.4 trillion US dollars.

The Amazon share, which on Monday broke through the $3,000 barrier for the first time, rose to $3,083.85 on Wednesday and is now worth around 1.54 trillion US dollars. The shares of Microsoft in the Dow or Alphabet and Netflix in the NASDAQ 100 also rose further as well. In terms of market value, Microsoft is close behind Apple with 1.61 trillion US dollars.

The shares of corona winner Zoom Video Communications, which had reached a record high of just over $275 on Monday, were also trading slightly below that level today.