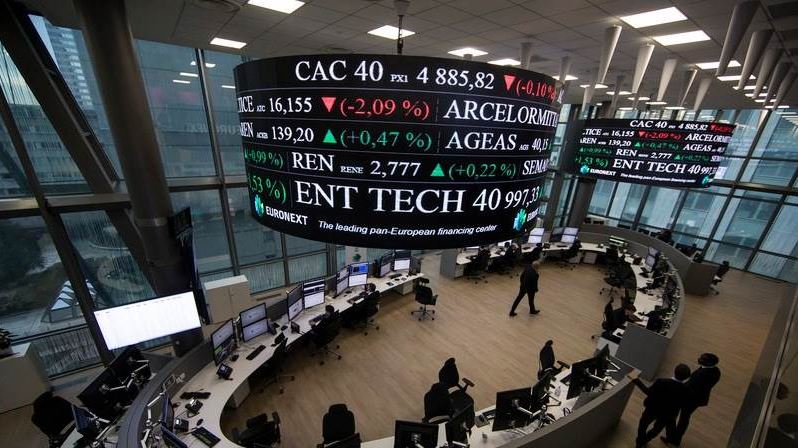 All eyes on Trade Talks

Hopes for a speedy agreement in the trade dispute have been dampened considerably in recent days. On Tuesday, the US blacklisted 28 Chinese companies and government organizations and imposed visa restrictions for their actions against the Uighurs and other Muslim minorities. Beijing strongly condemned these steps as interference in China’s internal affairs.

To make matters worse, the approaching deadline for Brexit and the possible impeachment of US President Trump increase the risk of a major correction in the stock markets.

Seasonality is also not on the side of the stock market bulls, as falling prices statistically characterize October on average.

US futures are picking up around midday. The future on the leading index, the Dow Jones Industrial Average, is 0.7 per cent higher at the hour.

The question of the sustainability of today’s rise nevertheless arises. After all, the (geo)political uncertainties have not diminished by the middle of the week.

By the middle of the week, the mood on Asian stock markets was mixed.

The positive mood before the trade talks was replaced by pessimism. In particular, the focus was on new US sanctions for alleged Chinese human rights violations in the Muslim region of Xinjian. Besides, the USA apparently considered restricting or even banning the flow of US capital. The smouldering trade dispute thus continued not to cool down.

The European stock markets start slightly firmer on Wednesday. The EuroSTOXX 50 barely moved to the sound of the starting bell and the same counts for the German DAX30.

Investors are eagerly awaiting the minutes of the Fed meeting in the evening. Investors are hoping for indications as to whether and when the US Federal Reserve will cut the key interest rate further. Meanwhile, there seems to be not much progress on Brexit.

During the Asian currency trading session, the euro rose by 0.1 per cent to 1.0961 dollars.

Meanwhile, the sudden risk-on movement is making itself felt on the commodity markets: Oil prices are rising sharply, the US grade WTI is rising to over 53 dollars a barrel, and the North Sea grade is rising to a good 58 dollars.

On the other hand, the “safe haven” gold is not in demand in such an environment. The gold price turned negative at noon and lost 0.1 per cent to just under 1,504 dollars per troy ounce.

The cryptocurrency market remains stable at an overall market cap of approximately $222 billion. None of the major digital assets moved in any significant manner so far today.

The Euro finance ministers will discuss the controversial Eurozone budget in Luxembourg today from 1 p.m. onwards. The meeting, which is also expected to be attended by Federal Finance Minister Olaf Scholz (SPD), is expected to see far-reaching progress. An agreement could be reached during the night, it was said in advance.

The Eurozone budget originally belonged to the European visions of French President Emmanuel Macron. In 2017 he advocated a multi-billion-euro budget exclusively for the euro states. For him, the budget was a symbol of a major breakthrough for the EU. The common currency area should also be better protected against future financial crises.

The US technology group is criticized in the newspaper of the Communist Party of China. The paper complains about the approval of a certain app on Apple devices, which follows the police movement in Hong Kong and is used by protesters during the anti-government demonstrations. The app “HKmap.live” opens the door to violent demonstrators in the Chinese special administrative zone, the newspaper says.

According to Turkey, it will soon march into northern Syria to take action against the Kurdish militia. The offensive is imminent, wrote President Erdogan’s communications director Altun. The Istanbul stock market turned negative this morning, and the Turkish lira continued to fall. US President Trump threatens Turkey with economic destruction if the troops in Syria misbehave.

The US pharmaceutical company Johnson & Johnson has been sentenced to pay billions in damages. A jury in Pennsylvania on Tuesday ruled that J&J had to pay eight billion dollars for lack of information about the side effects of a schizophrenic drug.

The lawsuit was brought by a man taking the psychotropic drug Risperdal, which is prescribed for schizophrenia and bipolar disorders. He accuses the pharmaceutical company of having grown breasts as a result. J&J immediately announced that they would appeal. The J&J share falls by around two per cent.

Lufthansa wants to save Alitalia

According to an insider, the German Lufthansa intends to participate in the rescue of the Italian airline Alitalia. This is what the leading European airline has proposed to the Italian government, said a person familiar with the matter. The state-owned railway company Ferrovie dello Stato, the US airline Delta and the Italian infrastructure group Atlantia have been negotiating a rescue plan for Alitalia for months. A binding offer is to be submitted by 15 October.