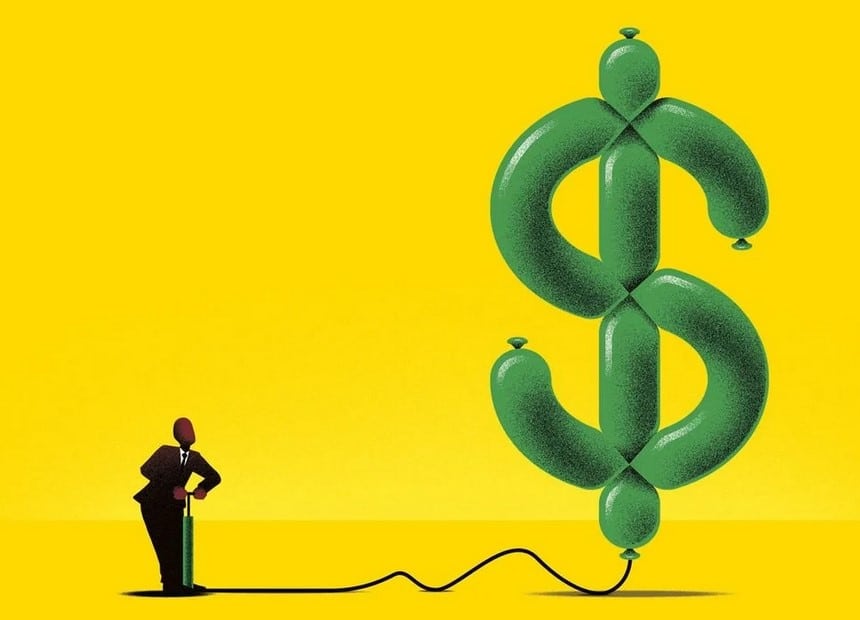 Consumer prices in the United States rose by 5.4 per cent, compared to the expected average increase of 5.3 per cent. This means that prices remain at a high level but will not continue to rise for the time being. The core rate, i.e. the price development excluding the volatile energy and food prices, was exactly in line with expectations at plus 4.3 per cent. This must have taken a load off many an investors’ minds today, as worse had been secretly thought possible with the price data.

The US leading index DOJ continued its record run on Wednesday, but the Nasdaq was unable to follow.

The Dow Jones opened with a slight gain, then increased it further and reached a new all-time high of 35,501.16 points. It finally ended the day 0.62 per cent higher at 35,484.90 points. The NASDAQ Composite didn’t fair as well and even slipped into the red after starting the session higher. It ended the session 0.16 per cent weaker at 14,765.14 index units.

Investors had greeted with relief the stagnation of the annual US inflation rate at a high level of 5.4 per cent. The pressure on the US Federal Reserve (Fed) to act has thus not increased further, but it has not decreased either.

Confidence prevailed on the Asian stock exchanges in the middle of the week, and the indices continued to go up. The Japanese benchmark index Nikkei climbed by 0.65 per cent to 28,070.51 points. On the Chinese mainland, the Shanghai Composite rose 0.08 per cent to 3,532.62 points, while the Hang Seng gained 0.20 per cent to 26,660.16 units in Hong Kong.

The sentiment was slightly weighed down because the press pushed the corona crisis again in Asia. South Korea, for example, reported a record number of new infections. Investors were also cautious ahead of the publication of the latest US inflation data. Nevertheless, Japanese shares were particularly in demand today, Wednesday.

European markets traded mainly friendly and the EuroSTOXX 50 gained 0.44 per cent to 4,206.33 points. At times, it surpassed its high for the year, which it had reached only the day before.

After a friendly start, the DAX temporarily fell into negative territory before rebounding and ending 0.35 per cent firmer at 15,826.09 points with a new record closing price. In the process, the German benchmark index even climbed to a new record high of 15,887.16 points after the latest US inflation data. In contrast, the TecDAX closed 0.69 per cent lower at 3,812.92 units, although it had opened with a small gain in the morning.

In addition to the view of the USA, the continuation of the reporting season for the second quarter was on the agenda for domestic investors. In addition to DAX member E.ON, several second-tier companies also opened their books today. The DAX leader was Munich Re, where the good figures from the previous day were still having an impact.

On the foreign exchange market, the euro gained after the US price data and was traded almost 0.2 per cent higher at 1.1741 dollars in US business. US interest rate fears had recently put the common currency under pressure and caused it to fall to just below the 1.17 dollar mark.

The US business channel CNBC reported that the US government wants to ask the member states of the oil alliance Opec+ to increase production. The most recently agreed expansion of production by Opec together with allied oil states such as Russia was not sufficient, the report said, citing statements from the US government. The statements put some pressure on oil prices, but the price fluctuations remained within limits—North Sea Brent last cost 70.01 US dollars per barrel, 62 cents less than the previous day. The price for a barrel of WTI fell by 55 cents to 67.75 dollars.

The gold price was supported today by the US inflation data as it weighed on the greenback. The price of a troy ounce of the precious yellow metal closed at $1.752, almost $30 more than the previous day.

Inflationary pressures in Germany, as measured by the Harmonised Index of Consumer Prices (HICP), increased significantly in July. As the Federal Statistical Office (Destatis) announced, the HICP annual rate rose to 3.1 (previous month: 2.1) per cent. This is the highest value since August 2008. The statisticians thus confirmed – as expected by economists – their preliminary estimate of 29 July. A base effect mainly triggered the rise in inflation due to the corona-related reduction in VAT rates in July 2020. The previous rates have applied again since January 2021. At the same time, other price effects such as the CO2 price and usual market developments had an impact, the statisticians explained. Compared to the previous month, the HICP rose by 0.5 per cent, confirming the preliminary data. The HICP rate is decisive for the monetary policy of the European Central Bank (ECB).

Inflation in the US remained high in July. The annual inflation rate remained at 5.4 per cent while the economic recovery gained momentum. The US Department of Labour reported that consumer prices rose 0.5 per cent from the previous month. The 0.9 per cent price increase reported for June was confirmed. Economists had expected a rate of 5.3 per cent for annual inflation in July.

Real income in the USA fell by 0.1 per cent in July compared to the previous month. In June, a decline of 0.5 per cent had been recorded. As published by the US Department of Labour, the average weekly income in July was 390.35 US dollars, seasonally and inflation-adjusted, after 390.79 dollars in the previous month.