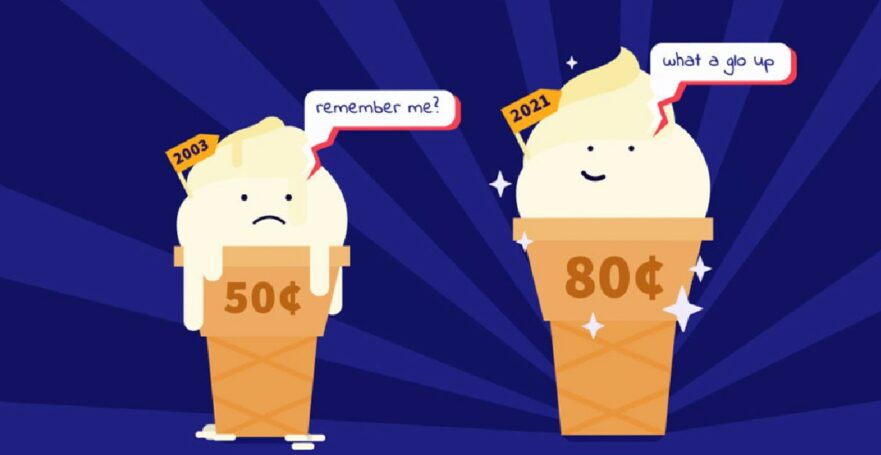 Over four per cent inflation in the USA! Hardly any economist had expected such an increase. The latest CPI figures from the USA clearly show a brutal truth. Wall Street was deeply shocked, and share prices plummeted. Only Europe’s stock markets resisted the downward trend – at least for today.

The billions in economic stimulus from the government and the Federal Reserve, easing the consumer backlog and chip bottlenecks in the industry, caused a sharp rise in inflation in the USA in April. Consumer prices rose by 4.2 per cent – after plus 2.6 per cent in March. Experts had only expected an increase of 3.6 per cent. This means that inflation concerns are now once again in the minds of many investors. It remains to be seen if the Fed will immediately tighten the reins and stop the financial boon. For the time being, the monetary authorities tried to calm the mood. They did not really succeed today.

The US stock markets went steeply downhill on Wednesday. Both the Dow Jones and the NASDAQ fell into the basement. The Dow Jones started the session slightly lower and steadily extended its losses. In the end, the US leading index fell by 1.99 per cent to 33,587.66 points. The NASDAQ Composite already started deep in the loss zone and remained there. It closed 2.67 per cent lower at 13,031.68 points.

US consumer prices rose as strongly in April as they last did in September 2008, and US inflation broke the 4 per cent barrier in the month. This weighed heavily on the US stock markets: in the medium and long term, the question is whether the combined monetary and fiscal stimulus will remain without lasting consequences for price development. The central banks do not yet see themselves under pressure and consider the driving factors to be temporary.

A combination of inflation concerns and the corona crisis already weighed heavily on sentiment on Tuesday. There was no calm on Wednesday either. Inflation and corona concerns continued to weigh on the regional markets, mainly because the situation in India isn’t getting any better. In the USA, the publication of consumer prices for April was on the agenda during the day, but investors were very unsettled in the run-up after the close of the Asian markets.

In addition to the disastrous corona situation in India, the focus has now shifted to Taiwan. This brings the corona crisis dangerously close to the Chinese heartland, where investors were still relatively relaxed.

Furthermore, the conflict between Israel and Hamas in the Gaza strip is heating up further, adding another worrying factor to the mix.

The European stock markets were also unsettled on Wednesday but still managed to make slight gains. The EuroSTOXX 50 started almost unchanged and ended the trading session 0.03 per cent up at 3,947.43 points.

The accounting season in Germany continued at a rapid pace in the middle of the week. Before the Ascension Day holiday on Thursday, a large number of companies presented their quarterly figures, including Merck, Allianz, RWE, Deutsche Telekom and Bayer from the DAX. On the German stock market, the results mainly were positively received, which also supported the DAX.

Inflation concerns remained the number one burdening topic. On Wednesday, the associated worries about rising interest rates came back into focus as price data were published in the USA in the afternoon. US consumer inflation was much higher than expected. As a reaction, long-term US bonds immediately jumped upwards.

The surprisingly high inflation and the newly awakened interest rate fantasy in the USA drove the greenback on the foreign exchange market. The euro fell below 1.21 US dollars and was trading at only 1.2072 dollars in the evening.

In the USA, crude oil inventories fell last week to their lowest level since the end of February. Compared to the previous week, stocks fell by 0.4 million barrels to 484.7 million barrels. Previously, the International Energy Agency (IEA) had reported that excess crude oil inventories worldwide had dropped sharply compared to the previous year. Under these conditions, oil prices were able to rise today. North Sea Brent crude rose by 1.08 dollars to 69.62 US dollars per barrel. WTI oil from the USA increased by 1.04 dollars to 66.31 dollars.

After the presentation of the US CPI figures, gold dropped sharply as the US dollars appreciated from investors fleeing into the reserve currency. By the end of trading on the NYSE, the precious yellow metal traded at $1,815, down more than 22 dollars on the day.

Similarly, cryptocurrencies came under pressure in the US session after rallying during the Asian session. One factor was the rising US dollar, but the main trigger for the large sell-off in Bitcoin, and subsequently altcoins as well, was that Elon Musk tweeted out that Tesla would stop accepting BTC payments because of the high energy demand of Bitcoin mining. Bitcoin shed 12 per cent in only minutes to the $50,000 round-mark. Ethereum held much stronger and only lost 5 per cent to $3,989. Earlier in the day, Ether had reached a new record-high at $4,360. On the other hand, many altcoins suffered heavy losses, dropping between 7 and 30 per cent in tandem with BTC. For example, XRP decreased by 11 per cent to $1.34, Cardano gave up 7 per cent to $1.64, and Bitcoin Cash fell by over 16 per cent to $1,313. Shiba Inu, the self-proclaimed “DOGE killer”, fell from the sky and lost over 30 per cent to $0.00002126.

The British economy shrank at the beginning of the year. Economic output (GDP) fell by 1.5 per cent in the first quarter of the current year compared to the previous quarter, the statistics office ONS announced in London on Wednesday. Analysts had expected a decline of 1.6 per cent on average. The decline follows a 1.3 per cent rise in GDP in the final quarter of 2020.

Above-average increases in energy prices drove inflation in Germany to its highest level in two years in April. The Federal Statistical Office calculated an annual inflation rate of 2.0 per cent for the month. The Wiesbaden-based authority thus confirmed preliminary data on Wednesday. The last time there was such a high rate in April 2019. Since the temporary VAT cut expiry at the end of 2020, consumer prices have thus risen for the fourth month in a row.

Industry in the eurozone increased its production only minimally in March. According to Eurostat, the statistics authority, production (excluding construction) rose by 0.1 per cent compared to the previous month, seasonally adjusted. Economists surveyed by Dow Jones Newswires had expected a more substantial increase of 0.7 per cent.

In the USA, real income rose by 0.2 per cent in April compared to last month. As the US Department of Labour reported, an increase of 0.1 per cent was recorded in March. According to the agency’s data, the average weekly income in April was 395.74 US dollars, seasonally and inflation-adjusted, after 394.87 dollars in the previous month.

In April, price inflation in the US jumped as the economic recovery and supply disruptions drove up prices for goods and services. The US Department of Labour reported that consumer prices rose 0.8 per cent from the previous month. Economists surveyed by Dow Jones Newswires had expected an increase of only 0.2 per cent. This raised annual inflation to 4.2 (previous month: 2.6) per cent. This is the highest rate of inflation increase since September 2008. Economists had only expected 3.6 per cent.