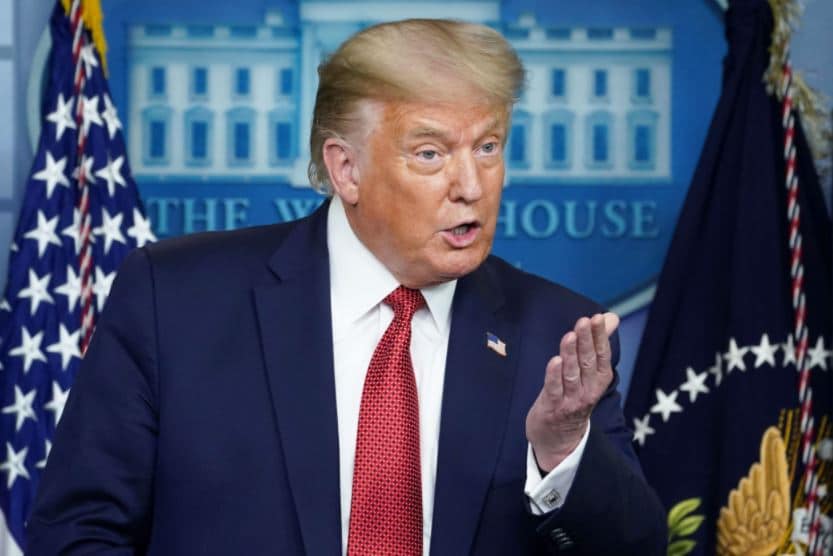 Hopes for a new stimulus package in the US and robust economic data from the EU have once again triggered investors’ risk appetite, putting heavy pressure on traditional safe havens like gold or the Japanese yen.

Investors are firmly (and deliriously?) expecting a sharp economic recovery and are leaving the safe haven to buy, especially in the last few days, the shares that they had previously deemed “crisis losers”.

However, this could have fatal consequences because a new US economic stimulus package is still far from being agreed on and sanctioned. The talks are stuck in a dead-end, which probably triggered the profit-taking the day before. Most recently, representatives of the US Federal Reserve Bank put pressure on the government parties to reach an agreement.

Wall Street again presented itself in a friendly manner today.

At the opening, the Dow Jones was already trading higher and ended at 27,976.84 points, which was equivalent to a 1.05 per cent increase. The tech stocks index NASDAQ Composite posted substantial gains of 2.13 per cent to 11,012.24 points with the big tech companies giving the biggest boost, contributing more than 40 per cent of the total increase in stock index values.

Declining new corona infection figures in the USA had a supporting effect. However, the main topic of discussion remained the difficult negotiations between Republicans and Democrats on a new US economic stimulus programme. Most market participants firmly expect an agreement to be reached in this regard. They are therefore once again fuelling the risk-on environment, especially since representatives of the US Federal Reserve have now also put pressure on the two parties to reach an agreement. “If there is no agreement, rapid correction of the markets can be expected,” analyst Nicholas Brooks of Intermediate Capital Group commented to dpa. The surprisingly sharp rise in US consumer prices in July further supported risk appetite.

The mood on the stock exchanges in Asia was mixed on Wednesday. In Tokyo, the Nikkei was up 0.41 per cent to 22,843.96 points at the end of trading. Here the weaker yen supported the prices against the generally negative trend in the Far East.

On the Chinese mainland, the Shanghai Composite ultimately lost 0.63 per cent to 3,273.75 index points, while the Hang Seng in Hong Kong was able to shake off its losses and climbed 1.42 per cent to 25,244.02 points by session close.

The impasse regarding the US economic stimulus package also weighed on investor sentiment in Asia. The continuing tensions between China and the USA also had a negative effect. The level of new bank loans, which fell in July, was also disappointing.

Europe’s markets once again posted significant gains. Although the EuroSTOXX 50 had started lower, by the end of trading, it had turned positive and gained 0.93 per cent on the day to 3,363.18 points.

The Dax 30 was able to work its way into the profit zone after an initial weak start and ended the session 0.86 per cent stronger at 13,058.63 points. The leading index also briefly broke through the 13,100 mark. The TecDAX also managed to shake off its early losses and closed 0.75 per cent higher at 3,104.32 index units.

The 9.1 per cent increase in industrial production in the eurozone in June was well received. Although the rise was marginally smaller than expected, the data still signalled recovery.

Support also came from Wall Street and especially the tech sector. Inflation in the US has risen sharply according to recent data, which could put pressure on the Fed. The stalemate in the US between Democrats and Republicans over the stimulus package and the tensions between the world’s largest economy and China also remained in investor focus.

In the Forex market, the euro was able to strengthen again today, climbing to over $1.18 against the US dollar. At the close of trading in Frankfurt, however, the common currency was trading below this level again, at $1.1789.

Thanks to a surprisingly sharp drop in US inventories, the price of US WTI rose by almost 2 per cent to 42.37 US dollars per barrel (159 litres). North Sea Brent was traded at 45.36 US dollars, 82 cents more than the previous day.

The cryptocurrency market stabilized today with ChainLink outperforming the rest of the leading pack once again, staging an impressive 32.5 per cent gain on the day to $17.55. Bitcoin increased by 1.9 per cent to $11,590, while Ethereum rose 6.4 per cent to $397. XRP also gained a solid 2 per cent to $0.2880.

Freenet’s shares will receive a strong tailwind on Wednesday from an offer for the Swiss investment Sunrise. The US cable company Liberty Global wants to pay 110 Swiss francs per share, and Freenet intends to tender its 24 per cent stake in full. The Sunrise shares had closed trading the previous day at 86.20 Swiss francs, so the offer represents a 27 per cent premium. With 45.3 million shares outstanding, Freenet could collect a price of around 1.2 billion francs for the share package. The telecom and internet company announced that it intends to use a large portion of the funds released to reduce its debts.

Given the insolvency of Dax member Wirecard, Deutsche Börse revised its rules and regulations following consultation of market participants. According to the new rules, insolvent companies will now be removed from the Dax selection indices (Dax, MDax, SDax and TecDax) with a notice period of two trading days, Deutsche Börse announced the rule change adopted by the index subsidiary Stoxx Ltd. on Wednesday evening. It will come into force on Thursday, 19 August.

The resulting changes in the composition of the Dax and TecDax will be announced accordingly on the same evening after 10 p.m. and implemented after the close of trading on Friday, 21 August. The calculation is based on the ranking list of 31 July and other specifications from the rules and regulations.

Fed banker does not expect a rapid revival of economic activity

According to a high-ranking member of the US Federal Reserve, the slowdown in economic activity in the USA will probably continue. The states took more measures to contain the coronavirus, and consumers remained cautious, said the president of the Boston branch of the Federal Reserve, Eric Rosengren, on Wednesday according to the speech text. “The forecast for the US economy this fall is quite uncertain,” he said. “But in my view, the recent slowdown in economic activity that we’ve seen in radio frequency data is likely to continue.”

Areas of the country that decided on longer lockdowns early in the crisis are now benefiting from better health conditions and more robust consumer spending, Rosengren said. In states where restrictions were quickly lifted, economic activity did pick up briefly, but the government has been able to take the necessary steps to improve the situation. However, it was then again dampened by rising infection rates. Rosengren also warned that insufficient measures to control the virus were exposing citizens to unnecessary risks. “This is likely to prolong the economic downturn.”

Now is the time for strong fiscal measures, Rosengren said. But these must be accompanied by measures to contain the virus. “If you really want to make sure the debt doesn’t explode, you have to make sure you get the pandemic under control.”