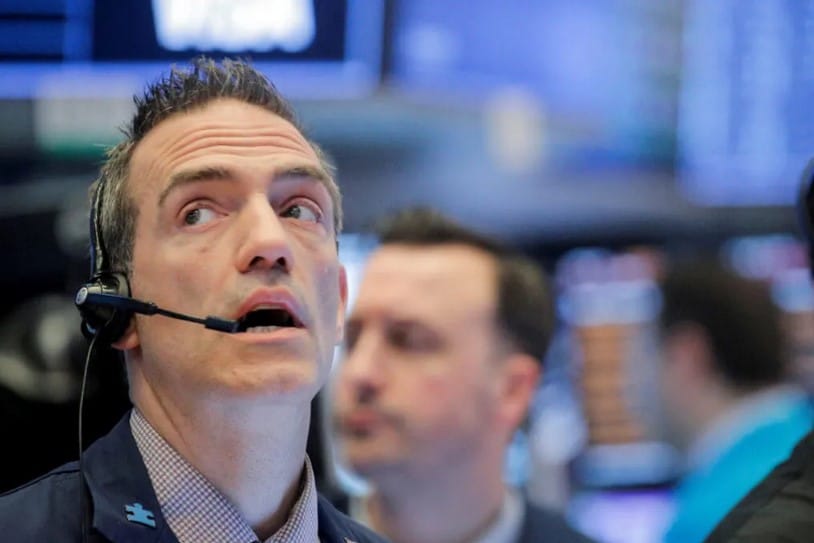 Before the start of the next reporting season on Friday with figures from the banking sector, investors remain cautious and keep their powder dry, at least in the case of blue-chip stocks. Investors are increasingly asking themselves whether the earnings reports can justify the high prices. Recently, investors on the stock market have also been keeping a wary eye on the development of bond yields, which are currently on the rise.

Currently, the market is mainly driven by the prospect of a billion-dollar aid programme from the new Biden administration. No investor wants to miss the train. After all, up to 1.3 trillion dollars in government aid is on the cards, and even corona fears and lockdowns are receding into the background.

Traders on Wall Street were hesitant on Wednesday. The Dow Jones Industrial remained at its opening level for most of the day, closing marginally lower by 0.03 per cent at 31,060.47 points. In contrast, the NASDAQ Composite gained 0.43 per cent to 13,128.95 index points after starting the day with only a small gain.

In the middle of the week, investors focused on several economic data from the US and Europe. Meanwhile, statements by US central bankers had a dampening effect. Some Fed officials spoke out against an early discussion of the Fed tapering its bond purchases. The upcoming reporting season also made investors act cautiously.

The European stock exchanges did not dare to make any great leaps in the middle of the week but were able to record slight gains. The EuroSTOXX 50 gained 0.12 per cent to 3,616.51 index points.

Investors in Europe will remain on the defensive on Wednesday. The reporting season, which starts on Friday, should bring a little more movement. Besides, the main focus of stock market participants remains on the Corona pandemic and the political unrest in the USA surrounding the impeachment of President Donald Trump.

The euro exchange rate was under pressure again today. The common currency fell to 1.2155 US dollars on the forex market. The greenback is currently benefiting from developments on the bond market, where yields on American government bonds have recently risen significantly.

Oil prices were unable to hold onto early gains from Asian and European business on Wednesday. In the evening, prices were clearly in the red, with a barrel of North Sea oil trading 61 cents lower at 55.97 US dollars. West Texas Intermediate (WTI) oil prices also fell to 52.88 US dollars per barrel in the evening. Despite the losses, oil prices are near their highest level since the first Corona wave in spring 2020.

Although gold seemed predestined for another bullish move from a technical analysis perspective, the price fell from $1,855 to $1,848 an ounce during the day.

The cryptocurrency market added more than 120 billion US dollars in overall market cap today and jumped back above the $1 trillion mark. The Bitcoin price increased by over 10 per cent to $37,300, while Ethereum gained 5.7 per cent to $1,105 and Polkadot soaring by 37 per cent to $11.40. XRP remained almost unmoved around the $0.2920 mark.

In December, inflation in the USA picked up with consumer prices rising by 0.4 per cent compared to the previous month. Economists surveyed by Dow Jones Newswires had expected an increase of this magnitude. The 0.2 per cent price increase reported for November was confirmed. In the meantime, the Fed is pursuing a flexible inflation target: In future, price increases may be higher than 2 per cent for a while if they have previously been below this level for an extended period.

The recovery of the industry in the eurozone from the corona crisis made far greater progress than expected in November. Companies produced 2.5 per cent more in November than in the previous month, the statistics office Eurostat reported on Wednesday. Economists polled by Reuters had expected only a 0.2 per cent gain. Despite the ongoing recovery, the comparison with the previous year shows how badly the corona crisis is still affecting the sector: Production was 0.6 per cent below the level of November 2019, although experts had expected a much higher drop of 3.3 per cent.

However, in the pandemic times marked by lockdowns, industry proved to be the driving force behind economic development in the eurozone at the end of 2020 as well, slowing its downward slide significantly in December. However, the service sector, which was hit harder by the lockdown measures, is lagging far behind.

Affirm off to a flying start

Affirm Holdings had a marvellous start on the Nasdaq this Wednesday. Within only 30 minutes, the value of the shares, which had been issued the day before for 49 US dollars each, doubled. The first price was 90.90 US dollars. Most recently, the shares of the provider of instalment payments for online shoppers rose to almost 100 US dollars.

On Tuesday, the company founded by Paypal co-founder Max Levchin had issued 24.6 million shares, raising 1.2 billion US dollars. At the start of trading, Affirm’s stock market value was already around 22 billion dollars.

Long-time Apple supplier Foxconn and Chinese carmaker Geely are entering into a partnership. The aim is to provide contract manufacturing and consulting services to carmakers and mobility companies, the firms announced on Wednesday. They signed an agreement to set up a joint venture in which each partner will hold a half stake. Taiwan-based Foxconn had recently teamed up with financially troubled e-car maker Byton to build an electric SUV.