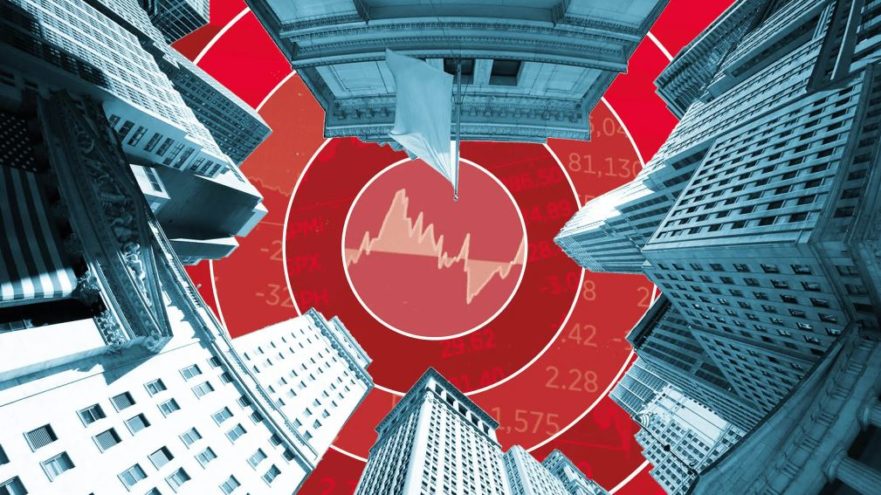 A flood of red

The roller-coaster ride of emotions in the markets and also of the values of each asset classes continues.

At first, the continuous easing of measures in the corona crisis was celebrated, and now investors are worried about possible negative consequences. In a US Senate video hearing, prominent US immunologist and government advisor Anthony Fauci warned against an overly rapid return to normality, while President Donald Trump is currently pushing for loosening. The trade conflict between the USA and China also continued to preoccupy investors as well as the dovish speech of Fed boss Jerome Powell.

This is because the US Federal Reserve Chairman rejected negative interest rates in the USA in an afternoon speech. Recently there had been increased speculation on the markets about this possibility in America as well. Besides, Powell does not expect the economy to recover quickly and called for further state aid.

The Dow Jones started trading with a small loss but then fell back further after a brief rise. In the end, the US leading index fell by 2.17 per cent to 23,247.97 points. The NASDAQ Composite, on the other hand, initially showed a minimal gain, and then repeatedly switched between loss and profit zones. It ended the NY session 1.55 per cent down at 8,863.17 points.

Fed Chairman Jerome Powell made it clear that he believes it is likely that a “longer period” of low growth and steady income is still to be expected. He also spoke in favour of further state aid. US President Donald Trump also contributed to investor uncertainty with another verbal attack when he once again blamed China for the spread of the coronavirus via Twitter: “As I have long said, trading with China is very expensive. We had just signed a great trade agreement, the ink had just dried and the plague from China hit the world. One hundred trade agreements could not compensate for that – and all the innocent lives that were lost”.

Asian stock markets failed to find a common direction on Wednesday. In Japan, the Nikkei closed with a loss of 0.49 per cent at 20,267.05 points. Headwind came from the firmer yen, which appreciated amidst the negative market sentiment.

The stock markets in Europe presented themselves on Wednesday with heavy losses. The EuroSTOXX 50 started the trading day somewhat weaker and then fell deeper into the red, where it ended the day with a significant loss of 2.55 per cent at 2,810.55 index units.

The DAX had already opened the day in the red and in the end, fell by a hefty 2.56 per cent to 10,542.66 units. The TecDAX also fell sharply in the day, having already fallen moderately at the start of trading. At the end of today’s session, however, it was able to limit its interim losses somewhat and closed 0.53 per cent lighter at 2,987.48 units.

he euro exchange rate fell sharply in US trading on Wednesday. The common currency was last quoted at $1.0816 after rising to $1.0895 in the European trading session.

Oil prices fell slightly on Wednesday. The overall gloomy mood in the financial markets weighed on oil prices, and surprisingly lower crude oil inventories did not boost the market. The cost of a barrel (159 litres) of North Sea Brent crude was most recently $29.56. That was 45 cents less than on Tuesday. The price of a barrel of US grade WTI fell by 25 cents to $25.53.

The gold price received a substantial boost in late trading as traders increasingly sought out safe havens again. In the evening, the troy ounce is traded for about $1,717.

The digital assets class continued its upward movement today. The most popular cryptocurrency Bitcoin increased by over 4 per cent to $9,200 while Ethereum gained almost 5 per cent to $200 and XRP was increasing by 2 per cent to $0.2010.

The world’s largest sovereign wealth fund, the Norwegian oil fund, has sold its shares in the German energy utility RWE.

After a review of the product-based coal criteria, RWE, as well as the companies Sasol, Glencore, AGL Energy and Anglo American, will be excluded from the fund because of the use and production of coal, the Norwegian central bank announced on Wednesday. At the end of 2019, the fund still held a 0.6 per cent stake in RWE, according to the responsible department of the central bank. The value of the share was thus 114 million US dollars.

Norway’s oil fund acts as an insurance policy for future generations when it is no longer possible to drill for oil. Its assets amount to almost one trillion US dollars. It is fed by the revenues from Norwegian oil and gas production and managed by the Central Bank on behalf of the Ministry of Finance. In June 2019, the Norwegian parliament voted in favour of the fund tightening its guidelines, for example for coal investments, and expanding its sales of climate-damaging assets. At the same time, billions are to be invested in renewable energies.

According to insiders, the European aircraft manufacturer Airbus is considering restructuring with massive job cuts. An ultimate decision has not yet been made, however, according to industry sources on Wednesday. If the plans are confirmed, the Boeing competitor is expected to inform the unions about its plans at the end of May.

Airbus is currently working on emergency plans for a longer-lasting crisis in the aviation industry due to the coronavirus pandemic. Airbus did not want to further comment on this. The newspaper “The Telegraph” had previously reported that the aircraft manufacturer wanted to cut 10,000 jobs. Airbus head Guillaume Faury had recently prepared the workforce for deep cuts.