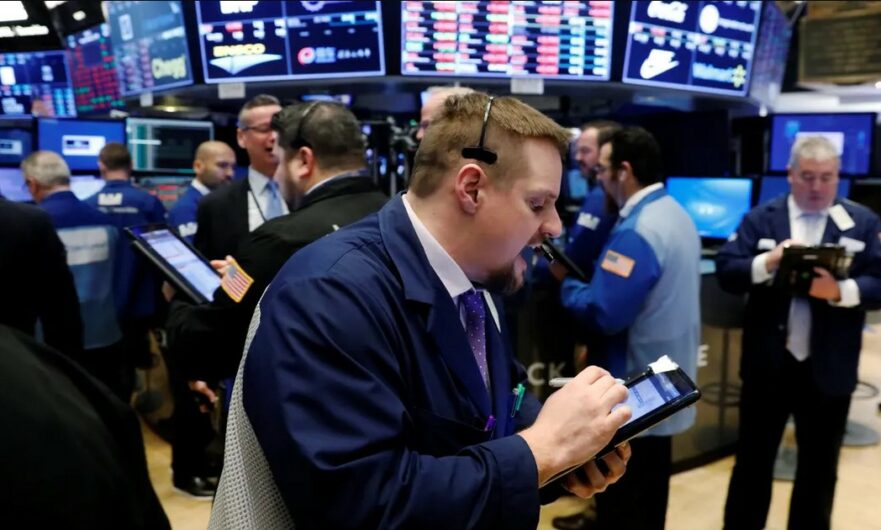 For a long time now, the world’s leading stock exchange has been discussing how long the Federal Reserve (Fed) will continue to inject billions of dollars a month into the economy. It is becoming clear that the Fed is heading for an early reduction in bond purchases to support the economy.

The curtailment of the purchase programme could begin in mid-November or mid-December, according to the minutes (Minutes) of the Fed’s 21-22 September meeting released on Wednesday. If the economic recovery continues, the bond purchases could be phased out around mid-2022, the minutes added.

Trade with the Best ECN Brokesrs

Wall Street reacted calmly, as the decision had been expected.

Wednesday’s trading outcome on the US markets was mixed. The Dow Jones index was 0.02 per cent lighter at 34,372.71 points when the bell sounded and then initially fell slightly into negative territory. In the course of trading, however, it worked its way back to the zero line and went into the evening virtually unchanged from the previous day’s close at 34,377.81 points. Meanwhile, the tech index NASDAQ Composite opened 0.49 per cent higher at 14,537.17 points and extended its gains as the day progressed. It ultimately closed 0.73 per cent higher at 14,571.64 points.

The trading day was dominated by consumer price data for September, which attracted particular interest given the current focus on inflation. According to the Labour Department, consumer prices rose by 0.4 per cent compared to the previous month – and are 5.4 per cent higher than in the same period last year.

Investors also looked forward to the start of the reporting season. JPMorgan, BlackRock and Delta Air Lines presented their first figures, with other major banks and corporations to follow during the week.

In Asia, the major indices showed different signs. In Japan, the Nikkei benchmark index fell by 0.32 per cent to 28,140.28 points by the end of trading, whereas the Shanghai Composite on mainland China was up 0.42 per cent to 3,561.76 points. Hong Kong did not trade on Wednesday due to a typhoon warning. On Tuesday, the Hang Seng closed 1.43 per cent lower at 24,962.59 units.

Investors continued to worry about inflation after the IMF warned of a rise in inflation expectations in the US in the latest World Economic Outlook. Besides, investors were cautious ahead of the start of the reporting season, market sources said.

In China, moreover, exports were up even more in September than in the previous month, beating expectations. Imports, on the other hand, grew slower than predicted.

The European stock exchanges were friendly in the middle of the week. The EuroSTOXX 50 lost slightly initially but then moved higher and closed 0.70 per cent higher at 4,083.28 points.

The leading index opened marginally lower on the Frankfurt stock market but posted clear gains in the day. The DAX 40 finally ended the day 0.68 per cent higher at 15,249.38 points. The TecDAX rose strongly and ended 1.84 per cent higher at 3,649.53 index units.

In the middle of the week, investors turned their attention to the USA. Inflation figures were on the agenda there. In addition, the Fed will publish its minutes of the latest interest rate meeting in the evening. The Fed is heading for a first moderate tightening of its wildly expansive monetary policy. Analysts expect it to start reducing its multi-billion-dollar securities purchases before the end of the year.

The euro, like other major currencies on the foreign exchange market, benefited from the weaker greenback. This was put under pressure by the predominantly friendly market sentiment. In the evening, the European common currency was traded for 1.1593 dollars.

There is also some relief in oil prices, which are currently considered the main driver of high inflation rates. Both North Sea Brent ($83.39) and US WTI ($80.56) cost less but remain at high levels.

The price of gold appreciated handsomely after the CPI data release. A plus of $30 stood on the board at the close of trading, and $1,793 were paid for the troy ounce.

Inflationary pressures in Germany increased as expected in September.

As the Federal Statistical Office announced in its second publication, the Harmonised Index of Consumer Prices (HICP) increased by 0.3 per cent compared to the previous month. It was 4.1 (August: 3.4) per cent above the level of the same month last year. As expected by economists, Destatis thus confirmed the result of the first publication. The same applied to the national consumer price index, which stagnated on a monthly basis and rose by 4.1 (3.9) per cent on an annual basis. Excluding the volatile prices of energy and food, inflation here was 2.9 per cent.

The British economy grew slightly less than expected in August. The gross domestic product rose by 0.4 per cent compared to the previous month, the statistics office ONS announced in London on Wednesday. Analysts had predicted an average increase of 0.5 per cent. Not only did the current growth fall slightly short of expectations, but the development in July was also weaker than previously known. Instead of a GDP increase of 0.1 per cent, the new figures show a decline of 0.1 per cent.

The boom in Chinese exports is not slowing down. In September, exports of the second-largest economy, calculated in US dollars, rose by 28.1 per cent compared to the same month last year, as Customs reported in Beijing on Wednesday. The increase was even higher than in the previous month, where experts’ expectations had already been exceeded with a plus of 25.6 per cent. On the other hand, imports grew more slowly than predicted at only 17.6 per cent, after rising 33.1 per cent in August.

Contrary to expectations, inflationary pressure in the USA increased again in September. According to the Department of Labour, consumer prices rose by 0.4 per cent compared to the previous month and were 5.4 (August: 5.3) per cent above the level of the same month last year. Consumer prices excluding food and energy increased 0.2 per cent, with annual inflation remaining at 4.0 per cent. Economists had expected monthly price increases of 0.3 per cent each and unchanged yearly rates of 5.3 and 4.0 per cent.

Real income in the USA rose by 0.8 per cent in September compared to the previous month. As announced by the US Department of Labour, a decline of 0.2 per cent was recorded in August. The average weekly income, seasonally and inflation-adjusted, was 391.62 US dollars after 388.57 dollars in the previous month.