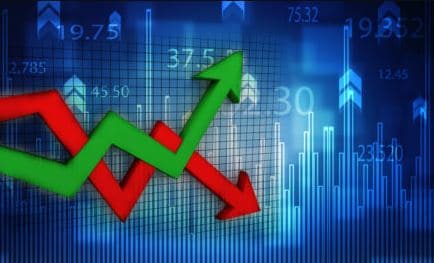 Overall, the markets moved back towards caution today. Yesterday investors, particularly in Europe, were in a buying mood. Today they went back to cover after the ambivalent Trump speech. On the other hand, the Dow rose to a new record high – thanks to Mister Jerome Powell.

The Fed President assesses the current economic outlook as relatively positive. The outlook for the economy remained fundamentally “favourable,” Jerome Powell said Wednesday at a hearing before a Congressional committee. Despite the ongoing tariff conflict, the US Federal Reserve is not targeting any further rate cuts for the time being. The monetary policy stance would “probably remain appropriate,” Powell said. This is seen as a sign to investors and politicians that the central bank wants to keep its feet still for the time being.

The Fed chief’s speech woke the Dow up. The US blue-chip index jumped to over 27,800 points for the first time in its history. Then the price gains melted away again. Two hours before the close of trading, the Dow was still up 0.1 per cent.

The stock markets in Asia showed red signs on Wednesday.

Predominantly, doubts about an early agreement between the USA and China weighed on the markets. US President Trump had again made threats against China that the US would further increase punitive tariffs on Chinese imports if the conflict was not resolved soon. The Hong Kong riots, which led investors to act cautiously, also remained a dominant theme.

Europe’s most important stock markets presented themselves in red on Wednesday.

The EuroSTOXX 50 moved into negative territory after a barely changed start and lost 0.34 per cent to 3,699.50 points by the end of trading.

The Dax was also unable to continue its high performance of yesterday. It closed 0.4 per cent lower at 13,230 points. At times, the price losses were even greater. Yesterday, the German benchmark index climbed to a new annual high of 13,308 points.

The euro exchange rate remained just above 1.10 dollars in US trading on Wednesday.

During the low, the common currency slipped to 1.0995 dollars, its lowest level since mid-October. However, the excursion below the mark was only short, with the euro recently trading just above it again at 1.1002 dollars. The European Central Bank (ECB) had meanwhile set the reference rate at 1.1006 (Tuesday: 1.1015) dollars. The dollar had thus cost 0.9086 (0.9079) euros.

Market observers spoke, as recently, of continued broad dollar strength in the currency market, which had burdened the euro somewhat. New data on price developments in Germany and the USA hardly moved the currencies during the trading sessions.

In contrast, oil prices turned positive. The price for the North Sea variety Brent climbed by 0.7 per cent to 62.52 dollars per barrel, US light oil of the WTI variety rose by one per cent to 57.38 dollars. Mohammed Barkindo, Secretary-General of the Organization of Petroleum Exporting Countries (Opec), and central bank chairman Jerome Powell dispelled investors’ concerns about a global recession.

The price of gold also rose on Wednesday. The mood swings in the market and the critical situation in Hong Kong have given the safe-haven gold a new boost. Recently, the precious metal cost $1,462.66, a plus of 0.42 per cent.

The cryptocurrency market is still stagnating. Also, on Wednesday, there was little movement. The Bitcoin price is still around $8,800, Ethereum costs about $187 and XRP $0.2710.

On Wednesday, bank shares, in particular, were under pressure. The European bank index fell by more than two per cent. Deutsche Bank’s shares lost around four per cent as the tail end of the DAX, while Commerzbank shares fell by more than six per cent. Investors fear that the ongoing unrest in Hong Kong will harm the economy in the entire region. In London, the shares of the two Asian banks HSBC and Standard Chartered fell under the wheels. The weak business figures of ABN Amro, whose shares in Amsterdam lost almost five per cent, proved an additional burden.

Investors at Disney+ bet on success against Netflix

The rally at Walt Disney, which has stumbled since the summer, received a boost on Wednesday from the media group’s newly introduced streaming service.

According to the company, there are already 10 million subscribers for the service, which is supposed to compete with the big adversary Netflix. Analysts were pleasantly surprised by this figure in initial reactions.

The day before, the introduction of “Disney+” in the USA had already supported the share price and made the shares the biggest Dow winner with 1.4 per cent, now the first water level report on the user figures got the price going. By the end of trading, equities had climbed 7.32 per cent to $148.72, above their previous high of $147.15 in July this year.

The Disney share was thus by far the biggest winner in the Dow on Wednesday – and probably also a vital driving force behind the fact that the leading index has since broken another record. Netflix investors, on the other hand, were intimidated by this on Wednesday. The price of the streaming pioneer fell on the Nasdaq exchange by 3.05 per cent to 283.11 dollars.

Apple wants to replace the iPhone with smart glasses

For some years, Apple has been working on data glasses with Augmented Reality (AR). The US tech portal “The Information” reports that a smart pair of glasses will finally be launched on the market in 2023, citing participants at a secret Apple staff meeting. According to Apple executives, the AR glasses will replace the iPhone in about a decade. Will this be the “next big thing”?

A downturn in the core business with smartphone games surprised the Chinese Internet giant with a drop in profits in the quarter. The result fell by 13 per cent to 20.38 billion yuan (2.64 billion euros). Analysts had expected 23.45 billion yuan. China’s largest games and social media company is struggling with weaker economic development and new rules to combat gambling addiction among young people.