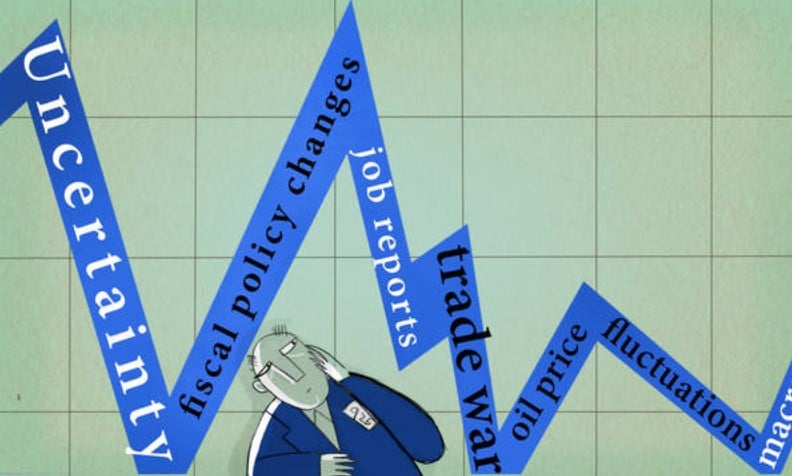 Slowly but surely, the mood on the stock exchanges is clouding over again. After a brilliant start into October, the share price fell both on Tuesday and yesterday, in some cases significantly.

In addition to the critical issues of Brexit, corona infection figures and the still uncertain new aid package from the US government, quarterly reports from companies in the USA are now also due. Some of these have already turned out to be rather sobering, which further cautions investors to be careful.

The US presidential election also remains in the focus of the markets.

Today, all these uncertainties are increasingly driving investors back into safe havens such as government bonds or precious metals like gold and silver.

Wall Street posted losses across the board today. The Dow Jones opened 0.17 higher at 28,731.30 units, but slipped into the red in the day, closing 0.58 per cent lower at 28,514.63 points. The technology-heavy NASDAQ Composite index lost 0.80 per cent to 11,768.73 points. The enormous tech-rally of the previous days was, therefore, halted for the time being.

US Secretary of the Treasury Steven Mnuchin put pressure on market sentiment. Although he wants to continue negotiations, he considers it difficult to reach an agreement with the Democrats on a further corona economic stimulus program before the presidential election on November 3. Continuing concerns about the global development of corona infection figures have curbed risk appetite as well.

Hong Kong’s Hang Seng rose 0.07 per cent to 24,667.09 points after trading was halted on Tuesday due to a typhoon warning.

Market participants spoke of profit-taking in some places after several days of upward movement. According to traders, financial stocks, in particular, were under pressure due to the significant drop in bond market yields in the US.

European stock exchanges closed almost unchanged. The EuroSTOXX 50 closed with a minimal discount of 0.18 per cent at 3,273.28 index units.

In Frankfurt, the Dax 30 closed minimally up at 13,028 points. All day long it had been struggling with the round mark of 13,000 points. The TecDAX ultimately moved 0.23 per cent higher at 3,205.55 points, having already gained at the start of trading.

Although the corona pandemic, the Brexit uncertainty and the uncertainty surrounding the US elections continued to weigh on sentiment, market participants were counting on further monetary and fiscal policy stimuli.

On the Forex market, the euro went up again somewhat on Wednesday after the weakness of the previous day. Hopes for a solution to the Brexit dispute supported the common currency, which last traded at 1.1753 US dollar in New York.

The oil prices have increased on Wednesday. In the day, oil prices were supported by the falling dollar exchange rate. The price for a barrel of North Sea Brent was 43.20 US dollars today, 75 cents more than the day before. For a barrel of West Texas Intermediate (WTI) was paid 82 cents more today, pushing the price to 41.02 US dollars.

Gold also continued to rise, closing just below the $1,900 mark. At the start of trading, $1,890 per troy ounce was still on the price board.

In the past quarter, the food delivery service Just Eat Takeaway was able to increase the growth in orders during the corona crisis significantly. Worldwide, the delivery service recorded 151.4 million orders between July and the end of September, 46 per cent more than a year earlier, the company announced in Amsterdam on Wednesday.

Investors are delighted: the shares finally soared by 6.51 per cent to 104.15 euros, thus closing at a new record high.

The manufacturer of navigation devices earned less in the third quarter but exceeded analysts’ estimates. The operating result (Ebitda) slumped to 3.9 (previous year: 15.9) million euro. Experts had expected a decline to one million euros. Sales shrank by ten per cent to 147.9 million euro, after slumping by 41 per cent in the second quarter as a result of the corona crisis. “Market conditions are improving, and we are pleased that our automotive business is proving robust and that sales are growing in some areas,” explained CEO Harold Goddijn.

Concerns about new restrictions in global travel due to the ever-increasing number of coronavirus infections again weighed on Lufthansa’s papers on Wednesday. At minus 2 per cent, the shares are among the weakest stocks in the MDax of the 60 medium-sized companies. The shares of airport operator Fraport lost 1.5 per cent. Since their Corona high of 12.56 euros, which the Lufthansa shares reached in June before the state stepped in to rescue the airline, the shares have hardly recovered. The former Dax Group is facing new cuts with a further reduction in capacity and the corona crisis, which has now flared up more strongly again, is affecting the former Dax Group.