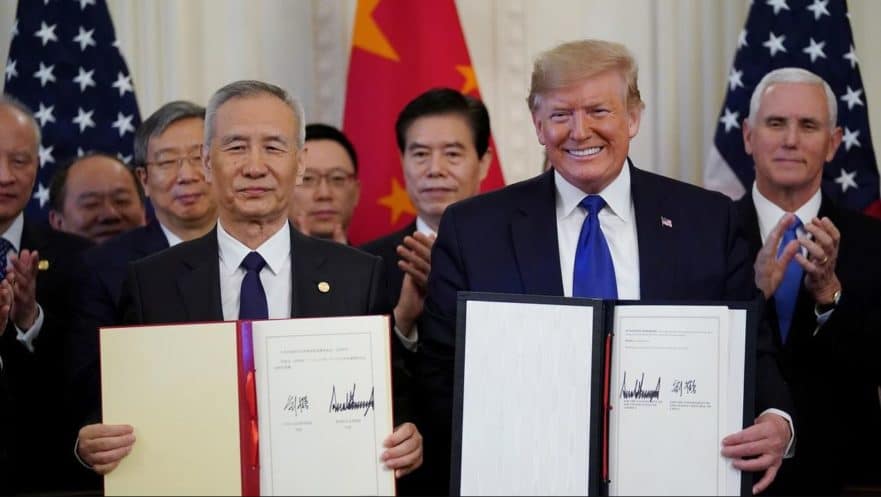 Who would have thought that still possible? It is finally done! The first partial agreement between the USA and China was officially signed.

This means that there is a slight easing of tension in the trade war between the two world economies, which has already lasted two years. However, the partial deal had little impact on the stock markets on Wednesday, especially as some experts announced scepticism. “On closer inspection, the big deal praised by US President Donald Trump turns out to be a mini-deal,” wrote Thomas Gitzel, Chief Economist of VP Bank, for example. For the most part, the agreement sounds more like a declaration of intent than a sophisticated arrangement. But in many places, he said, the trade agreement was losing substance. Against this backdrop, the government securities that were considered secure were in demand.

Although China is expected to purchase more US products again, most of the existing tariffs will remain in place for the time being. Controversial issues such as the theft of intellectual property, forced technology transfer between companies and subsidies will probably only be clarified in a second phase.

That is why investors waited for further details on Wednesday. “Considering how much positive news on the stock market has already been factored into prices, the deal would have to be phenomenal to trigger the next round of buying,” said analyst David Madden of trading house CMC Markets.

Fundamental tailwind for the markets comes from the Empire State Index, an economic indicator from the New York metropolitan area that is highly regarded on the stock exchange. The index stood at 4.8 points for January, while experts had expected only 3.55 points.

Meanwhile, Goldman Sachs and Bank of America were not really convincing on the corporate side with their quarterly figures.

The wave of euphoria on Asian stock markets due to the Phase 1 trade agreement between the USA and China ebbed a little bit on Wednesday. The mood was dampened by a media report according to which tariffs on goods exported to the US from China will not be removed despite the signing of a first trade agreement. This reminded many investors that despite the partial agreement, the trade dispute is far from being resolved.

Japan’s leading index, the Nikkei, fell by half a per cent to 23,916 points by the close of trading. The CSI-300 index with the 300 most important shares on the Chinese mainland stock exchanges was down by more than half a per cent shortly before the end of trading, as was the Hang Seng in Hong Kong.

Investors on Europe’s stock exchanges continued to hold back on Wednesday. The EuroSTOXX 50 had started almost motionless and then slid into the red. In the end, it dropped 0.16 per cent to 3,768.96 points.

The DAX, the leading index, had started with a small loss, which it extended in the following trading session. In the evening, it closed 0.18 per cent lower at 13,432.30 points. The TecDAX also started the day with a small loss but ended the day 0.15 per cent higher at 3,103.57 points.

The euro made up for initial losses on Wednesday and has recovered moderately over the day. Most recently, the common currency of the 19 euro countries cost USD 1.1152, which is slightly more than in the morning.

The British Pound was again under pressure. The market was referred to inflation data, which provided fresh impetus for the ongoing debate on interest rate cuts. In December, the inflation rate dropped to a three-year low. In the past few days, several high-ranking central bankers have signalled their inclination towards a looser monetary policy, including central bank chairman Mark Carney.

Oil prices continued their recent losses on Wednesday. A barrel (159 litres) of North Sea Brent crude last cost 64.08 US dollars. That was 41 cents less than on Tuesday. The price of American WTI crude oil fell by 34 cents to 57.88 dollars.

Oil prices came under pressure after the publication of stock data from the USA. Crude oil inventories had fallen surprisingly while stocks of gasoline and distillates had risen very sharply. In addition, crude oil production had climbed to a record level.

The troy ounce of gold is trading 0.35 per cent higher in the evening at just over $1,555. According to experts, the “crisis currency” is reacting to the prospect of further braking effects on the global economy due to the continuing tariffs between the USA and China.

Cryptocurrencies remained surprisingly stable on Wednesday after the sharp boost from Tuesday. The total market capitalization for all digital assets is still at approximately $240 billion, almost 30 billion USD more than at the start of the week. At present, Bitcoin is valued at $8,800, Ethereum at $165 and XRP at $0.2350.

In the future, it will be more difficult for the advertising industry to collect information about the behaviour of users when surfing the web. After Apple and Firefox developer Mozilla took action against so-called cookies from data collectors, Google also wants to squeeze them out of its Chrome web browser in the next two years.

Chrome dominates the market of programs for navigating the web with a share of more than 60 per cent. This should mark the end of this type of data collection.

Overall, the economy made a solid start to the new year, having maintained its moderate plus in the last six weeks of 2019, the US Federal Reserve said in its Beige Book economic report. The tight labour market, slow price increases and a solid Christmas business – especially for online purchases – compensated for the weakness in the manufacturing sector.

Expectations regarding the short-term outlook remained moderately favourable, the report continues. The report indicates that companies are confident in their prospects.

For the next meeting (January 28/29), the expectation is that the Fed will leave its key rate stable. In 2019 it had lowered it in three steps to between 1.50 and 1.75 per cent. The latest interest rate projections showed that most Fed Council members expect interest rates to remain stable this year.

The German economy has once again shifted down a gear under the impact of trade wars, global conflicts and the weaker world economy. According to the German Federal Statistical Office, gross domestic product (GDP) increased by only 0.6 per cent in 2019, after 1.5 per cent and 2.5 per cent in 2018 and 2017. 2019 was the tenth consecutive year of growth since 2010 when Europe’s largest economy had to recover from the deep recession in 2009 as a result of the global financial crisis.