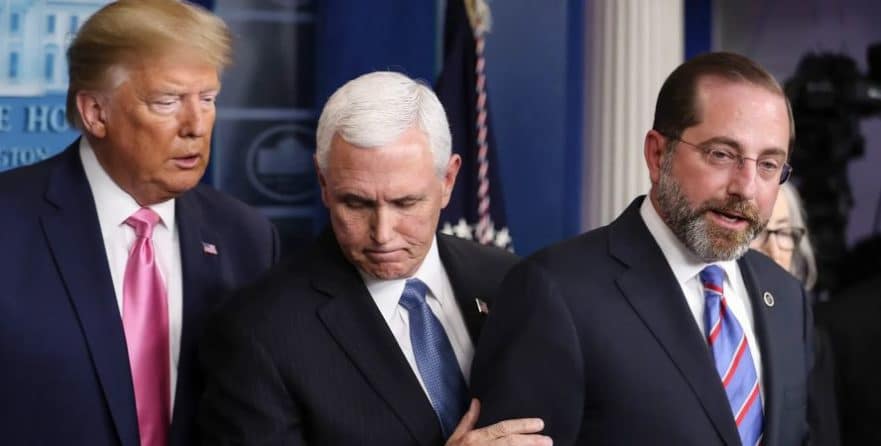 Away from fantasy into factual reality

After Donald Trump smashed the WHO on late Tuesday, blaming them of taking China’s word for the fact when the corona crisis kicked off and saying that the USA will halt their contributions to the WHO in turn, the markets started to turn sour already. This harsh criticism put the fear out that the relationship between the US and China could spark yet another crisis between the two super-powers. Of course, China responded with criticism over the US President’s comments and actions.

In addition, today, Wednesday, fears of a recession began to blossom again after devastating economic data was transmitted from the USA.

Jochen Stanzl, Chief Market Analyst at the brokerage house CMC Markets, commented aptly: “The fantasy of investors awakened in recent days in expectation of an imminent gradual normalisation of daily social and economic life has now been severely dampened.”

After hopes for a flattening of the corona spread curve had been rife the previous day, investors were again seized by uncertainty on Wednesday. Fear of the economic consequences of the global pandemic remains high. US economic data releases regarding US retail sales and industrial production showed some disastrous results. The Empire State Manufacturing Index fell to an all-time low, and US industrial production recorded the sharpest drop since 1946.

The Federal Reserve also released its Beige Book economic report this evening. The Fed said that the Corona crisis has hit the US economy hard, and that “economic activity in all regions of the US contracted sharply and abruptly as a result of the pandemic,” the Fed said in its Beige Book released Wednesday. In its previous report, published in early March, it had spoken of a “moderate to moderate” pace of growth.

The most important stock exchanges in Asia weakened on Wednesday after some substantial gains on the previous day. The stock exchange in South Korea remained closed on that day because of the parliamentary elections.

The Chinese central bank continues to brace itself against the economic consequences of the coronavirus pandemic. For 100 billion yuan (around 12.9 billion euros), loans with a term of one year were offered to the country’s banks at an interest rate of 2.95 per cent, according to China’s central bank. So far, the interest rate has been 3.15 per cent. Besides, banks in the country are being made easier to grant loans.

The European stock markets showed heavy losses on Wednesday. The EuroSTOXX 50 opened with a slight decline, but then expanded considerably in the further course of trading. In the end, a minus of 3.75 per cent at 2,808.20 points remained on the price board.

At the end of a disappointing trading day, the Dax lost 3.9 per cent to 10,279 points. Fears of the world’s worst recession in decades have now scared investors off. The TecDAX also fell sharply in the day, whereas it had still risen slightly. In the end, it dropped by 2.99 per cent to 2,793.80 units.

The euro exchange rate edged up somewhat in New York trading on Wednesday. The common currency was last traded at $1.0923 after falling to $1.0857 in European trading. In Asian trading, the euro was still trading at almost 1.10 dollars. The high level of uncertainty caused by the Corona crisis is driving investors into the US dollar, traders said on Wednesday.

Oil prices dropped significantly again on Wednesday. Market observers pointed to a forecast by the IEA, which expects a massive drop in demand. Most recently, a barrel of North Sea Brent crude cost $27.63. This was 1.97 dollars less than the previous day. The price for a barrel of the American WTI variety fell by 64 cents to 19.46 dollars.

After its high of the past few days, gold has now consolidated more clearly. The troy ounce of the precious metal costs $1,718 in the evening. The previous day, a multi-year high had been reached with prices of up to 1,747 dollars.

All major cryptocurrencies suffered losses today. Bitcoin and Ethereum lost over 4 per cent to $6,500 and $150 respectively. The third-largest digital asset by market capitalisation, XRP also lost approximately 4 per cent to currently $0.1780.

Stay inside and watch Netflix

In the middle of the crisis, there is also good news today. Netflix stock rose to a record high today. At its peak, it reached a price of 430 dollars. Currently, the plus is a good three per cent, and the share is at 426 dollars.

The streaming provider and film producer is considered one of the beneficiaries of the virus crisis. Since many people are currently working little or not at all due to the restrictions of economic and public life, consumption at home is rising in the wake of entertainment.

Since their low in the wake of the virus crisis of 290.25 dollars in mid-March, Netflix shares have now gained more than 44 per cent.

Adidas, the world’s second-largest sports goods manufacturer, needs billions in loans from the state in the corona crisis. On Tuesday, the German government approved a syndicated loan of three billion euros, of which the development bank KfW alone is contributing 2.4 billion, Adidas announced in Herzogenaurach. More than seven banks share the remaining 600 million euros.

Due to the worldwide store closures, the highly profitable Dax company has lost sales. In China alone, Adidas is missing up to one billion euros. In return for the state loan, Adidas has to cancel the dividend as long as the loan runs. On Wednesday morning, the share reacts to the news with slight price losses.