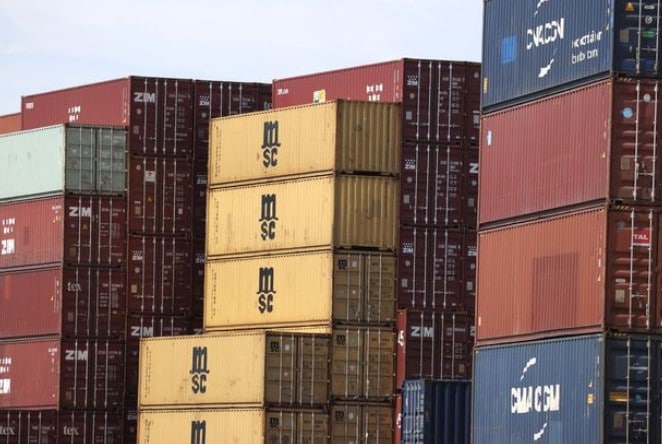 After surprisingly good economic data, concerns are growing in the USA about an interest rate hike next year.

Strong retail sales are adding to speculation of an interest rate turnaround in the US soon. “The good news for investors is that aggregate demand appears to be weathering the inflation hike so far,” Bank of America analysts said. “The bad news is that the combination of robust demand and a large supply shock makes a strong case for Fed tightening.” The Fed could raise key interest rates as early as the middle of next year, stockbrokers fear.

After a solid start, the US indices finally posted losses today. The Dow Jones opened the session only marginally higher but fell back into red territory as it progressed, ending the day down 0.58 per cent at 35,931.05 points. Meanwhile, the tech index NASDAQ Composite also trended slightly weaker after starting the day, almost unchanged. It closed 0.33 per cent lower at 15,921.57 points.

After the US stock markets recorded gains the previous day following surprisingly strong economic data, they tended to show a negative trend on Wednesday. However, the environment for shares remains favourable despite interest rate fantasies. The fear of missing out is still there.

On the economic side, housing starts and permits for October were released in the pre-market. While housing starts surprisingly fell, building permits rose more than analysts expected.

Strong US data did not provide any support on Wednesday. The fact that the meeting between US President Joe Biden and China’s head of state Xi Jinping brought few concrete results in easing tensions between the two sides probably had a slightly negative effect. They merely wanted to stay in contact.

Investors on the European stock exchanges were somewhat restrained in the middle of the week. The EuroSTOXX 50 began Wednesday’s trading without any major fluctuations and ultimately ended the day 0.02 per cent lower at 4,400.81 index units.

The German stock market held at a high level in the middle of the week. At the opening of trading, the DAX stood virtually motionless at 16,248.32 and was trading marginally 0.02 per cent higher at 16,251.13 points at the end of the day. The TecDAX, meanwhile, started the day slightly higher and extended its gains over the day. It ended the session 0.73 per cent stronger at 3,950.06 points.

The further weakening of the euro against the US dollar and the oil price weakness continued to support the European markets. Meanwhile, various market participants said that the renewed increase in interest rate speculation did not weigh on the bad guys.

The euro is currently coming under pressure on the foreign exchange market from several sides. On the one hand, monetary policy is weighing on the common currency: while the US Federal Reserve has initiated the exit from its loose course, the ECB has not yet given any signals for an end to its very expansive policy. Added to this is the tighter corona situation in Europe. Corona measures are being tightened again in some Eurozone countries, making economic recovery more difficult. Most recently, the euro cost 1.1314 dollars. In Asian business, the common currency had fallen to 1.1264 US dollars, its lowest level since July 2020.

Meanwhile, statements by Turkish President Recep Tayyip Erdogan sent the lira down again. The Turkish currency fell to record lows against the dollar and the euro. One US dollar now trades at around 10.6 liras, while one euro costs a good 12 liras.

Speculation about the release of national crude oil reserves of major countries weighed on oil prices. According to Chinese media reports, the political leaders of the USA and China, Joe Biden and Xi Jinping discussed a mutual approach this week. The initiative had come from the USA. Japan, too, had recently insisted on a higher oil supply. Brent oil from the North Sea fell by 1.16 dollars to 81.27 US dollars, while WTI from the USA fell by 1.46 dollars to 79.30 dollars.

The gold price recovered today, rising over $15 intraday to $1,866 a troy ounce.

Cryptocurrencies stabilised and mostly recovered somewhat after the past two days losses. Bitcoin traded 0.4 per cent higher at $60,100, while Ethereum gained 1.7 per cent to $4,286. Binance Coin, Solana and Cardano posted small losses of around 0.5 per cent, while XRP recovered by 0.3 per cent to $1.10 and Polkadot climbed 3.7 per cent to $42.50.

Orders on hand in the German industry continued to rise in September and reached a new record level. Compared to the month of August, it increased by 2.4 per cent, as reported by the Federal Statistical Office (Destatis). Highs had already been marked in June, July and August. The order backlog has risen steadily since June 2020 and in September 2021 reached its highest level since the statistics were incepted in January 2015. Open orders from the domestic market rose by 1.2 per cent and those from abroad by 3.1 per cent in September. New orders have developed more strongly than the turnover in recent months. This means that the companies received more new orders than they were able to process. A major reason for the high order backlog is likely to be supply bottlenecks for intermediate products.

The strongest increase in consumer prices in 10 years brings an interest rate hike in the UK closer. Prices rose by 4.2 per cent in October compared to the same month last year, as the statistics office announced in London on Wednesday. This means that the upward trend has accelerated considerably: Inflation had stood at 3.1 per cent in September. Economists polled by Reuters had expected a further rise, but only to 3.9 per cent. “The greatest upward pressure came from electricity, gas and other fuels,” the statisticians said, explaining the development.

Inflation in Austria climbed to its highest level in 13 years in October. Price surges for fuel and heating oil drove the inflation rate to 3.7 per cent, as Statistics Austria reported on Wednesday. In September, inflation was at 3.3 per cent.