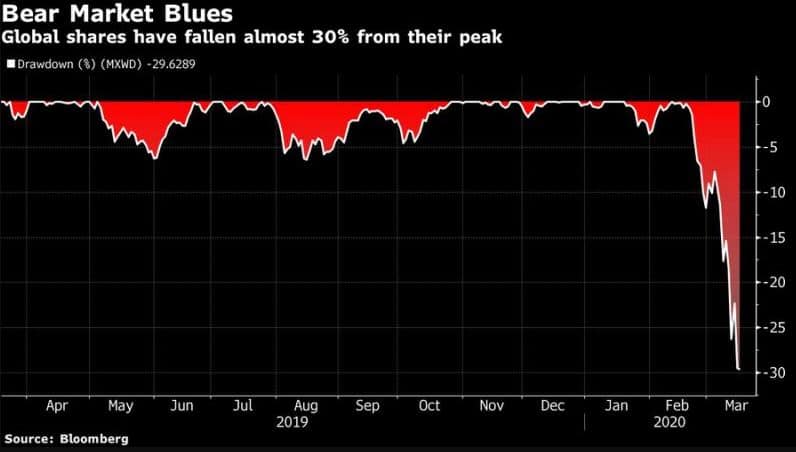 Not at all slowly, but surely it is getting darker and darker on the international stock exchanges.

Uncertainty about the consequences of the crisis triggered by the novel coronavirus remains exceptionally high and continues to weigh on the stock markets today. Numerous economists assume that the global economy will slide into recession because of the pandemic.

The economic consequences of the crisis are becoming increasingly apparent with each trading day. More and more companies are already unable to meet their forecasts for 2020. Government aid programs have so far been nothing more than a flash in the pan; what seems to be missing is simply an effective drug or a vaccine to contain the pandemic disease that would be like “hopium” for the markets. But this is not to be expected in the short term.

On the New York Stock Exchange, too, fears of a recession continue to run rampant. The announcement of government support packages and monetary policy measures in the USA had fired up Wall Street in the evening, but nothing more has remained. After a drop of over 7 per cent, trading was even once again halted.

The Dow Jones opened 4.94 per cent down at 20,188.69 units and is falling even lower. In the meantime, it has again fallen below the psychologically important 20,000 mark. The tech stocks index Nasdaq-Composite started 5.9 per cent lower at 6,902.32 points and also continues its freefall.

This highlights once again that the US Federal Reserve is unable to calm the economy despite a variety of stimuli. As recently as yesterday, US Finance Minister Mnukhin spoke of wanting to keep the stock market open, but that a shortening of trading hours was within the realm of possibility.

Asian stock markets fell again on Wednesday after calming down the previous day. In Japan, the leading index Nikkei-225 lost 1.7 per cent to 16,726 points. Losses were also recorded in China and Hong Kong. The CSI 300 of the Chinese mainland stock exchanges recently fell comparatively moderately by 0.5 per cent. In Hong Kong, the most recent markdowns were significantly higher at the Hang Seng at around three per cent.

The European stock markets also showed further significant declines on Wednesday. Although the EuroSTOXX 50 started the day higher, the upward trend did not prove sustainable. It closed 5.72 per cent lower at 2,385.82 points.

The Dax 30 already started the day with significant levies and continued to build on them as the day progressed. In the end, the loss amounted to 5.56 per cent at 8,441.71 points. The TecDAX also showed negative signs in the morning and ended the day 4.08 per cent lower at 2,202.23 units. The losses since the beginning of the stock market crash in February now add up to more than 5,100 Dax index points or almost 40 per cent.

Not only did the euro fall back below USD 1.10 on Wednesday, but it also continued to increase its losses after that. The European single currency is trading at $1.0817 in the late afternoon. In the morning, it had briefly risen to 1.1045 dollars, only to come under pressure again. The European Central Bank (ECB) set the reference rate at 1.0934 (Tuesday: 1.0982) dollars.

The British pound also continued to slide. Against the Dollar, the price slid to 1.1757 in midday trading, its lowest level since 1985. The AUD/USD pair today slid to below $0.54, levels that haven’t been seen since the year 2003!

Oil prices continued their decline on Wednesday, falling to long ago levels. Most recently, a barrel of North Sea Brent crude cost $25.29. That was $3.45 less than the previous day. This is the lowest level since 2003 when the price of a barrel of American WTI slid below the 25 dollars per barrel mark for the first time since 2002. Most recently, US oil traded at 22.22 dollars, 4.73 dollars less than the previous day.

Fear of closing the stock market

The shares of Deutsche Börse continued their decline on Wednesday as a weak value in the DAX. The Deutsche Börse share ultimately fell 9.31 per cent via XETRA to 99.08 euros. Experts justified the significant losses in the shares of the stock exchange operator, which is one of the beneficiaries of extreme volatility and high trading volumes, with the expectation of possible stock exchange closures.

One market participant noted that the pressure is increasing given the massive distortions. It is incomprehensible that the destruction of share values to this extent is being allowed before the situation returns to normal. Another trader pointed out the danger of significantly lower commissions because of the significant drop in prices.

However, the slump on the German stock market triggered by the coronavirus crisis is no reason for Deutsche Börse to stop trading. “The consequence of the closure of the markets would be intransparency. The consequence would be even greater uncertainty”, a spokesman for the market operator in Eschborn near Frankfurt told the financial news agency dpa-AFX on Wednesday. The distortions in the markets would then become even more drastic.

Furthermore, there is also no legal basis. Only in the case of technical disruptions, information imbalances, or indications of market manipulation, for example, can the management of the exchange suspend trading as a whole or for individual securities.

The US government wants to keep the stock markets open despite large price fluctuations. However, trading hours may be shortened, said Treasury Secretary Steven Mnuchin in Washington on Tuesday.

The Irish airline Ryanair is cancelling virtually all its flights from Tuesday 24 March. The company announced this on Wednesday. Already in the night to Thursday, 80 per cent of the flights are to be cancelled. From next week on, only a few machines of the Ryanair fleet will take off to maintain “essential connections”, especially between Ireland and Great Britain.

The airline will possibly also participate in return flights of EU citizens, the communication said. It is in contact with the foreign ministries of all EU countries. Customers were asked not to call. Those affected should be informed of their options by e-mail.

Against the strong downward trend on the German stock market, the shares of BioNTech continued to rise on Wednesday. In early NASDAQ trading, the shares gained 30.63 per cent to 87.00 dollars. The euphoria is driven by the prospect of the development of a vaccine against the coronavirus.

On Monday the BioNTech shares had already risen by more than 45 per cent and on Tuesday by another 55 per cent. The biopharmaceutical specialist from Mainz intends to develop a vaccine against Covid-19 together with Fosun Pharma in Shanghai and will receive up to 120 million euros in advance payments for future investments from its partner Fosun.