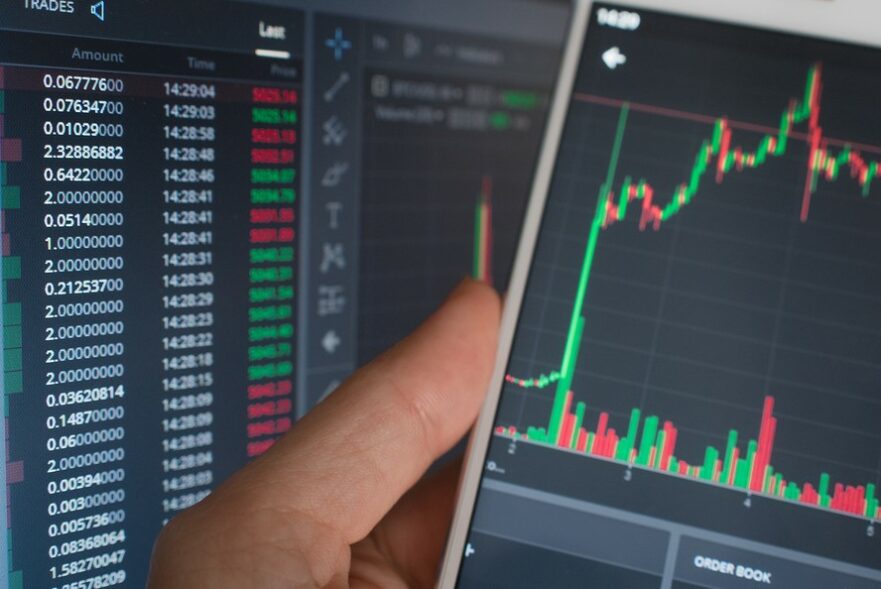 When will the end of the ultra-loose monetary policy begin? This question remained open after the minutes of the last Fed meeting were published this evening. The members of the US central bank showed disagreement on when to reduce bond purchases. Most participants were of the opinion that “substantial further progress” towards the full employment goal, which is considered a prerequisite for a reduction in central bank support, had not yet been achieved.

The minutes highlighted differences among the dollar watchdogs. For example, some central bankers noted that monetary policy was still needed to repair the corona-related damage to the US labour market. Others argued that the Fed could do little to help.

The projected uncertainty about the Fed’s future course unsettled investors on Wall Street and also other global stock markets.

Wall Street investors were concerned about the Fed’s unsettled stance.

The Dow Jones started moderately lower and trended around the zero lines for a long time. However, after the presentation of the minutes of the last Fed meeting, the stock market barometer slipped significantly. In the end, a loss of 1.08 per cent to 34,960.69 points was recorded. In addition, the NASDAQ Composite was trading 0.89 per cent lower at 14,525.91 units.

As in the European stock markets, investors focused on fears about the impact of the rising corona infection figures on the global economy. According to the minutes, the US Federal Reserve could move away from its ultra-loose monetary policy as early as this year. However, central bankers do not yet seem to be in agreement about the timing. While some experts expect a reduction of bond purchases in 2021, others seem to think that next year would be better.

Stock markets in Asia moved into the black at midweek after a lighter start. Nevertheless, the losses of the previous day cannot be fully compensated. Exports in Japan rose significantly in July, but not as much as predicted, which nevertheless did not weigh on the markets.

Investors also focus on statements by US Federal Reserve Chairman Jerome Powell from the previous day, which could lead to price-supporting speculation on the stock markets, as the feared tightening of US monetary policy may not be ready yet.

Many of the European stock markets trended somewhat weaker on Wednesday. The EuroSTOXX 50 started the day slightly higher but then slipped into the red and ended the day 0.17 per cent down at 4,189.42 points.

The German leading index DAX started the session marginally firmer, then slipped into the loss zone to change sign again in the afternoon. In the end, the German benchmark index ended Wednesday’s trading 0.28 per cent stronger at 15,965.97 index points. The TecDAX also started slightly higher and was able to extend its gains until the closing bell sounded. It closed 0.66 per cent up at 3,879.05 points.

The markets are currently in a summer slump, and there has been no clear trend recently. The reporting season is also almost over, which means that there is a lack of impetus. Meanwhile, the rising number of corona infections was followed with concern on the stock exchanges. The geopolitical problems in Afghanistan also brought some uncertainty to the markets.

The euro briefly rose to 1.1742 dollars on the foreign exchange market after the publication of the Fed minutes but quickly had to give up the gains. Most recently, the common currency cost less again at 1.1714 dollars. Given the continuing economic worries and the Afghanistan crisis, investors were betting on the safety of the dollar. Against a basket of many major currencies, the dollar index remained only slightly below the value of 93.20 points reached the beginning of April.

Oil prices fell again on Wednesday after a brief recovery the previous day. Brent oil from the North Sea grade cost 41 cents less at 68.61 US dollars in the evening. US WTI oil fell by 56 cents to 66.06 dollars.

Overall, the cryptocurrency market also trended sideways but ultimately posted a gain of 1.6 per cent, just below the $2 trillion marks. Both Bitcoin and Ethereum appreciated 0.5 per cent to $45,100 and $3,06, respectively, while some other altcoins rallied much stronger. As an example, Cardano, currently sitting at the number 4 spot in terms of market capitalisation, just behind Binance Coin, shot back up 10 per cent to $2.15. Solana fared even better and rose 14 per cent to $75, while XRP moved up 5.2 per cent to $1.18. However, the biggest gainer among the top cryptocurrency projects was Terra LUNA, with a 24-hour-plus of 24 per cent to $31.20.

Japan’s exports continued to recover strongly in July. Driven by high demand for cars and car parts in the USA and for chips and semiconductor equipment in China and other Asian countries, the value of exports rose by 37 per cent compared to the same month last year, the Japanese Finance Ministry announced on Wednesday based on preliminary data. Japan’s exports thus increased for the fifth month in a row. However, analysts had expected a higher increase. The trade balance of the world’s third-largest economy ahead of Germany showed a surplus of about 441 billion yen (3.4 billion euros) in July.

Orders on hand in the German industry continued to rise in June and reached a new record level. Compared to May, it increased by 2.8 per cent, as reported by the Federal Statistical Office. The order backlog has been on an upward trend without interruption since June 2020 and is now at a new high since the statistics were introduced in January 2015. Open orders from Germany increased by 4.0 per cent in June and those from abroad by 2.2 per cent.

The inflation rate in the eurozone rose above the 2 per cent mark in July. The annual inflation rate increased from 1.9 to 2.2 per cent, as the statistics authority Eurostat announced in a second publication. The statisticians thus confirmed – as expected by economists – their first estimate from 30 July.