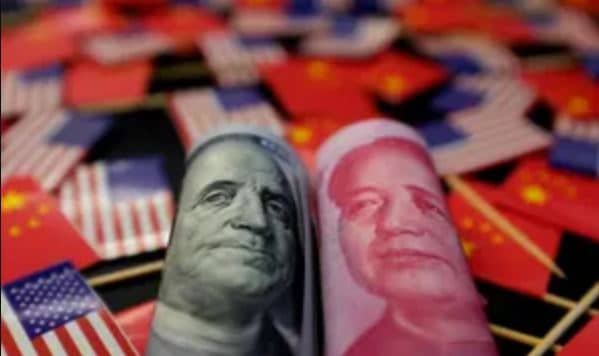 US President Donald Trump has intensified tensions in the US-Chinese trade dispute with his threat of even higher punitive tariffs. This makes even a limited “phase one” agreement less likely this year. In addition, China reacted angrily to the fact that after the US House of Representatives, the Senate now decided to adopt draft laws to support the democracy movement in Hong Kong. The Chinese government sharply criticised this, which could also aggravate the trade conflict. Analyst Christian Schmidt of Helaba warned that the higher risk aversion of investors that had already become noticeable the day before is now likely to increase further.

Investors are currently in an emotional roller coaster, often triggered by the tweets of the currently most powerful man in the world. Pessimism prevailed in trading on Wednesday. As a result, the stock markets declined, and bears took over.

The record hunt on Wall Street came to an end today. The trump threats and the new mood swings between Washington and Beijing made investors nervous.

The Dow Jones opened 0.19 per cent lower at 27,879.55 points and was unable to escape the loss zone even during the trading day. In the end, the minus was 0.41 per cent – the stock market barometer went into the evening at 27,819.28 points. The tech index NASDAQ Composite also fell in the course of trading and left trading at a discount of 0.51 per cent to 8,526.73 index points.

Wall Street hardly responded to the announcement of the minutes of the most recent Federal Reserve meeting. The Fed again gave signals for a pause in interest rates. According to most members, the level of interest rates is “well-aligned” after the recent cut. However, many members still see “high downside risks” for the economic outlook. “In particular, the risks to global economic growth and international trade were still seen as significant,” the protocol continued.

Weak import and export data burdened the Japanese stock market. These had declined for the eleventh time in a row in October. This was interpreted, among other things, as the result of the ongoing trade dispute between the USA and China.

The EuroSTOXX 50 went 0.34 per cent lighter into the evening at 3,683.88 points, after having already started the morning with a minus.

After EuroSTOXX had reached its highest level since spring 2015 on Tuesday, the share price returned on Wednesday.

With the current ups and downs, some investors have headed for safe havens again. Federal bonds were in demand. Yields on ten-year German government bonds fell to minus 0.384 per cent, their lowest level for almost three weeks. Gold, which is coveted as a crisis currency, also rose temporarily by 0.4 per cent to a two-week high of 1,478 dollars per troy ounce.

Investors stocked up on crude oil for fear of supply shortfalls. The North Sea variety Brent increased in price on Wednesday by more than two per cent to 62.37 dollars per barrel. Investors were nervous about the riots in Iran. According to President Hassan Ruhani, the mass demonstrations were provoked from abroad and have now been successfully suppressed. According to the human rights organisation Amnesty International, more than 100 demonstrators have been killed in clashes since the weekend. Furthermore, the US aircraft carrier “Abraham Lincoln” with accompanying ships passed through the Strait of Hormus. One-fifth of the world’s crude oil is transported through the strait.

The most popular cryptocurrencies stabilised on Wednesday. After sharp losses in the previous days, Bitcoin and co holding fairly steady with the Bitcoin price staying above the $8,000 mark. Ethereum is trading at $175 and XRP at $0.25.

SAP supervisory board chairman and co-founder Hasso Plattner has sold shares of the software giant worth around 100 million euros. This was the result of mandatory announcements on Wednesday. According to an SAP spokesman, the 75-year-old still holds an estimated 6.2 per cent of the Walldorf-based company. In February the figure was still 6.3 per cent. Plattner founded SAP in 1972 together with four other IT specialists.

After a good third quarter, the US retail group Target is expecting more profit for the year as a whole. Adjusted earnings per share for the full year are now expected to reach $6.25 to $6.45, as the company announced in Minneapolis on Wednesday. Previously, management had assumed a range of 5.90 to 6.20 dollars.

In the third quarter, Target increased its operating profit by 22 per cent year-on-year to approximately one billion US dollars. Sales increased by approximately 5 per cent to $18.7 billion. The bottom line was an increase in profits of around 15 per cent to 714 million dollars. For the rest of the year, too, the target management expects increasing revenues and profits. The Target share is currently registering gains of 11.94 per cent to $124.09.

Rain of money for Macron: The IPO of the lottery provider La Francaise des Jeux flushes two billion euros into the coffers of the French state. Finance Minister Bruno Le Maire said that 1.8 billion euros of this would flow into an innovation fund. The shares of Francaise des Jeux were placed at the upper end of the price range with 19.90 euros. The state reduces its stake in the company from 72 per cent to 20 per cent. On Thursday, the lottery provider wants to celebrate its stock market debut.