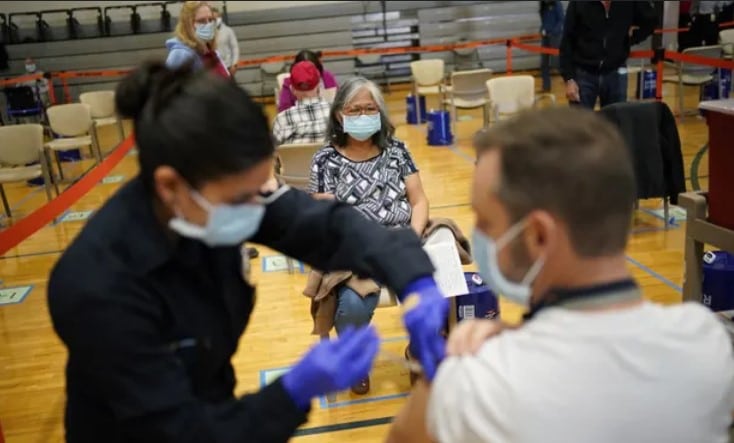 Vaccines for the Market

Today, the stock market was supported after it was announced that the USA reached its vaccination target earlier than thought. US President Joe Biden is reportedly close to reaching his key 100-day target of 200 million Corona vaccinations administered in the country. With the vaccination figures to be released on Thursday, the threshold of 200 million doses injected within his first 100 days in office will be exceeded, Biden said in Washington on Wednesday.

The vaccine news comes when other parts of the world continue to worry about the corona crisis. For example, in Japan and India, infection figures are rising again, and stricter restrictions are putting a strain on the economy, people, and social life.

Wall Street was able to recover some of its losses from the previous day.

Although the Dow Jones lost a little at the beginning of trading, it was able to gain in the further course. In the end, a gain of 0.93 per cent to 34,137.31 points was posted on the price board. The NASDAQ Composite also turned positive and closed with an increase of 1.19 per cent to 13,950.22 points.

However, the mood was weighed down because there were new waves of corona infections in some countries such as India and Japan, which fuelled doubts about the expected global economic recovery, according to market participants. Also, there were repeated warnings of new variants of the COVID-19 virus that might be resistant to available vaccines.

Other than that, investors continued to focus on the quarterly reporting season.

In the wake of Wall Street’s weakening of the previous day, the most important Asian markets also lost ground today.

Market participants saw the tense Corona situation as the reason for the price losses. Especially in India, the infection figures are rising rapidly. This makes an economic recovery even more remote. Also, a state of emergency is to be declared in the greater Tokyo area, and Osaka in Japan, and restrictions on public life are to bring the explosive situation under control.

The European stock exchanges followed Wall Street’s lead and made significant gains today. The EuroSTOXX 50 went into the evening with a plus of 0.91 per cent at 3,976.41 points.

After a firmer start, the DAX temporarily fell into the loss zone and was then able to turn back into the profit zone thanks to a friendly Wall Street. In the end, it closed with a gain of 0.44 per cent at 15,195.97 points. The TecDAX was also able to stay in the profit zone and ended the day 0.26 per cent higher at 3,480.69 points.

After two weaker days on the stock market, prices were thus able to recover somewhat in the middle of the week. However, market participants remained concerned about new restrictions to contain the Corona pandemic. Especially in India, the numbers are exploding at the moment. There is great concern about further and stricter lockdowns, which will push the global economic recovery further back.

However, Europe’s stock markets recovered quickly from a brief, not unhealthy correction, and investors used the recent setback to get back in.

On the foreign exchange market, the euro was able to stabilise and maintain the 1.20 dollar mark. By late evening, the common currency was trading at 1.2027 dollars.

As on the previous day, oil prices were also weighed down today by the development of the corona crisis in India, one of the world’s largest importers of crude oil. A barrel of North Sea Brent crude fell by 65 cents to 65.92 dollars. US WTI oil fell by 72 cents to 61.95 dollars.

Gold, meanwhile, rallied again to close a whopping $16 higher at $1.794 per troy ounce.

Cryptocurrencies continued the consolidation phase they entered on Monday after a sharp decline in prices. Bitcoin is currently hovering between $53,500 and $57,00, while Ethereum seems to be getting a stronger tailwind and increasing by 2 per cent to $2,380. Other altcoins, such as XRP, Polkadot, Binance Coin, Bitcoin Cash, or Cardano, widely followed BTC’s lead and traded within a well-defined range of plus/minus 5-7 per cent.

Inflation in Great Britain picked up slightly in March. Consumer prices rose by 0.7 per cent compared to the same month last year, as the statistics office ONS announced in London on Wednesday. In February, the rate had been 0.4 per cent. Analysts had, on average, expected acceleration to 0.8 per cent. In a monthly comparison, the price level increased by 0.3 per cent. According to the ONS, price increases came from rising prices for fuel and clothing. Food prices, on the other hand, had a dampening effect. Overall inflation is well below the central bank’s inflation target of two per cent. However, experts expect inflation to increase in the coming months.

As expected, the Central Bank of Canada left the key interest rate unchanged on Wednesday but was the first leading central bank to reduce its bond purchases. In the future, the central bank will only buy government bonds with a volume of 3.0 billion Canadian dollars per week, the central bank announced in Ottawa. The central bank has purchased securities in a magnitude of 4.0 billion Canadian dollars per week. The key interest rate, however, will remain at 0.25 per cent, the statement added. The monetary policy decisions had been eagerly awaited on the markets. The Central Bank of Canada is the first of the world’s leading central banks to tighten its extremely loose monetary policy since the corona crisis. On the foreign exchange market, the Canadian dollar reacted with significant gains to the monetary policy decisions. In Canada, sentiment indicators from the economy had recently brightened considerably, pointing to a more robust upswing.