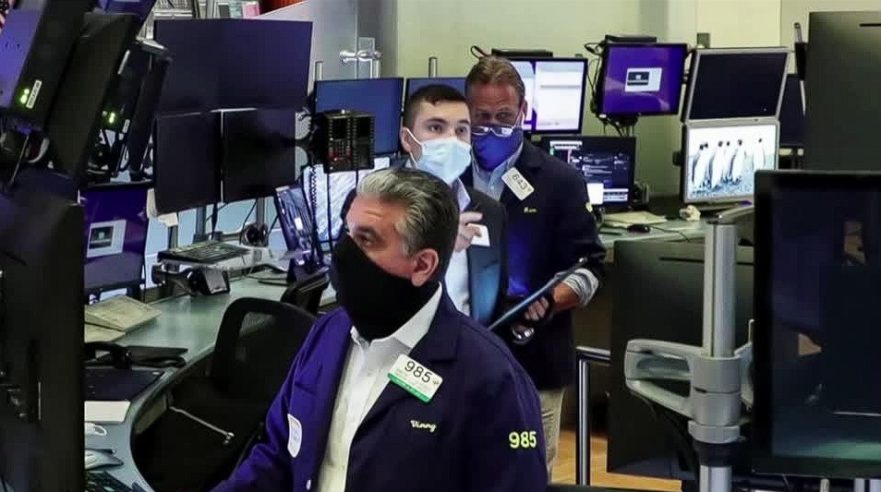 The spectre Corona has the stock exchanges again under control – at least in Europe. Due to the continuing high number of infections and several new lockdowns within Europe, the virus and the politics surrounding it have once again become the spectre of the stock markets.

Even the smouldering hopes for the next trillion-dollar US aid package did not help today – many investors left and pushed the sell button.

The US stock markets were indecisive on Wednesday but ultimately gave in.

The negotiations for a new US economic stimulus package remained in the focus of investors. Nancy Pelosi, US Democratic Party negotiator, spoke of “progress” in the negotiations with the Republicans. In her opinion, the package could be in place by the weekend. But it is unclear whether enough Republican senators will support the package.

According to the US Federal Reserve, the US economy has continued to recover from the slump in the Corona crisis. Economic activity has increased in all districts, according to the Fed’s economic report published on Wednesday (Beige Book). The economy grew “slightly to moderately”. However, the development in the various sectors was very different. The stock markets took note of the Beige Book without excitement.

Solid economic figures from the USA provided only partial support. Investor uncertainty was reflected in low turnover at the trading centres, according to Dow Jones Newswires. The main topic remained the question of how quickly the economy can recover from the effects of the pandemic. Meanwhile, the balance sheet season offered some distraction.

At the end of a dismal trading day, the leading German index Dax 30 also fell by a substantial 1.4 per cent to close at 12,557 points. Especially in late trading, the Dax extended its losses. The TecDAX still hovered around the zero line in early trading, but then also started its descend. It extended its losses and finally ended trading 1.51 per cent weaker at 3,062.32 points.

The rising infection figures, which could endanger the economic recovery, remained in the focus of investors. Also, attention continued to focus on the USA, where the hoped-for US economic stimulus package has been in the works for many weeks but has not produced any actual results yet.

Parallel to this, the balance sheet season for the past quarter gained momentum – stock market experts, however, pointed to partly disappointing company figures and negative analyst comments.

The foreign exchange market turned in favour of the usual safe havens like gold, yen, Swiss franc but also the greenback. The euro, surprisingly, also moved higher against the dollar and ended the NY trading session at 1,1870 US dollars. Amid today’s Brexit optimism, the British pound sterling also received a massive boost, eyeing a break over 1.32 US dollars.

Oil prices also fell on Wednesday due to the renewed deterioration in the economic situation. The barrel of North Sea Brent decreased by 1.28 dollars and most recently cost 41.88 US dollars. The light oil variety West Texas Intermediate (WTI) fell by 1.42 dollars to 40.07 US dollars.

As mentioned above, gold appreciated amidst the latest hopes for a new trillion-dollar-heavy financial injection into the markets and shot through many major resistance levels towards $1,935 an ounce. In late trading, the precious metal came off its daily highs and closed at $1,913 per troy ounce.

The cryptocurrency space was surging again after news broke that PayPal is now offering digital assets on their platform. This further legitimises the often as “illegal” marked crypto-market. Bitcoin is closing in on the $13,000 mark, increasing its value by 3 per cent, while Ethereum gained 4.2 per cent to $397 and XRP rising 4.1 per cent to $0.2590. Litecoin surged by a whopping 14.4 per cent to $55.69 after PayPal’s news also included Litecoin.

According to a media report, Uber, the US transportation services agency, wants to buy the jointly operated cab and chauffeur agency “FreeNow” from car manufacturers Daimler and BMW for more than one billion euros. Uber’s boss Dara Khosrowshahi is offering each of them a high triple-digit million Euro purchase price, the “Manager Magazin” reported on Wednesday with reference to industry circles.

There are negotiations, BMW confirmed in Munich on Wednesday. The driving service provider Free Now is owned equally by BMW and Daimler. The company was formerly known as mytaxi. It offers driving services in over 100 cities with more than 100,000 drivers.

The Snapchat nut/mother Snap presented after US stock exchange conclusion the characteristic numbers to the past quarter. Surprisingly, Snap increased sales in the third quarter by 52 per cent to 679 million dollars year-on-year. This clearly exceeded analysts’ expectations – and can be a signal for strong advertising business even in the Corona crisis. One concern in the market is that companies affected by the pandemic are cutting back on their advertising, which is causing the business of Internet platforms to plummet.

Snap’s quarterly figures impressed investors and analysts alike on Wednesday. The shares of the company that operates the photo app Snapchat gained over 30 per cent on the NYSE and at times were at a record high of USD 38.54. In the end, they rose by 28.30 per cent to 36.50 US dollars.

The entrance into the business with cryptocurrencies inspires PayPal. The shares of the payment service provider are soaring 4.7 per cent on Wall Street. Initially, customers in the USA can buy, sell and hold Bitcoin and other cyber currencies via PayPal as the US company communicated on Wednesday. From the beginning of 2021, it will also be possible to pay merchants via Paypal with cryptocurrencies.

Nasdaq profits from the crisis

Lively trading on the stock exchanges and the business with information services has helped the transatlantic stock exchange operator to a leap in profits. In the third quarter, net income rose by almost 77 per cent to $264 million compared to the same period last year.

The Group operates not only the US technology exchange of the same name but also several exchanges in Europe. The temporary weakening of the corona pandemic over the summer and the open money floodgates of the central banks had at times driven the US stock exchanges to record highs and boosted trade on the financial markets.