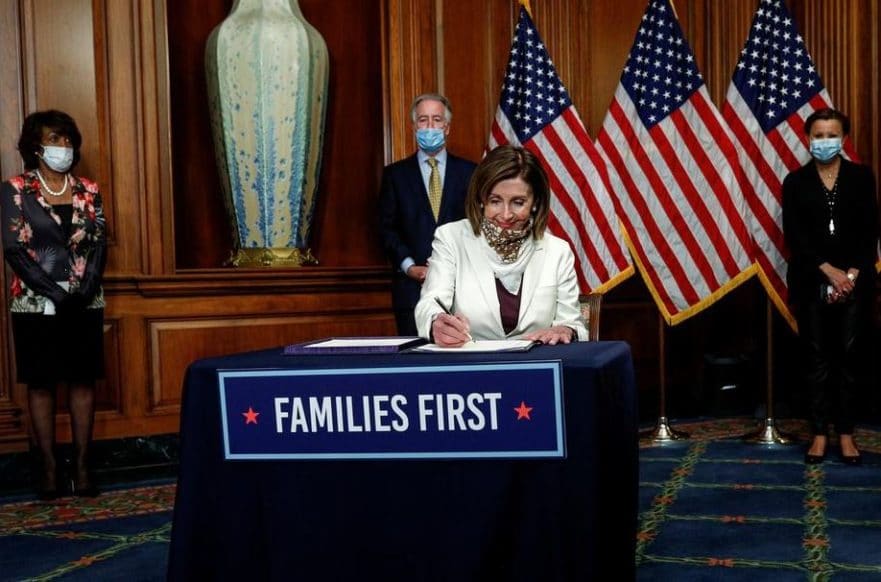 After the slide of the previous day, the markets in Europe and the USA have recovered today. The stock exchanges in the Far East, however, showed different signs.

The corona crisis is far from under control, and the global oil market has effectively collapsed – but all this does not challenge investors when it comes to the prospect of fresh injections of money that states around the world are pumping into the economy to counter an impending recession.

In the USA the Senate has approved a further 500 billion dollar economic stimulus package. In addition, the Fed is already on the market with billions of dollars in securities purchases, thus providing a never-ending flood of artificial liquidity.

How long can this current arrangement function before it all collapses – or before we will finally see the introduction of a new financial system..?

On Wednesday the US stock exchanges recovered from the oil price shock of the previous day.

The Dow Jones 30 Industrial, the US leading index, was trading firmer and remained on green ground after that. In the end, the index ended the day with a 1.99 per cent gain of 23,475.82 units. The technology-oriented selection index NASDAQ Composite also recorded gains, having already registered substantial gains at the opening of trading. It closed the day with a price gain of 2.81 per cent to 8,495.38 index points.

Following the collapse of oil prices, markets worldwide showed signs of stabilisation in the middle of the week. Although oil prices remained at a very low level, the decline in prices initially seemed to have come to a halt. A new US economic stimulus package to cushion the effects of the coronavirus also provided support. Most of the money in the new corona aid package was earmarked for small and medium-sized companies.

The Japanese leading index Nikkei 225, closed 1.1 per cent lower at 19,078 points. In China, the CSI 300, which comprises the 300 most essential stocks on the Chinese mainland stock exchanges, lost 0.1 per cent and the Hang Seng in Hong Kong fell by just over half a per cent.

The European stock markets were stronger in the middle of the week. The EuroSTOXX 50 showed green signs after opening the morning session with a slight gain. At the end of trading, it recorded an increase of 1.56 per cent to 2,834.90 index units.

The oil market remains hugely turbulent. After US crude oil, in particular, had been under pressure since Monday, European Brent crude was also hit in the middle of the week. The price of a barrel fell on Wednesday to USD 15.98, its lowest level since 1999, and the US variety West Texas Intermediate (WTI) also continued its downward trend at first. In the afternoon, however, prices recovered, and a barrel of North Sea Brent costs $20.45. The US variety WTI traded at 14.33 dollars per barrel.

Cryptocurrencies were on the rise again yesterday, and the overall market capitalisation of digital assets rose to over $206 billion. Bitcoin gained 4 per cent and rose back over the important $7,000 mark to $7,150. Ethereum increased by over 6 per cent to $183 and “Ripple’s” XRP recorded a plus of over 3 per cent to $0.19.

The ailing US airline United Airlines has raised a much-needed billion-euro sum with a capital increase in the Corona crisis. With the issue of 39.25 million shares, the company raised around one billion US dollars (922 million euros) from investors, as it announced in Chicago on Wednesday night. The airline is under heavy pressure due to the corona pandemic, which has brought air traffic to a standstill.

The announced capital increase was not well received by investors, with the United Airlines share ultimately plummeting 7.17 per cent to 25.88 US dollars in Nasdaq trading. Since the beginning of the year, the share price has already fallen by almost 70 per cent.

The paper of the German airline fell back to 2003 levels. The news from the sector remains disastrous. With the airline LGW, for example, a service provider working for the group subsidiary Eurowings today filed for bankruptcy – the next victim of the crisis. In the afternoon, insiders reported that the French and Dutch governments intend to support the airline Air France-KLM with a total of ten billion euros.

According to experts, the Turkish central bank is on a risky path: On the one hand, the effects of the corona crisis and the falling inflation – a consequence of the oil price slump – argue for low key interest rates. On the other hand, the key interest rate has been well below the inflation rate for some time now. The Turkish national currency has therefore been under devaluation pressure for some time. After the interest rate decision, the Lira declined moderately both against the US Dollar and the Euro.