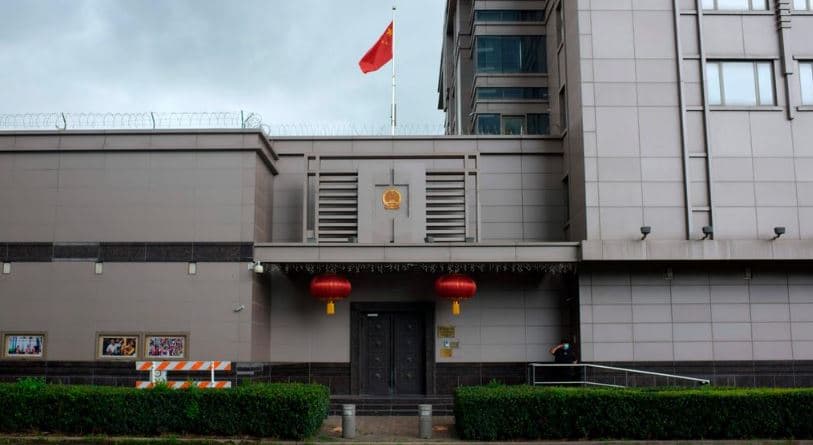 Houston, we have a problem!

Overall, the mood on the financial markets has clouded over again today.

The USA ordered the closure of the Chinese consulate in the Texas city of Houston. China’s foreign office spokesman Wang Wenbin spoke to the press in Beijing on Wednesday, calling the move “outrageous and unjustified”. The closure of the consulate is likely to be followed by a diplomatic battle, at the end of which many American diplomats in China will probably also have to pack their bags. According to sources, China is already thinking to retaliate by closing the US consulate in Wuhan.

In addition, the ongoing corona worries in the USA and some other nations are additionally dampening the buying mood.

Furthermore, the day after the agreement in Brussels, many investors are looking at the historic financial package in a more sober light. On the one hand, the distribution of the money is still a long way off. On the other hand, the subsidies for Spain, Italy and Greece, as well as Eastern European countries, are small when compared with the enormous economic stimulus package that Germany has provided for its economy alone.

The US stock markets ended the trading day with gains in a tense environment.

The Dow Jones searched for its direction over long stretches of trading but ended up 0.66 per cent firmer at 27,005.66 points. Meanwhile, the NASDAQ Composite had to give up some of its gains, ending the day up 0.24 per cent to 10,706.13 index points.

Besides the ongoing tensions between China and the United States, quarterly reports from some companies were again on the agenda. Among others, the heavyweights Tesla, Microsoft and United Airlines presented their latest business figures.

Asia’s stock markets didn’t find a common direction today. The Nikkei index in Tokyo fell by 0.58 per cent to 22,751.61 points by the end of trading.

Asia’s stock markets thus followed the lead of the US markets from yesterday. Uncertainty about an extension of corona aid in the USA put some pressure on the mood on the stock markets. Politicians expressed doubts as to whether an agreement between Republicans and Democrats could be reached. Besides, the conflict between the US and China seems to be growing more acute again.

In Japan, moreover, there some traders probably took profits before the two upcoming holidays.

Disillusionment returned to the German stock market after the rejoicing over the EU agreement on the large Corona Reconstruction Fund. The Dax 30 ended its three-day rally, closing 0.5 per cent lower at just over 13,100 points. Investors took profits after the leading German index climbed to 13,313 points yesterday. In contrast, the TecDAX closed 1.12 per cent higher at 3,171.85 index points, having started the trading day 0.01 per cent higher at only 3,136.99 points.

In the middle of the week, profits were taken on European stock markets. The corona pandemic remains an uncertainty factor, and the number of cases in the USA continues to rise. However, some traders spoke of a standard breather after the recent rally.

The foreign exchange and commodities market was once again hot today, and the euro temporarily rose to its highest level since October 2018. In afternoon trading, the rate rose to as high as USD 1.1601. Most recently, it was only slightly below that level. In the morning, the euro had at times, just exceeded the 1.15 US dollar mark. The European Central Bank (ECB) set the reference rate at 1.1578 (Tuesday: 1.1443) US dollars.

Oil prices on Wednesday gave up some of their significant markups from the previous day. Most recently, a barrel of North Sea Brent cost 43.84 US dollars, 48 cents less than on Tuesday. The price of a barrel WTI oil fell by 51 cents to 41.41 US dollars. On Tuesday, oil prices had reached the highest level in about four months.

The focus remains on the gold and silver bull market. After the EU decision, fears of inflation arose from which the metals are profiting. While silver, which is also used as an industrial metal, sees some profit-taking and the price is barely moving upwards, the cost of the precious metal gold continues to rise – to currently $1,863 an ounce.

Cryptocurrencies remained widely unchanged today, with XRP being one of the top movers of the ten most valuable digital assets, crossing over the $0.20 mark with a 1.2 per cent gain on the daily. Bitcoin and Ethereum remained at their price levels of the previous day at $9,350 and $244 respectively.

Biontech off to new heights

The order for 100 million doses of Covid vaccine from the USA on Wednesday gave a further boost to Biontech’s papers. Biontech papers climbed 7.5 per cent to a new high. The shares of cooperation partner Pfizer also rose above average. Only at the beginning of the week, a supply agreement with Great Britain for 30 million containers had boosted the share price.

US electric carmaker Tesla achieved another quarterly profit despite the negative impact of the current pandemic. The bottom line for the three months to the end of June was a net profit of 104 million US dollars, as reported by the group of tech billionaire Elon Musk on Wednesday in Palo Alto after the US stock market closed. Last year there had been a high loss.

Tesla’s quarterly figures exceeded analysts’ expectations. The Tesla share, which is listed on the NASDAQ, was 2.80 per cent stronger in post-trading at $1,635.00. On the financial market, Musk’s company is the high-flyer par excellence this year anyway, with a price increase of around 280 per cent so far. The stock market value recently even shot well over the 300 billion dollar mark at times, meaning that Tesla is trading higher than all other car manufacturers.

In the fraud scandal at the Dax group Wirecard, the Munich public prosecutor’s office has issued three arrest warrants against former executives, including former CEO Markus Braun and a former CFO. Among other things, the warrants concern commercial gang fraud and market manipulation in several cases, said a spokeswoman for the public prosecutor’s office. A key witness and other documents had helped the investigators: According to these documents, the persons concerned are said to have decided as early as 2015 to “inflate” Wirecard’s balance sheet. The three accused had been arrested in Munich, she said and had not turned themselves in.