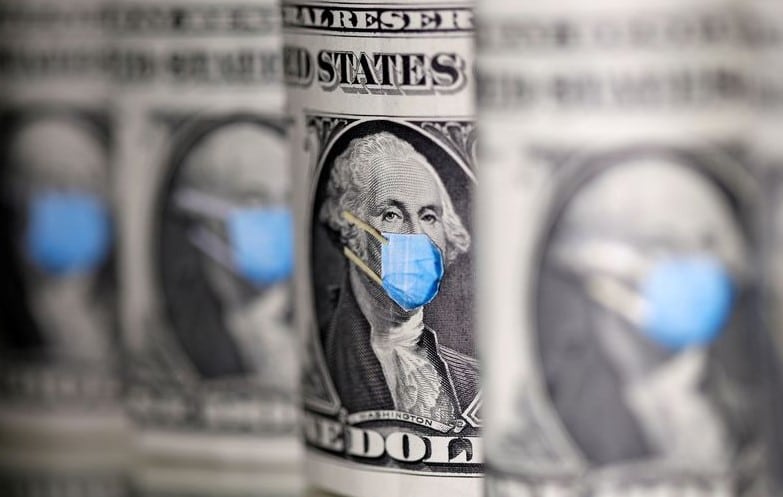 The greenback is currently the big winner of the week, continuously gaining strength and therefore reflecting the current situation in the markets beautifully.

Because ever more dreadful corona news and a weakening US stock market ensured that other global indices were also unable to maintain initial profits and once again fell sharply. Investors remain nervous after Monday’s “mini-crash” and shy away from risk. The logical consequence: money is flowing out of asset classes such as stocks and commodities but also out of Oceanic currencies (commodity-linked) and into the US dollar, which is considered a safe haven in times of crisis.

The fact that the precious metal gold, which is usually seen as an equally safe haven, is, on the one hand, remarkable, but on the other hand it is also a signal that all assets are currently being liquidated again. We could already observe something similar in the middle of the crisis in March. Due to a multitude of fundamental data, most analysts still see the precious yellow metal shining again in the mid to long term.

Partly because of the party-political tug-of-war over a new economic stimulus package and the upcoming presidential election in the United States, investors shied away from greater risks and increasingly looked to burdening factors.

Wall Street declined significantly in the day. The Dow Jones fell back to red territory and closed 1.92 per cent weaker at 26,763.13 points. The NASDAQ Composite fell even sharper with a 3.02 per cent loss to 10,632.99 index units.

Uncertainty in the market remains high. The global economy is only recovering slowly and could be further slowed down by a new wave of the virus.

Besides, the US presidential election campaign also moved more into the focus of investors. As a result, market participants also fear an intensification of the US-Chinese conflict.

The Asian markets remained almost unchanged today. In Japan, the Nikkei was just 0.06 per cent lower at 23,346.49 points after the holiday break of several days.

A lack of momentum ensured a quiet trading day in Asia. Furthermore, the negative factors remained the same: No progress in the US-Chinese trade dispute, no agreement on a further US economic stimulus package and rising case numbers of corona patients.

European stock markets continued their friendly trend in European business on Wednesday but later lost ground in the wake of a struggling Wall Street. The EuroSTOXX 50 gained 0.51 per cent to 3,180.11 index units.

The markets were supported by purchasing managers’ indices from the manufacturing sector in the eurozone. However, the PMIs for the service sector painted a different picture, falling lower than expected by analysts.

On the foreign exchange market, the euro roughly maintained its low level from the European session in US trading on Wednesday. The European common currency was last traded at 1.1657 US dollars, the lowest level since the end of July. As mentioned earlier, other major currencies also weakened against the dollar. The British pound, the Canadian dollar, the Australian dollar and the New Zealand dollar all fell again considerably.

Oil prices rose marginally again despite the weakening financial markets. The barrel price of Brent increased by 25 cents to currently 41.97 US dollars while WTI oil prices rose by 18 cents to 39.98 US dollars per barrel. The current production policy of the Opec+ oil network provided support. The association has been restricting its crude oil production for a long time to support the prices in the Corona crisis. So far, this has been successful, but not all countries are complying with the agreements to the same extent. The oil giant Saudi Arabia is, therefore pressing for compliance with the deal.

Gold weakened further in the wake of the recent dollar strength and fell well below the $1,900 mark. Currently, the troy ounce is traded at around 1,855 US dollars.

Despite the looming economic crisis, cryptocurrencies and the digital assets space seemingly continue to be disregarded. Bitcoin and co continued their descent on Wednesday as well, and the overall market capitalization is now at only 322 billion US dollars. Bitcoin is trading 1.3 per cent lower compared to Tuesday at $10,300, Ethereum even lost 3.65 per cent to $325, and XRP retreated 3.6 per cent to just $0.2240.

Across the board, both the eurozone as well as the individual PMIs of European countries and also the UK painted a split picture between the manufacturing and service sectors. Overall, the Markit Composite PMI Flash for the eurozone came in at 50.1 points, lower than expected (51.7), Burdening factor was the service sector where the PMI was reported at only 47.6 versus 50.5 expected. The manufacturing PMI, on the other hand, climbed to 53.7 points versus 51.9 anticipated.

Meanwhile, activity in the US economy slowed down in September. The composite index compiled by IHS Markit fell from 54.6 points in the previous month to 54.4.

The world’s largest sporting goods manufacturer has so far weathered the Corona crisis much better than expected thanks to booming online trade and a recovery in demand in China. The Adidas rival exceeded analysts’ estimates for profits and sales in the first quarter. The bottom line was earnings of $1.52 billion (previous year: $1.37 billion), the company reported. Sales declined slightly by 0.6 per cent to $10.6 billion. In China, however, revenues climbed by 6 per cent. The Nike share jumped 9 per cent higher on the NY stock exchange.

The hemp company Aurora Cannabis presented the key figures for the past quarter and the past financial year on Tuesday after the close of the US stock exchange.

The Canadians did not report a loss per share. Experts had previously assumed a negative result of CAD 0.601 per share. The bottom line was a loss of 1.86 billion CAD. In the same quarter of the previous year, the Group was still able to report a break-even result.

On the sales side, Aurora Cannabis undercut analysts’ forecasts of CAD 74 million. The company generated sales of CAD 72.11 million, compared to CAD 99 million in the same period last year.

For the fiscal year 2020, Aurora reported sales of CAD 278.91 million. A year earlier, the company’s books still contained CAD 245.54 million. The loss for the past twelve months amounts to CAD 3.31 billion; in 2019 the loss was still a negative result of CAD 290.8 million. The NYSE-listed Aurora Cannabis stock ultimately plunged 29.37 per cent to $5.17 in NYSE trading.