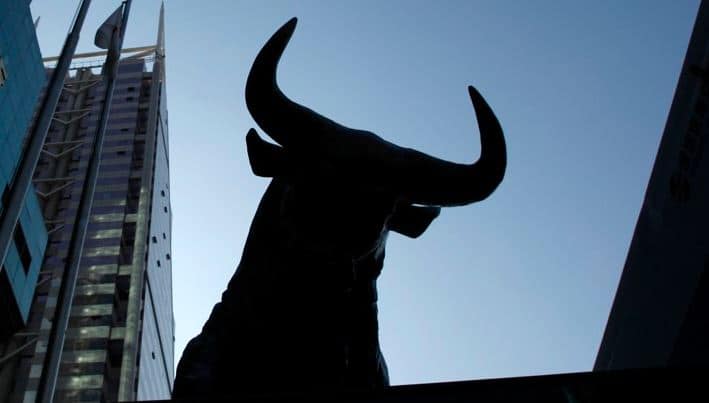 Investors in the German stock market are currently not being deterred by anything – especially not by the ongoing Brexit chaos. On Wednesday, the leading index even briefly climbed to a new high for the year. How is this possible despite an unfavourable global economic outlook, Brexit and co?

The high of 12,819 points on Wednesday is an indication that the bulls are still in charge on the Frankfurt Stock Exchange, explained Jochen Stanzl, Chief Market Analyst at CMC Markets. The Dax managed to make up for its initial losses and even gained 43.50 points, or 0.34 per cent, by the end of trading at 12,798 points.

“Without Brexit and the trade war, stocks would not be as cheap as they are now,” said Jochen Stanzl. “That’s why prices always jump up when even the smallest window opens to solve the problems.”

After the British Parliament forced the brakes on Brexit to be applied, the EU states are now considering extending the deadline. The Irish Prime Minister was the first of the 27 heads of state and government to give his approval. EU Council President Donald Tusk and EU Parliament President David Sassoli also pleaded for a postponement of Britain’s withdrawal from the EU until the end of January 2020.

Fundamentally, the signs for the European economy continue to point to a downturn. The spending mood of consumers in the eurozone, for example, unexpectedly deteriorated significantly in October. The barometer for consumer confidence fell by 1.1 to minus 7.6 points, according to data published by the EU Commission on Wednesday. Economists surveyed by Reuters had only expected minus 6.7 points.

The Dow Jones opened a little higher and has been floating around the zero line throughout the US trading session. In the end, it closed 0.17 per cent higher at 26,833.17 points. The NASDAQ Composite also got off to a somewhat easier start and also moved between profit and loss. By the end of trading, it had finally risen by 0.19 per cent to 8,119.79 units.

Trading was dominated by sharp price fluctuations of heavyweights’ shares in some cases. This week, the US reporting season reaches its peak in the third quarter. The results published so far have painted a mixed picture. On Wednesday, the technology sector was burdened by a profit warning from Texas Instruments.

The majority of the major Asian indices were lower on Wednesday.

In Asia, the majority of the markets followed the somewhat weaker targets from the USA. Here, the last quarterly results were mixed. Uncertainty factors such as the US-Chinese trade dispute and the Brexit chaos persisted. “Besides the Brexit, the rather mixed US quarterly results are a rather weak target for the Asian markets,” Jingyi Pan of IG commented on Dow Jones Newswires. In Hong Kong, there was also a media report that the head of China’s special administrative zone, Carrie Lam, could be replaced.

The EuroSTOXX 50 had a weaker start and ended the day with a small plus of 0.06 per cent at 3,606.89 units. In Germany, the DAX had opened the morning with a loss, but then investors hesitantly ventured out of cover, so that the German benchmark index went 0.34 per cent firmer at 12,798.19 points in the evening. The TecDAX, on the other hand, started with a small loss, then expanded it and closed 0.70 per cent weaker at 2,808.94 points. Above all, weak semiconductor stocks dragged it down.

Once again, all eyes were on Great Britain: Here a regulated EU withdrawal until the end of October seems increasingly unlikely. New elections, a further Brexit extension or even a “hard Brexit”, these are the possibilities that could be imminent. Even within the EU, member states must now vote on whether they want to accept the application for a Brexit extension until the end of January, which has already been submitted by Great Britain.

The euro fell on Wednesday. The European Central Bank (ECB) set the reference price at 1.1128 dollars. At the close of trading, the euro was quoted at 1.1117 dollars. The emergency brake on the Brexit forced by the British Parliament unsettled investors and weighed somewhat on both the euro and the pound. The evening before, MEPs in London had failed the tight timetable for the Brexit consultations. British Prime Minister Boris Johnson then put the entire legislative process on ice. Observers believe the Kingdom may be heading for new elections.

Oil prices have fallen following the renewed rise in oil reserves in the USA. Most recently, a barrel (159 litres) of Brent crude cost 59.19 US dollars. That was 51 cents less than the previous day. The price for a barrel of West Texas Intermediate (WTI) fell by 56 cents to 53.92 dollars. The evening before it had become known that the American Petroleum Institute (API) had recorded an increase in crude oil stocks of 4.45 million barrels last week.

The cryptocurrency market was shown to be very unfriendly yesterday. Top digital assets such as Bitcoin, Ethereum, XRP, Litecoin and co dropped sharply, and as ever so often almost in synch, by around 8 per cent. One Bitcoin currently costs approximately $7,500, one Ethereum $161 and one XRP $0.27.

What caused this market reaction is not clear as of writing, but since the market is still in its infant state, high volatility can be witnessed regularly.

The Texas Instruments chip group suffered an eleven per cent drop in sales to $3.77 billion in the past quarter. Net income fell by nine per cent to $1.43 billion. For the current quarter, the company forecast revenues of $3.07 billion to $3.33 billion, falling short of analysts’ average expectations of $3.59 billion. The share price slumped by almost ten per cent after the close of trading.

PayPal presented its balance sheet for the past quarter on Wednesday after the close of the US stock market.

Trade with the Best Forex Brokers that accept PayPal

The payment service provider PayPal presented its figures for the past third quarter of 2019 on Wednesday evening and thus fulfilled the analysts’ estimates.

EPS in the reporting period was 0.61 US dollars, while experts had forecast earnings per share of 0.52 US dollars. EPS of USD 0.580 was generated in the prior-year quarter.

Turnover was estimated at 4.38 billion US dollars, after 3.683 billion US dollars in the same quarter of the previous year. Analysts’ expectations averaged $4.357 billion. The PayPal share price on the Nasdaq rose by 5.03 per cent to 101.50 US dollars after trading hours.

The continuing flight ban on Boeing’s medium-haul jet 737 Max caused the US aircraft manufacturer a sharp drop in profits in the third quarter as well. On balance, the Airbus rival earned just under 1.2 billion dollars, just under half as much as a year earlier, as it announced in Chicago on Wednesday. Turnover dropped by 21 per cent to just under 20 billion dollars due to the halt in delivery of the aircraft type that had previously been the most in demand. But Boeing is confident that it will be able to put the crisis jet back into operation in the fourth quarter. This gave the share a boost.